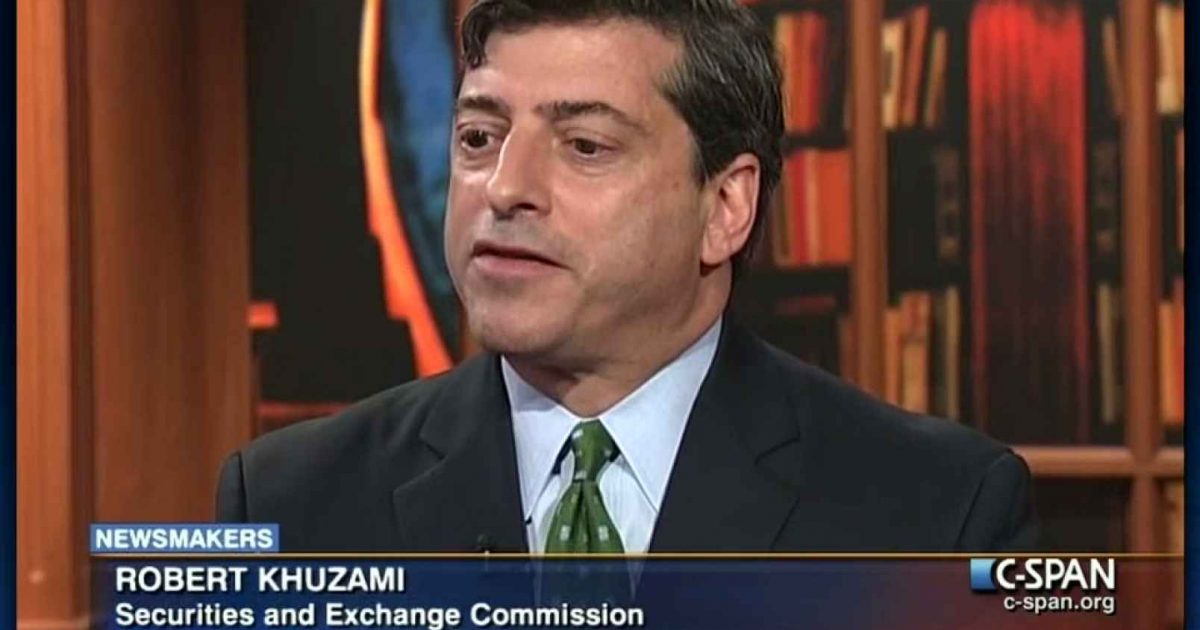 The inmates are running the asylum and locking up the guards.

When the media first began to spin the raid on the president’s lawyer, they claimed that it had been approved by a Trump appointee. Of course, it hadn’t. It came from Rosenstein on one end. And Trump’s appointee had recused himself. That left his deputy, an Obama holdover.

Robert Khuzami. And there are reports that he allegedly made the decision.

Khuzami was in charge of SEC enforcement under Obama. He did speak at the RNC convention in ’04 in support of the Patriot Act and donated to McCain in ’08. But as we’ve seen with Mueller, that kind of thing is old news. The much more significant factor is his SEC gig.

And he has quite the stunning history.

If you really wanted truth and justice and all that from your SEC, you probably wouldn’t go for someone who “worked with lawyers (at Deutsche Bank) who advised on the CDOs issued by the German bank and how details about them should be disclosed to investors,” as The Wall Street Journal noted three years ago.

Hope and change. And it just got worse from there.

On September 27, 2011, the SEC Inspector General released a report revealing that this anonymous attorney at the SEC had sent a letter to the Inspector General, blowing the whistle on the former SEC Director of Enforcement, Robert Khuzami. The whistleblower was complaining about Khuzami’s handling of charges that Citigroup executives had intentionally misled public investors about its exposure to subprime mortgages, understating the amount by $37 billion in the fall of 2007. According to the Inspector General’s report, the whistleblower alleged that:

“…just before the staff’s recommendation was presented to the Commission, Enforcement Director Robert Khuzami had a ‘secret conversation’ with his ‘good friend’ and former colleague, a prominent defense counsel representing Citigroup, during which Khuzami agreed to drop the contested fraud charges against the second individual. The complaint further alleged that the Enforcement staff were ‘forced to drop the fraud charges that were part of the settlement with the other individual,’ and that both individuals were also represented by Khuzami’s friends and former colleagues, creating the appearance that Khuzami’s decision was ‘made as a special favor to them and perhaps to protect a Wall Street firm for political reasons.’ ”

And worse and worse.

From now on, Khuzami said, when corporate lawyers like the ones he was addressing want to know if their Wall Street clients are going to be charged by the Justice Department before deciding whether to come forward, all they have to do is ask the SEC.

“We are going to try to get those individuals answers,” Khuzami announced, as to “whether or not there is criminal interest in the case — so that defense counsel can have as much information as possible in deciding whether or not to choose to sign up their client.”

Aguirre, listening in the crowd, couldn’t believe Khuzami’s brazenness. The SEC’s enforcement director was saying, in essence, that firms like Goldman Sachs and AIG and Lehman Brothers will henceforth be able to get the SEC to act as a middleman between them and the Justice Department, negotiating fines as a way out of jail time. Khuzami was basically outlining a four-step system for banks and their executives to buy their way out of prison. “First, the SEC and Wall Street player make an agreement on a fine that the player will pay to the SEC,” Aguirre says. “Then the Justice Department commits itself to pass, so that the player knows he’s ‘safe.’ Third, the player pays the SEC — and fourth, the player gets a pass from the Justice Department.”

Earlier this month, when Sen. Chuck Grassley found out about Khuzami’s comments, he sent the SEC a letter noting that the agency’s own enforcement manual not only prohibits such “answer getting,” it even bars the SEC from giving defendants the Justice Department’s phone number.

Khuzami’s letter to Grassley is the latest twist in an ongoing saga that first began in July 2010 after Darcy Flynn, an agency lawyer, complained that important early-stage investigative records were being improperly discarded.

Flynn took his concerns to the National Archives and Records Administration (NARA), which last month issued a statement declaring that the SEC had indeed destroyed the records without the proper authority. NARA noted, however, that the SEC had stopped destroying the records and was working with NARA on a new records retention policy.

Khuzami’s letter is a response to Grassley, who last month demanded answers from the SEC after learning of Flynn’s allegations about the MUI document destruction. Grassley had said that Flynn told him the records of major high-profile cases including Bernard Madoff, Goldman Sachs, trading in AIG credit-default swaps, alleged frauds at Wells Fargo and Bank of America, and insider-trading probes at Deutsche Bank, Lehman Brothers and the hedge fund SAC Capital.

More recently, a letter to the SEC from Flynn’s attorney, Gary Aguirre, also raised concerns documents from more formal investigations have also been discarded. The SEC has since ceased destroying all investigative records until further notice.

In Khuzami’s letter to Grassley, he downplayed the importance of some of the kinds of documents that may have been discarded.

After all this, why was an Obama holdover with such a track record allowed the No. 2 spot? Because once again there’s no organized big picture plan. The other side keeps embedding its people. And then pulls off coups like this.

Year One should have seen a crackdown on the corruption of the Obama era. It’s still not too late.

The bottom line is that the Trump administration will either aggressively push back by declassifying, exposing and prosecuting misconduct from the Obama years. Or it will be targeted by increasingly aggressive measures orchestrated by the very people it should have been going after.