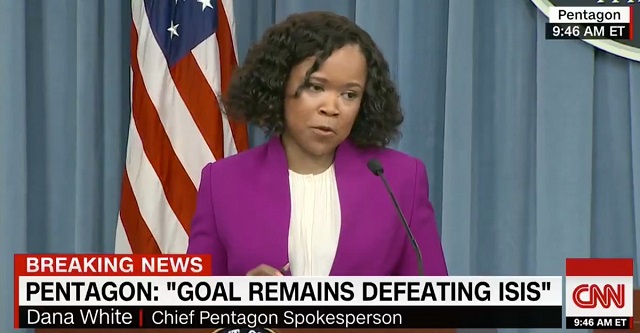 In a moment reminiscent of CNN’s Chris Cuomo saying Americans can only learn of Wikileaks “through us,” Pentagon spokeswoman Dana White said Friday that “Russian trolls” are on the loose trying to sow discord on social media and therefor you should only trust the Pentagon’s “facts” moving forward.

General Mattis said Friday, “Based on recent experience, we fully expect a significant disinformation campaign over the coming days by those who have aligned themselves with the Assad regime.”

White said Saturday: “As Secretary Mattis said last night, the Russian disinformation campaign has already begun. There has been a 2,000 percent increase in Russian trolls in the last 24 hours. Therefore, we will keep you all abreast of the facts moving forward.”

Pentagon spokesperson on strikes in Syria: “The Russian disinformation campaign has already begun. There has been a 2,000% increase in Russian trolls in the last 24 hours.” https://t.co/0Bzv1nm4q6 pic.twitter.com/va1zq5qF3m

She provided no source for her claim, though odds are it’s the entirely fraudulent Hamilton 68 dashboard which was started by Bill Kristol, CIA officials and other Democrat neocons that refuses to identify any of the alleged “Russian trolls” they claim to be tracking.

Regardless, it’s clear this whole “Russian trolls” scheme is now going to be used by the White House to quell dissent.