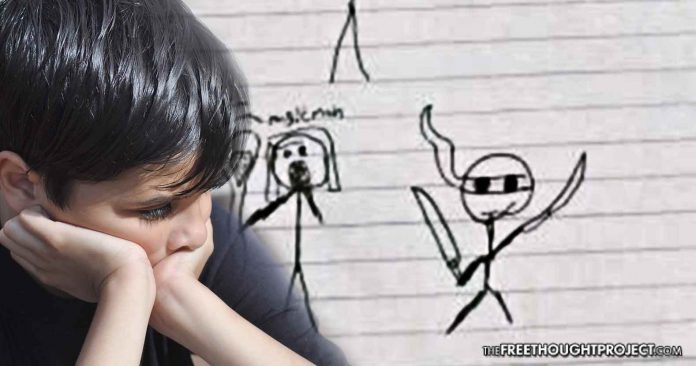 In coming to the defense of a 13-year-old student at Roseboro-Salemburg Middle School who was suspended for two days for doodling stick-figure drawings that included a Ninja Turtle holding swords in each hand, another stick figure aiming a rifle, a souped-up car, a magician, and a tower with a bow and arrow, Rutherford Institute attorneys assert that the punishment infringes on the student’s First Amendment right of expression, is excessive and is contrary to district policies guaranteeing children a right to an education.

Moreover, Institute attorneys points out that the drawings were not seen by any other student, did not cause any disruption of the school, did not threaten anyone, and had no impact on the safety of anyone.

“There are hundreds of cases like this around the nation involving young people who are being suspended, expelled, and even arrested under school policies that criminalize childish behavior and punish all offenses severely, no matter how minor the so-called infraction may be,” said constitutional attorney John W. Whitehead, president of The Rutherford Institute and author of Battlefield America: The War on the American People.

“We all want to keep the schools safe, but it is far better to see something credible done about actual threats, rather than this ongoing, senseless targeting of childish behavior that poses no threat, causes no disruption and is a creative and healthy part of childhood.”

After finishing his assignments and waiting for the rest of his class to finish, a 13-year-old student at Roseboro-Salemburg Middle School began doodling on notebook paper. He drew stick-figures that included a Ninja Turtle holding swords in each hand, another stick figure aiming a rifle, a souped-up car, a magician, and a tower with a bow and arrow.

Nothing in the drawings depicted violence toward any person. When the classroom teacher saw the drawings, they were confiscated and the student was taken to the principal’s office. Once there, the student, who had not been subject to discipline previously, was suspended for two days. School officials did not warn the student or consult with the student’s parents before imposing the suspension.

While the student handbook provides that a suspension is allowed for first-time offenses such as fighting, threatening students or staff, or possession of a dangerous object, Rutherford Institute attorneys point out that “there is simply no evidence suggesting that a drawing of individually posed stick figures with swords and a gun with no other context could rise to the same level of severity as threats of violence or actual violence against others.”

Additionally, Institute attorneys contend that the suspension violated the student’s First Amendment right to engage in expression, including drawing, that does not cause disruption in the school.

Constitutional attorney and author John W. Whitehead is founder and president of The Rutherford Institute. His new book Battlefield America: The War on the American People (SelectBooks, 2015) is available online at www.amazon.com. Whitehead can be contacted at [email protected].