(Natural News) The Office of the Inspector General, U.S. Dept. of Justice, has released a stunning new report that exposes the criminality and corruption of the FBI. Read the full report at this link.

The investigative report concludes that Andrew McCabe — who spearheaded the “deep state” operation to cover up the crimes of Hillary Clinton while falsely accusing President Trump of colluding with “the Russians” — lied under oath and violated FBI Offense Codes 2.5 and 2.6. Labeled “misconduct” in the report, McCabe’s behavior may subject him to criminal indictment.

Here are the most significant findings of the report, as detailed by The Gateway Pundit, which has conducted a detailed analysis (see below). To follow continuing coverage of the crimes of James Comey, Hillary Clinton and the FBI, read JamesComey.news, Clinton.news and DeepState.news. 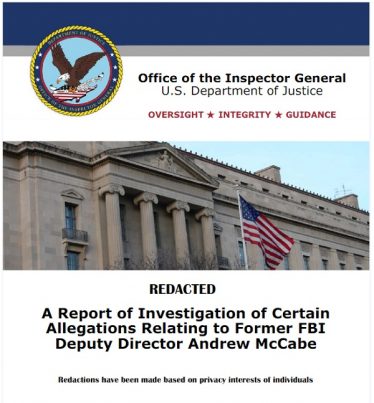 1. In the second paragraph of the introduction of the IG’s report, now infamous cheater and Peter Strzok mistress, and McCabe’s former Special Counsel, Lisa Page, is implicated as being involved in McCabe’s crimes. (p.1)

2. Clinton Foundation was under investigation in 2016 but the FBI decided not to release this information to the public. This information was finally leaked just before the election to the Wall Street Journal and confirmed in a second leak instigated by McCabe. (p. 1)

3. In McCabe’s leak to the WSJ, he refutes that he was being impartial to Clinton due to his connections from his wife’s State Senate run. He then leaked that the Justice Department tried to shut down Clinton Foundation investigation but by doing this confirmed to the public in his leak that the investigation was in place. (p. 1)

6. McCabe lied numerous times to either investigators or inspectors and said he didn’t know why Lisa Page leaked information to the Wall Street Journal. He even lied and said that he was outside of Washington D.C when the leak occurred which was not true. (p. 2)

9. McCabe states that leaking to the WSJ was the only time in his career “where he had authorized the disclosure to the media of a one-on-one discussion that he had with a member of the Department’s leadership.” (p. 9) [Note this leaves open the possibility of other leaks.]

10. FBI Deputy Assistant Director (Peter Strzok) texted Page about a WSJ article and they noted that they were not upset about McCabe throwing Justice Department official under the bus. That day the DOJ was noted in an article in the WSJ as criticizing Comey for informing Congress of the Clinton Foundation investigation. (p. 10) [Note how the FBI and DOJ only communicate through leaks…]

11. A meeting was held on October 31st, 2016 where Comey reportedly stated “Need to figure out how to get our folks to understand why leaks hurt our organization”. (p. 11)

12. McCabe stated that he and Comey discussed on October 31st, 2016, the October 30th WSJ leak and says that he told Comey he authorized it. Comey states that he does not recall McCabe telling him that McCabe had authorized the call.

13. McCabe stated that many FBI officials knew he had authorized the October 30th leak to the WSJ.  “However, none of the potential witnesses identified by McCabe (FBI-GC, Comey’s Chief of Staff, The Counterintelligence Assistant Director (“AD-CI”), and McCabe’s then-Chief of Staff ) corroborated this or recalled knowing at the time, or even now, that McCabe had authorized the disclosure.” (pp. 13-14)

14. McCabe refused to sign an inspector’s notes about his statements to the inspector, specifically noting that he [McCabe] did not know who leaked the information in the WSJ October 30th, 2016, report.

15. McCabe stated to an IG employee under oath that he did not know who authorized October 30th WSJ leak and then a couple days later called them back to correct what he said. (pp. 19 and 20)

2. Many of the FBI and DOJ characters in the report appear corrupt, coordinated and conspiring to assist with the cover up of the Clinton Foundation investigation and in leaking information to the press.

3. The report includes little mention of Anthony Weiner’s laptop emails other than to mention that a meeting was scheduled to get a search warrant to request the emails on October 27th, 2016.  The emails were the suspected cause for Comey’s email to Congress on October 28th, 2016, announcing that the Hillary email scandal was being reopened.  However, per text messages between Strzok and Page, the FBI knew about the emails in September 2016 and had sent a team to New York to review the emails at that time.  [The Weiner emails may be what the Democrats are most fearful of being released to the public.]

4. McCabe [and others] clearly broke laws and FBI policies but no trial date is set as of today. However, the IG is drafting a letter to the FBI recommending actions to be taken.

There are numerous contradictions between FBI employees and each other and with DOJ employees. The FISA Court report on FISA abuses stated that James Clapper’s NSA had an institutional “lack of candor”. It is clear from this report that the FBI and DOJ have the same lack of candor.