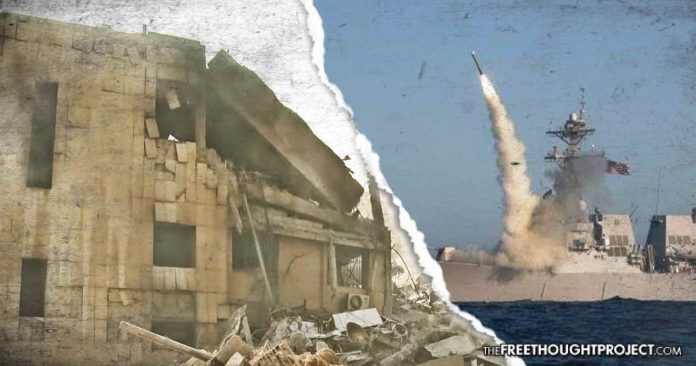 Damascus, Syria – The United States launched around 120 missiles targeting the Syrian government on Friday, and as reports of the damage surface, the evidence is showing that while the U.S. is bragging that the attack hit a chemical weapons facility, it actually destroyed a cancer research center.

The attacked launched by the United States, the United Kingdom and France, has reduced the Pharmaceutical and Chemical Industries Research Institute in Barzeh to rubble, according to a report from the Syrian Arab News Agency, which noted that the facility’s use “centered on preparing the chemical compositions for cancer drugs, and conducting chemical analyses of the materials entering Syria, which are used in pharmaceutical and food industries.”

Scientist Saeed Saeed, head of the Institution for the Development of Pharmaceutical and Chemical Industries, told CCTV+ that while the facility was used by the Organization for the Prohibition of Chemical Weapons in 2013, it is now used as a research center for pharmaceutical products because sanctions from the Western countries that are bombing Syria have resulted in a shortage of medication.

The shortage of medicine will be even greater now that the U.S. has aided in destroying the research center—but the Pentagon is proudly claiming that it destroyed a facility dedicated to producing chemical weapons.

The U.S. military claimed that the facility was targeted because it was used by “the Syrian government agency responsible for developing and producing non-conventional weapons and the means to deliver them.” At least 76 missiles were launched in the direction of the research center, and the U.S. is boasting that it has set back Syrian chemical weapons capabilities “for years.”

However, international weapons inspectors declared that the Syrian government has surrendered the last of its chemical weapons in June 2014, and each time there have been reports of a chemical attack in Syria, President Bashar al-Assad has vehemently denied responsibility.

Instead of waiting for a legitimate investigation, the United States has attacked the Syrian government when reports of a chemical attack are circulated by the media while refusing to acknowledge numerous documented chemical attacks on Syrian civilians by both the U.S. and the rebel groups it funds.

While there is speculation as to whether a chemical attack did happen in Douma, Syria, and how it was carried out, there are also a number of holes in the United States Military’s claim that the missiles they launched hit a facility where the Syrian government was actively creating chemical weapons.

One of the largest questions in response to that claim was that if the U.S. really had hit a facility where chemical weapons were being produced, wouldn’t that have contaminated the air and the water system, and arguably have killed more civilians than the initial attack the U.S. claims the Syrian government carried out?

As Saeed stood outside of the rubble from what used to be the cancer research facility, he argued that if it had been filled with chemical weapons, he and his colleagues would have been forced to wear gas masks.