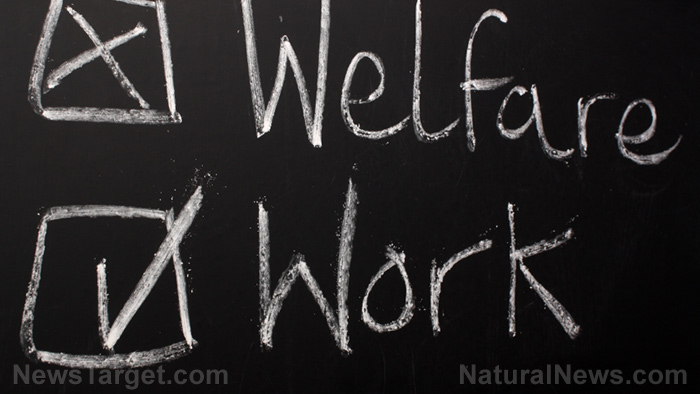 (Natural News) In the mid-1990s, the Republican-led Congress and President Bill Clinton worked together to pass a significant welfare reform program that was dubbed “Workfare.”

Known formally as the “Personal Responsibility and Work Opportunity Act,” it essentially required anyone receiving welfare benefits to find work and take a job in order to keep getting assistance.

Not only that, the assistance was time-limited; the goal of the law was to move people offwelfare completely and into the workforce.

“The law contains strong work requirements, a performance bonus to reward states for moving welfare recipients into jobs, state maintenance of effort requirements, comprehensive child support enforcement, and supports for families moving from welfare to work — including increased funding for child care and guaranteed medical coverage,” said a description by the Department of Health and Human Services, which oversaw its requirements.

Left-wing Democrats and their media mouthpieces hated the law and nitpicked it incessantly because they view dependency on government as an electoral strength.

But by any measure of Workfare’s true intent — transforming formerly reliant Americansinto citizens independent of government — the law was a success. As the Heritage Foundation noted in 2012, Workfare reduced welfare caseloads by half as employment rates among welfare recipients “soared.”

The Left attacked Rector as being wrong and intentionally so. He wasn’t; after all, he helped craft the 1996 Workfare legislation.

As a result of Obama’s change in the statute, welfare rolls spiked upward again, which was totally predictable. From 2009-2012, CNS News reported, federal and state welfare assistance had grown by nearly 20 percent, approaching $1 trillion annually for all 79 means-tested programs. (Related: Disgusting: Welfare recipients may soon shop online for clothes using your tax dollars.)

By 2016, there was a 32-percent jump in welfare recipients, Breitbart News reported.

Slowly but surely, after President Donald J. Trump took office, a number of states began to reimpose work requirements. Fox News noted on Independence Day in 2017 that in states that had done so, welfare rolls fell dramatically, between 50-90 percent, saving states and the federal government tens of billions of dollars.

As reported by The Western Journal:

“The federal government’s role is to clear paths to self-sufficiency, reserving public assistance programs for those who are truly in need,” says the order. “The federal government should do everything within its authority to empower individuals by providing opportunities for work, including by investing in federal programs that are effective at moving people into the workforce and out of poverty.”

Out of earshot of the daily noise of special counsel probes, angry protests, and political shenanigans, Trump is quietly, steadily keeping his pledge to “Make America Great Again.”