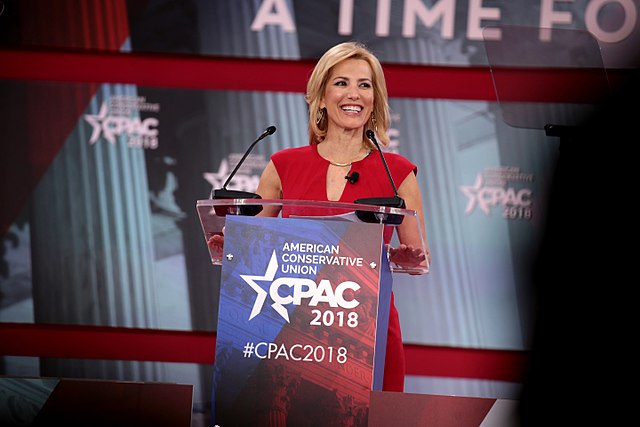 Parkland student David Hogg’s advertiser boycott targeting Fox News host Laura Ingraham is turning out to be a gift from the gods.

Ingraham’s ratings have surged massively in the key demo and hit new all-time highs overall upon her returning to the air last week.

Ingraham went on vacation on March 3o after advertisers began bailing on her show because she mocked Parkland shooting survivor David Hogg for “whining” about not getting into colleges. But in her return to the airwaves last week, she was up 25 percent in total viewers and 36 percent in the key 25-54 demo, compared to her averages for the first three months of the year.

She averaged 3,099,000 total viewers and 685,000 in the 25-54 demo. The numbers included a bump in viewership for Friday’s coverage of the airstrikes on Syria, which also improved ratings for her competition at MSNBC and CNN. Ingraham beat both networks in total viewers and the demo last week.

After returning, she bravely criticized the Syria strikes and mocked Sebastian Gorka for lashing out at her other guest for opposing them.

Last week, Ace Hardware reversed its decision to stop advertising on her show, exactly one week after it announced it would part ways with the Fox News host.

Contrast this story with that of Starcucks, also known as StarSchmucks.

Executive Chairman and former CEO Howard Schultz did everything in his power to virtue signal about how wonderfully progressive his company was, yet now he’s being hoisted by his own petard.

The new CEO is falling all over himself apologizing because cops asked a few loiterers to leave:

FULL INTERVIEW: "I personally apologize…" Starbucks CEO Kevin Johnson one-on-one with @RobinRoberts in his first interview after two black men were handcuffed at a Philadelphia store.

Meet Brandon Ward. He was @Starbucks – about to make a purchase – and needed to use the restroom.

They denied him the code.

He then finds a white man, Weston, who came out of the restroom.

He had not made a purchase but they gave HIM the code.

The social justice brigade is piling on:

From @Toure: Black Coffee and White Fear Made a Toxic Mix at That Philadelphia Starbucks https://t.co/MtuCYz0pfA via @thedailybeast

Protests begin inside Starbucks where two black men were arrested while waiting for a friend last week. pic.twitter.com/M87rukwz8O

Whereas right-wingers are sick and tired of all this social justice garbage, leftists are intent on tearing down everything around them. The companies who cave to these boycotts and give into these social justice mobs are going to get the social justice they crave given to them good and hard.

In the future you are no longer allowed to order your coffee “Black” at Starbucks but rather you must stipulate “Without Dairy.”