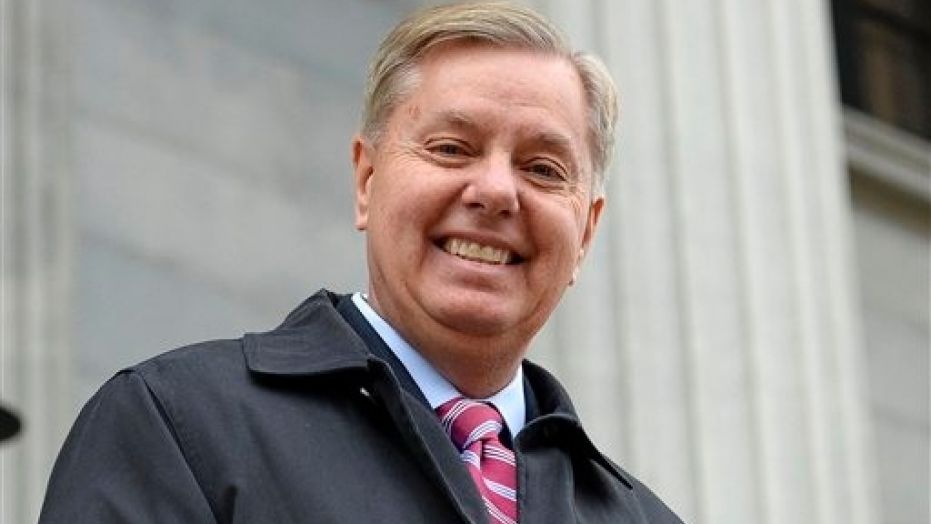 Two days ago, on April 16, 2018, Graham criticized the Trump Administration’s April 14 firing of 105 missiles at Syrian government targets over an alleged, wholly unverified chemical attack in Douma, a suburb of Damascas (more on this latest Syrian crisis later, in a post to come).

Graham criticized President Trump for not doing enough, calling the bombing a “major step backwards” because the missile-strikes had failed to weaken Syrian President Bashar al-Assad and his government.

As an example, in a speech at a TEA Party event in Greenville, SC on April 17, 2010, William Gheen, President of Americans for Legal Immigration (ALIPAC), said:

“US Senator Lindsey Graham is gay and while many people in South Carolina and Washington DC know that, the general public and Graham’s constituents do not. I personally do not care about Graham’s private life, but in this situation his desire to keep this a secret may explain why he is doing a lot of political dirty work for others who have the power to reveal his secrets. Senator Graham needs to come out of the closet inside that log cabin so the public can rest assured he is not being manipulated with his secret.”

Now Wayne Madsen, who calls himself America’s foremost “independent” journalist, publicly declares Israel has the goods on Graham and is using his closeted homosexuality to blackmail him.

“Graham is a well-known neoconservative war hawk. He was hoping obviously that John Bolton, who’s his fellow traveler in neoconservative circles and the new national security adviser, that we would see a more sustained military attack against Syria.

What Lindsey Graham wanted to see of course was a US attack on Syrian airfields, infrastructure, the presidential palace, and on the nationals of Russia or Iran or Lebanon, and members of Hezbollah killed. That’s just fine for Lindsey Graham.

Lindsey Graham does not care about putting the world on the brink of World War 3. And I think the reason for that is the fact that Lindsey Graham, who comes from a very conservative state, South Carolina, the Israelis have significant blackmail information on Mr. Graham having to do with his homosexual lifestyle.”

The identification of Israel’s interests as America’s interests is best illustrated by an Israeli stamp (below) that was issued upon the inauguration of the Zionist Organization of America House in Tel Aviv.

Founded in 1897, the Zionist Organization of America (ZOA) is the first official Zionist organization in the United States, and the primary representative of American Jews to the World Zionist Organization. ZOA was instrumental in mobilizing the support of the U.S. government, Congress, and the American public for the creation of Israel in 1948. Following the founding of Israel, and to unify Jewish representation with the executive branch of US government, the ZOA became a charter member of the Conference of Presidents of Major American Jewish Organizations.