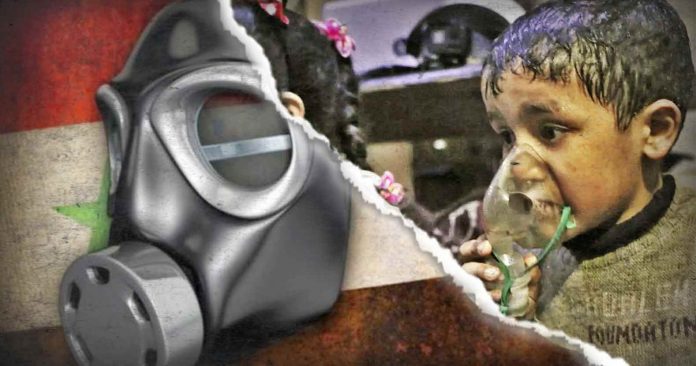 Douma, Syria – Critically acclaimed war reporter Robert Fisk published a stunning account of the alleged chemical attack in the Damascus suburb of Douma on April 7, which included testimony from a doctor who works at the hospital featured in the widely circulated video purported to be the aftermath of a Syrian government chemical strike.

This is the story of a town called Douma, a ravaged, stinking place of smashed apartment blocks–and of an underground clinic whose images of suffering allowed three of the Western world’s most powerful nations to bomb Syria last week. There’s even a friendly doctor in a green coat who, when I track him down in the very same clinic, cheerfully tells me that the “gas” videotape which horrified the world– despite all the doubters–is perfectly genuine.

War stories, however, have a habit of growing darker. For the same 58-year old senior Syrian doctor then adds something profoundly uncomfortable: the patients, he says, were overcome not by gas but by oxygen starvation in the rubbish-filled tunnels and basements in which they lived, on a night of wind and heavy shelling that stirred up a dust storm.

Contrary to the narrative faithfully reported by western mass media, the bombshell report from Fisk—who became famous for being among the few reporters in history to conduct face-to-face interviews with Osama bin Laden, which he did on three occasions between 1993 and 1997—found, after interviewing numerous local Douma residents, there was no evidence to substantiate the reported chemical attack as claimed by Saudi-sponsored jihadist group Jaish al-Islam (Army of Islam).

Fisk reports that the Syrian doctor, Dr Assim Rahaibani, who works at the hospital told him:

“I was with my family in the basement of my home three hundred metres from here on the night but all the doctors know what happened. There was a lot of shelling [by government forces] and aircraft were always over Douma at night–but on this night, there was wind and huge dust clouds began to come into the basements and cellars where people lived. People began to arrive here suffering from hypoxia, oxygen loss. Then someone at the door, a ‘White Helmet,’ shouted ‘Gas!’ and a panic began.People started throwing water over each other. Yes, the video was filmed here, it is genuine, but what you see are people suffering from hypoxia–not gas poisoning.”

Witnesses told Fisk that the infamous White Helmets, officially known as Syria Civil Defence, actually operate as a civil defense for the “terrorist” rebel forces. The White Helmets are largely funded by the U.S. and UK governments and were founded in 2013 by James Le Mesurier, a former British military intelligence officer, and private security specialist.

Providing perhaps additional evidence that the White Helmets operate not a civil defense, but a defense on behalf of the Islamist terrorists, Fisk reports:

The White Helmets–the medical first responders already legendary in the West but with some interesting corners to their own story–played a familiar role during the battles. They are partly funded by the Foreign Office and most of the local offices were staffed by Douma men. I found their wrecked offices not far from Dr Rahaibani’s clinic. A gas mask had been left outside a food container with one eye-piece pierced and a pile of dirty military camouflage uniforms lay inside one room. Planted, I asked myself? I doubt it. The place was heaped with capsules, broken medical equipment and files, bedding and mattresses.

Of course we must hear their side of the story, but it will not happen here: a woman told us that every member of the White Helmets in Douma abandoned their main headquarters and chose to take the government-organised and Russian-protected buses to the rebel province of Idlib with the armed groups when the final truce was agreed.

See how that works—the terrorists leave the city and White Helmets are gone. So, when people perpetuate the lie that the White Helmets are Syrian civil defense, be sure to correct them and note that they are the civil defense for the Islamist jihadi forces that are attempting to overthrow the government and not the Syrian people.

In regards to purported “moderate rebels” you hear about in the western press, the Syrians that Fisk interviewed had a vastly different outlook on who they were:

Before we go any further, readers should be aware that this is not the only story in Douma. There are the many people I talked to amid the ruins of the town who said they had “never believed in” gas stories – which were usually put about, they claimed, by the armed Islamist groups. These particular jihadis survived under a blizzard of shellfire by living in other’s people’s homes and in vast, wide tunnels with underground roads carved through the living rock by prisoners with pick-axes on three levels beneath the town. I walked through three of them yesterday, vast corridors of living rock which still contained Russian–yes, Russian–rockets and burned-out cars.

So the story of Douma is thus not just a story of gas–or no gas, as the case may be. It’s about thousands of people who did not opt for evacuation from Douma on buses that left last week, alongside the gunmen with whom they had to live like troglodytes for months in order to survive. I walked across this town quite freely yesterday without soldier, policeman or minder to haunt my footsteps, just two Syrian friends, a camera and a notebook. I sometimes had to clamber across 20-foot-high ramparts, up and down almost sheer walls of earth. Happy to see foreigners among them, happier still that the siege is finally over, they are mostly smiling; those whose faces you can see, of course, because a surprising number of Douma’s women wear full-length black hijab.

With a policy platform of destroying ISIS and fighting terrorism, the Trump Administration has seemingly chosen the all too familiar path of the U.S. covertly aligning itself with insurgent groups meant to operate as a proxy army to foment regime change that Washington deems of significant geostrategic importance.

While most Americans understand that Saudi Arabia is the most prolific state sponsor of terrorism in the world, the close relationship being forged between Trump and Mohammed Bin Salman leads one to believe that the perceived financial incentives (Aramaco IPO) of strategic partnering with the Kingdom seems to outweigh Trump’s voiced concerns over Saudi involvement in 9/11 and their funding of global terrorism.

What is irrefutable is that the Saudis have chosen to supply massive amounts of arms and funding to numerous Islamist jihadi groups active in trying to overthrow the Assad government, as evidenced by internal diplomatic cable, released by WikiLeaks in 2015, revealing the Saudi government was set on Assad’s violent ouster “by all means available.”

Noting the rigorous independence of his reporting, Fisk wrote that he came to Douma as part of a convoy of journalists escorted by the Syrian government, but according to Fisk, “once a boring general had announced outside a wrecked council house ‘I have no information’… I just walked away.”

While Fisk is sure to come under attack by critics, the New York Times has previously referred to him as “probably the most famous foreign correspondent in Britain” while The Guardian has called him “one of the most famous journalists in the world.”

Additionally, a report from Douma, Syria, by One America’s Pearson Sharp, confirmed Fisk’s reporting, noting that residents there deny an attack happened and instead claim it was staged by rebel forces in an effort to precipitate a response from western forces.

Sharp said that he interviewed between 30 to 40 residents of Douma, and in a series of social media posts, he wrote:

I just spoke with a Syrian woman who lives in Douma. I asked her about the attack there, and she laughed, and said no! There was no chemical attack or any other kind of attack.

She told me the area in question was in her neighborhood, and that if an attack had happened, she and her family would be dead.

I asked her what did happen, and she said the rebel terrorists lied, created the event from nothing, and used it as a cover to convince America and Europe to attack Assad’s forces.

Not making this up. Just reporting what people who actually live here are telling me.

Sharp emphasized that his reporting was not scripted or staged, but with actual local residents of Douma. He said that not one person told him that no chemical attack had taken place, but residents confirmed that they believe the alleged attack was staged by “terrorists rebels” so they could escape the oncoming Syrian army.

You can watch Sharp’s full report from Douma below: