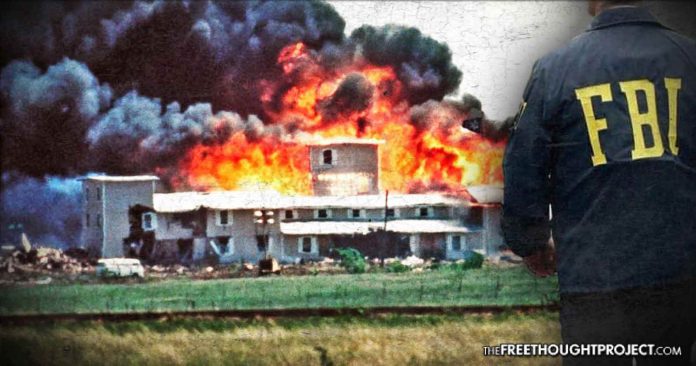 When reports claimed that a chemical attack killed 70 civilians in Syria earlier this month, the Trump administration was quick to place the blame on the Syrian government—despite having no evidence—and they claimed that the horror of such an atrocity deserved retaliation in the form of targeted airstrikes.

While the United States military maintained that the 120 missiles launched in the attack destroyed a facility that was used to produce chemical weapons, witnesses on the ground in Douma, Syria, claimed that the airstrikes actually destroyed a cancer research facility.

U.S. intelligence officials have since admitted that the attack was carried out despite the fact that the United States had no proof that the Syrian government had carried out a sarin gas attack. Instead, the U.S. acted before an investigation could be conducted, and as is usually the case with reported gas attacks in Syria, proof has yet to be found to show that President Bashar al-Assad was responsible.

However, on April 19, 1993, there was a government that used chemical weapons on its own people, and nearly 80 men, women, and children died as a result. But the attack was not carried out by the Syrian government and it did not happen in the Middle East. It took place in Waco, Texas, and it was perpetrated by the United States government.

It all started as the government began looking for ways to obtain a warrant to search the 77-acre plot occupied by a group called the Branch Davidians when they heard rumors that the mysterious cult was stockpiling weapons and modifying them with illegal parts in preparation for the end of the world.

Branch Davidian leader David Koresh was accused of having multiple underage wives, sexually abusing the young daughters of his members, and ultimately holding cult members against their will. But an investigation conducted by Child Protective Services in 1992 concluded that no one was being held against their will and there were no signs of child abuse.

The case against the Branch Davidians continued to grow, and as the Bureau of Alcohol, Tobacco, Firearms, and Explosives (ATF) looked for more evidence against them, Koresh was also accused of running a meth lab on the property. Although no evidence of this was ever found, it served as a legal pretext for ATF agents to receive military training, in order to initiate a raid on the property.

ATF agents attempted to serve a search warrant at the property on Feb. 28, 1993, and they were met with gunfire from the Branch Davidians. They returned fire, and four ATF agents and six Davidians were killed as a result. After the shootout, the FBI joined in and the agencies launched a standoff for the next 51 days.

During the siege, federal agents cut off water and electricity to the compound, and in their attempt to get Koresh to surrender, the Houston Chronicle reported that the agents tortured the remaining members by “using tanks to crush vehicles in front of the compound, playing loud music and flooding the area with bright lights at night to increase pressure on the Davidians.”

Despite weeks of efforts to get the Davidians to surrender, the government learned that the group was, indeed, prepared for the apocalypse. The Clinton Administration decided that the siege was taking too long, and Attorney General Janet Reno authorized the use of CS gas, even though it was known that the Davidians did not have gas masks for the two dozen children who were still inside the compound.

Early on the morning of April 19, federal agents brought in heavy equipment to break down the walls of the building and they spent hours filling it with a dangerous mix of CS gas and methyl chloride that has been shown to be potentially flammable.

When the compound engulfed in flames, killing 76 men, women and children, who were trapped inside, the government insisted that the fire was set by the Branch Davidians as a way to commit suicide. However, in 1999, the FBI admitted its agents had fired pyrotechnic tear gas grenades at the Davidian compound, which could have sparked a fire.

As The Free Thought Project has reported, researchers investigating the incident “concluded federal agents were observed shooting from the compound’s grounds into the building already set ablaze by fire. While the official government narrative is those individuals committed suicide, the researchers were able to demonstrate they were likely killed by automatic weapons fired by federal agents, possibly killed as they were attempting to flee their burning compound.”

Following the massacre, there are also a number of glaring problems associated with attempts to investigate the events surrounding it. According to reports, the corpses of the victims liquefied weeks after they were autopsied, and the door to Mount Carmel, which Davidians believed would show that the ATF fired first, went missing.

The Waco Siege is just one example of the overwhelming hypocrisy exerted by the U.S. government regarding the use of chemical weapons on civilians.

As The Hill noted, the horrific massacre occurred three months after the U.S. signed a treaty promising not to use chemical weapons on enemy soldiers, which just happened to leave a loophole that would let the U.S. torture its own citizens:

“Shortly before the Waco showdown, U.S. government officials signed an international Chemical Weapons Convention treaty pledging never to use nerve agents, mustard gas, and other compounds, including tear gas against enemy soldiers. But the treaty contained a loophole permitting governments to gas their own people. On April 19, 1993, the FBI pumped CS gas and methyl chloride, a potentially lethal, flammable combination, into the Davidians’ residence for six hours, disregarding explicit warnings that CS gas should not be used indoors.”