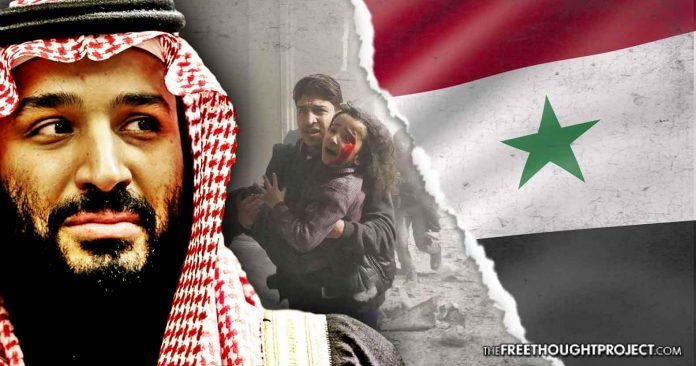 Washington, D.C. – A revealing report by the Foreign Policy Journal from 2016 lays the groundwork for explaining many of the geopolitical manifestations we are currently seeing at play between the triumvirate of the United States, United Kingdom and France, and Russia—and how it relates directly to the Saudi role in the ongoing Syria regime change operation.

An internal cable from within the Saudi Arabian government, released by WikiLeaks in the summer of 2015 as part of “The Saudi Cables” explained that the Kingdom feared Russian intervention and Syrian retaliation, but was set on Assad’s violent ouster “by all means available,” even if U.S. support waivers for “lack of desire.” Furthermore, Saudi Arabia miscalculated that the “Russian position” of preserving the Assad government “will not persist in force.”

Below is an excerpt of the Saudi cable:

“The fact must be stressed that in the case where the Syrian regime is able to pass through its current crisis in any shape or form, the primary goal that it will pursue is taking revenge on the countries that stood against it, with the Kingdom and some of the countries of the Gulf coming at the top of the list. If we take into account the extent of this regime’s brutality and viciousness and its lack of hesitancy to resort to any means to realize its aims, then the situation will reach a high degree of danger for the Kingdom, which must seek by all means available and all possible ways to overthrow the current regime in Syria. As regards the international position, it is clear that there is a lack of ‘desire’ and not a lack of ‘capability’ on the part of Western countries, chief among them the United States, to take firm steps…”

By all measures, the Russian military’s intervention in Syria has been a resounding success for the Assad government and staved off the forces set loose upon the Syrian government by Saudi Arabia and its numerous terror proxies—one of which is Jaysh al-Islam—the Islamist rebel group that was holding Douma when the alleged chemical attack blamed on the Assad government took place.

Without question, the Syrian government, while not in control of all the physical territory of Syria, has essentially won the war—although the United States and Kurd proxies hold vast swaths of land that hold oil, gas and water resources vital to the rebuilding of a contiguous Syrian state.

So let’s rewind to November of 2017. Crown Prince Mohammed bin Salman, widely known as MBS, ordered the mass arrest and detention at Riyadh’s Ritz-Carlton of more than 300 Saudi princes and business leaders. The move was widely touted as a way to recover billions in lost revenue—but largely served as a means of consolidating power due to his recent unexpected succession to the throne. Although the Saudi government claimed the accusations of brutality were “absolutely untrue,” shares in several Saudi-owned enterprises plummeted.

To bolster his legitimacy, MBS undertook a major “charm offensive” in an attempt to prime the U.S. market for the upcoming initial public offering (IPO) of Saudi state oil company Aramco, which experts predict will have a valuation in the range of $1 trillion to $2 trillion. The sale of a 5 percent stake in the company could take place at the end of 2018 or early 2019, depending on market conditions, Prince Mohammed told Reuters in an interview.

A leaked 36-page document copy of MBS’ itinerary, revealed by The Independent in an exclusive report, detailed the list of power-elite the Saudi leader has met or is expected to meet with:

He is also meeting past luminaries such as Barack Obama, John Kerry, Gen David Petraeus and Condoleezza Rice, as well as paying a visit to George W Bush’s Texas ranch.

Other notable meets outside of politics include Bill Gates, Elon Musk, Peter Thiel, Tim Cook of Apple and the CEOs of Microsoft, Boeing, Amazon, Uber, the Walt Disney Company and Lockheed Martin.

Which brings us to Craig Murray, a former UK Ambassador, who lays out an interesting timeline to consider. Note that the aforementioned U.S. power tour by MBS began on March 19:

March 13 2018 Valeri Gerasimov, Russian Chief of General Staff, states that Russia has intelligence a fake chemical attack is planned against civilians in Syria as a pretext for US bombing of Damascus, and that Russia will respond militarily.

Murray connects the Skripa poisoning to Syria and posits that rather than Moscow attacking the Skripals, as asserted by the British government, the event was actually a false flag meant to be blamed on Russia, as meant of further ostracizing them on the international stage.

The former British diplomat said, “from the start, I pointed to the conflict in Syria as a likely motive. That puts Saudi Arabia (and its client jihadists), Saudi Arabia’s close ally Israel, the UK and the USA all in the frame in having a powerful motive in inculcating anti-Russian sentiment prior to planned conflict with Russia in Syria. Any of them could have attacked the Skripals.”

“Today, Theresa May is claiming—astonishingly—that the UK attack on Syria is ‘to deter chemical weapons attacks in Syria and the UK’. I don’t think the motive for a Skripal false flag could be more starkly demonstrated,” Murray added.

Additionally, Russia has directly accused the UK and White Helmets group of engaging in a false flag operation in Douma, claiming they have “irrefutable proof” of the collusion meant to frame the Syrian government for the attack. The British government denies these claims and calls them Russian propaganda.

Without question, the most vociferous advocates of military action against the Syrian government—outside of Saudi Arabia and Israel—are as Murray calls them “the Blairites in the UK and the Clinton Democrats in the USA,” noting that the “self-described ‘centrists’ are actually the unhinged extremists in today’s politics.

Weeks prior to the alleged chemical attack in Douma, Russia warned that they had intelligence that indicated rebel groups were planning to engage in a plot to frame the Syrian government for a chemical weapons attack.

Murray and many other experts are concerned that the alliance to topple the Assad government “will not stop but continue to push, testing how far they can go in weakening Syrian government forces to promote their jihadist allies on the ground before they spark a real Russian reaction.”

The risk of miscalculation could potentially result in a drastic escalation and turn Syria into the roots of a regional or global conflict if Russian military personnel or assets are targeted or hit by western attacks. With Russia having given numerous warnings regarding retaliatory measures, this type of scenario is not out of the question.

Why are the governments of the United States and the UK acting as lapdogs for the Saudi Monarchy’s ongoing regime change operation in Syria when there is a distinct possibility of it leading to direct confrontation between the U.S. and Russia? The trillion dollar IPO of Aramco most likely plays a large role in this power dynamic, as well as geopolitical pipeline politics.

One thing is clear, the real hidden hand working non-stop at regime change in Syria has always been the Kingdom of Saudi Arabia, as evidenced by the internal cable released by WikiLeaks. Saudi Arabia has financed Islamist jihadis in Syria and provided them with arms throughout the conflict. While the security services of the U.S., UK, and France have played a pivotal role, and worked in concert with the Saudi initiative, make no mistake that the MBS and the Saudi government are the driving force behind the ongoing regime change operation.