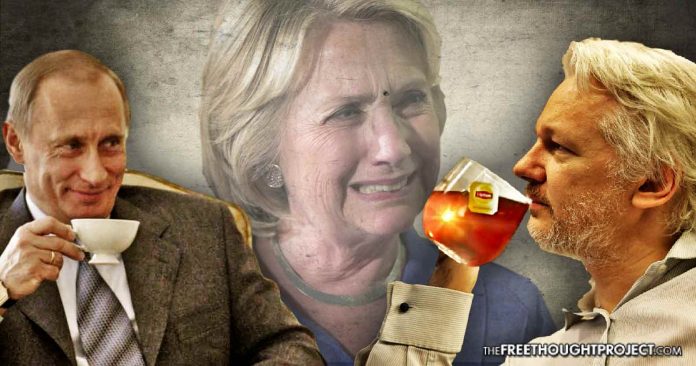 Washington, DC — (ZH) The Washington Post reports that The Democratic National Committee filed a multimillion-dollar lawsuit Friday against the Russian government, the Trump campaign and the WikiLeaks organization alleging a far-reaching conspiracy to disrupt the 2016 campaign and tilt the election to Donald Trump.

The lawsuit alleges that in addition to the Russian Federation, the General Staff of the Armed Forces of the Russian Federation, Wikileaks and Guccifer 2.0, top Trump campaign officials, including Donald Trump Jr, Roger Stone, Jared Kushner, Paul Manafort and pretty much everyone else who has been mentioned in the same paragraph as Trump….

… conspired with the Russian government and its military spy agency to hurt Democratic presidential nominee Hillary Clinton and help Trump by hacking the computer networks of the Democratic Party and disseminating stolen material found there.

“During the 2016 presidential campaign, Russia launched an all-out assault on our democracy, and it found a willing and active partner in Donald Trump’s campaign,”

“This constituted an act of unprecedented treachery: the campaign of a nominee for President of the United Statesin league with a hostile foreign power to bolster its own chance to win the presidency,”

The lawsuit asserts that the Russian hacking campaign – combined with Trump associates’ contacts with Russia and the campaign’s public cheerleading of the hacks – amounted to an illegal conspiracy to interfere in the election that caused serious damage to the Democratic Party.

As a reminder, the president has repeatedly rejected any collusion or improper activity by his campaign. This week, he referred again in a tweet to the “phony Russia investigation where, by the way, there was NO COLLUSION (except by the Dems).”

The Washington Post  notes that the lawsuit echoes a similar legal tactic that the Democratic Party used during the Watergate scandal.

In 1972, the DNC filed suit against then President Richard Nixon’s reelection committee seeking $1 million in damages for the break-in at Democratic headquarters in the Watergate building.

The suit was denounced at the time by Nixon’s attorney general, John Mitchell, who called it a case of “sheer demagoguery” by the DNC. But the civil action brought by former DNC chair Lawrence F. O’Brien was ultimately successful, yielding a $750,000 settlement from the Nixon campaign that was reached on the day in 1974 that Nixon left office.

The suit filed today seeks millions of dollars in compensation to offset damage it claims the party suffered from the hacks. The DNC argues that the cyberattack undermined its ability to communicate with voters, collect donations and operate effectively as its employees faced personal harassment and, in some cases, death threats.

As a reminder, Senate investigators and prosecutors for special counsel Robert S. Mueller III are still investigating whether Trump associates coordinated with the Russian efforts. Last month, House Intelligence Committee Republicans said they found no evidence that President Trump and his affiliates colluded with Russian officials to sway the election or that the Kremlin sought to help him — a conclusion rejected by the panel’s Democrats.

On Thursday, Bloomberg reported that Deputy AG Rod Rosenstein told Trump that he wasn’t the target of the Mueller probe.

Meanwhile, as Glenn Greenwald summarized it:

18 months after their crushing defeat at the hands of a game show host, the Democrats have still published no public autopsy about why they lost or have collapsed at all levels. They did, though, just file a lawsuit blaming Russia & WL for their loss

18 months after their crushing defeat at the hands of a game show host, the Democrats have still published no public autopsy about why they lost or have collapsed at all levels. They did, though, just file a lawsuit blaming Russia & WL for their loss https://t.co/wdZmTbfW9k

Another hot take makes sense in the context of the the Dems’ growing fundraising gap:

And if someone still thinks this is some elaborate prank, here is the actual lawsuit: