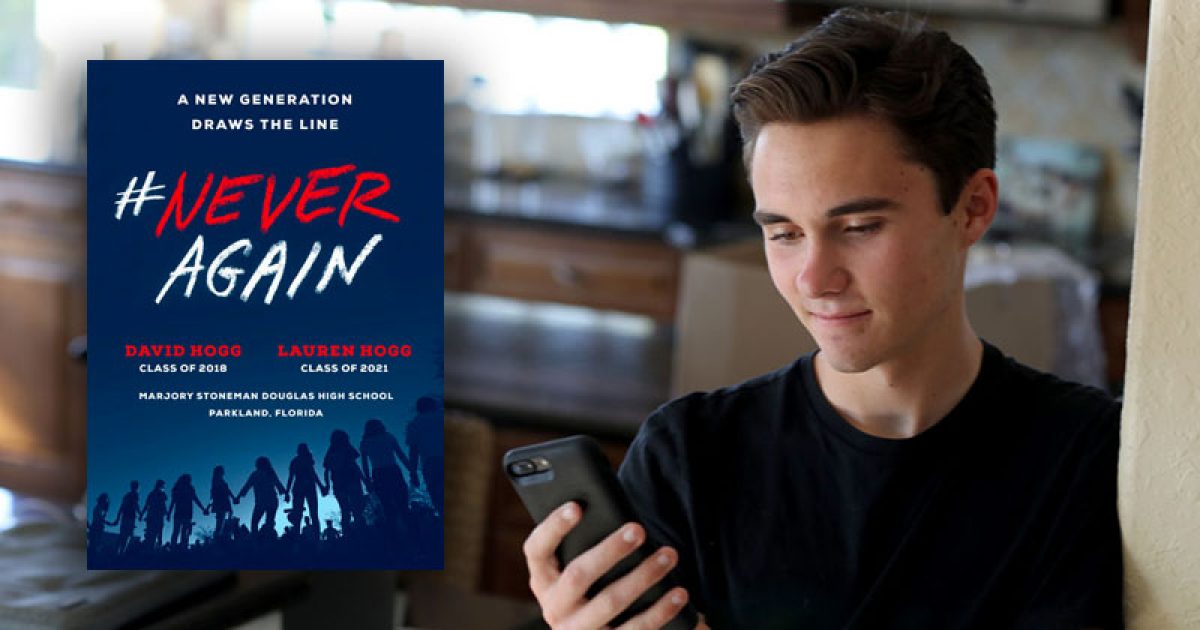 David Hogg has demonstrated once again that he hasn’t learned history as his handlers continue to use him to push an anti-American, unconstitutional agenda against the Second Amendment and law-abiding citizens.  His latest fail comes in the form of a title of a book that he and his sister are “writing,” #Never Again

Yep, you read that right.  For those of you who know your history, you’ll recall that this has been the cry of the Jews for decades to remind people of the holocaust under Nazi Germany.

The irony is that it all occurred due to complete and total gun confiscation, along with any and all other arms.  This has been documented in several works, including Stephen Halbrook’s excellent book Gun Control in the Third Reich

“This book is a manifesto for the movement begun that day, one that has already changed America–with voices of a new generation that are speaking truth to power, and are determined to succeed where their elders have failed,” the description of the book reads.

“Today @lauren_hoggs and I are announcing our book #NeverAgain that tells the story of the foundation of this movement for those we lost. Lauren and I will be using the money made from the book to help heal the community. #NeverAgain out June 5th,” Hogg tweeted.

Today @lauren_hoggs and I are announcing our book #NeverAgain that tells the story of the foundation of this movement for those we lost. Lauren and I will be using the money made from the book to help heal the community. #NeverAgain out June 5th https://t.co/Vh2gWVWNGq

His sister also tweeted about the book.

“Announcing #NeverAgain, a book by @davidhogg111 and I that tells the story of how we turned our grief into action and how we fight and speak out for those who no longer can. All proceeds going to healing Parkland and to prevent gun violence. Coming out June 5th,” Lauren Hogg tweeted.

Announcing #NeverAgain, a book by @davidhogg111 and I that tells the story of how we turned our grief into action and how we fight and speak out for those who no longer can. All proceeds going to healing Parkland and to prevent gun violence. Coming out June 5th.

It’s a bit hypocritical to attack the rights of the people of a community while putting a finger in the eye of people of the community with lies, personal attacks, cowardice and then stealing a title that perfectly identifies why not one person should heed the advice of ignorant useful idiot David Hogg.

Furthermore, about that whole “help heal the community” really means that funds will be donated to Michael Bloomberg’s anti-Second Amendment group, Everytown for Gun Safety.

People were quick to point out how stupid the boy-child is.

Of all the titles you could have chosen, stealing NEVER AGAIN from the Holocaust? Are you kidding? Five million lost souls and their descendants are not pleased. pic.twitter.com/LKMW08gULG

Are you really going to use the name never again? You need to educate yourself on what that term was used for, what it means, and the people it represents.

Is it fair to say you are cheapening the phrase Never Again with this? Remember the Holocaust?

I have soooooo many problems with politicizing the phrase #NeverAgain. It’s a term used to memorialize the Holocaust (and, to a lesser extent, to memorialize the victims of the September 11th attacks). It is deeply gross to use that phrase to push for a divisive political agenda. https://t.co/vr2utXER8h

Then there was this one, which is my personal favorite as I have pointed out that Hogg is the Judas leading his generation down the same road as those who would not bow to Nazi Germany and were marked for extinction.

Feel like pointing out that it appears you and your fellow sheep are appropriating #neveragain from Holocaust victims. You did learn about the Holocaust in school right? Or did you miss it because of walking out?

Even some who support this nonsense called Hogg out on this.

Here’s the thing, while I do think he doesn’t have a clue, the fact is that maybe this will stir some of the lemmings up in his movement to actually crack open a history book and read what happens when you start demanding the unlawful things that Hogg is demanding, along with the Communists in our government.

Take note here:  keeping and bearing arms is not a privilege, it’s a right given by God, and therefore, you can call for repeal of the Second Amendment and infringing on that right all you want to, but it does not strip people of their rights because they are unalienable.  We’ll still hold onto our guns, and one day, we may have to even protect people like David Hogg from their stupid activism when their handlers believe they are no longer of any use.

I think this is just more evidence that Hogg’s 15 minutes of fame are about up.

South Dakota Governor: I Don’t Have The Authority To Lockdown The...