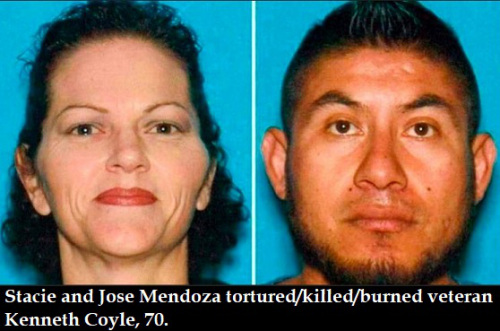 These are the monsters that our government let in, who are protected and shielded by sanctuary cities and states.

In November 2017, MS-13 El Salvadorean gang members lured an unidentified Maryland man to a park on the outskirt of Washington, D.C. They stabbed the man 100 times, decapitated him, cut his heart out, then threw the body into the grave they dug for him.

The Mendozas restrained the elderly man on a bed in his house in the small city of Hanford, near the Naval Air Station. They beat him to get access to his financial information, then strangled him to death. Coyle died of blunt force trauma and suffocation.

Coyle had first met Stacie Mendoza at a Hanford restaurant where she worked as a waitress. As their relationship developed, she started getting access to his bank account and getting money from him.

A few days later the Mendozas and their three children drove Coyle’s body to nearby Madera County, where they burned it while their children watched. Afterwards, the Mendozas returned to Coyle’s house to steal more things and were spotted by property managers, who called police.

Officers tracked Coyle’s cellphone to the Mendozas’ home in Fresno. Police later arrested them at a restaurant near Los Angeles International Airport. Jose Mendoza had a plane ticket to his native El Salvador, as well as Coyle’s credit card. The Mendozas are being held without bail. Their children are in the custody of Child Protective Services.

According to The Telegraph, the MS in MS-13 stands for Mara Salvatrucha, said to be a combination of Mara, meaning gang; Salva, for Salvador; and trucha, which translates roughly into street smarts. The 13 represents the position of M in the alphabet. The gang formed in Los Angeles in the 1980s, comprised of Salvadorean immigrants fleeing their country’s civil war.

MS-13 is believed to be active in 46 states. According to the Trump DOJ, there are currently 10,000 MS-13 members, making it one of the largest criminal enterprises in America.

President Trump has made rounding up and removing gang members a priority of his administration. In July 2017, during a fiery speech on Long Island — the site of several gang murders, Trump called MS-13 “animals” and promised to “destroy” them. He said:

“we’re going to restore safety to our streets and peace to our communities, and we’re going to destroy the vile criminal cartel, MS-13, and many other gangs. But MS-13 is particularly violent. They don’t like shooting people because it’s too quick, it’s too fast. I was reading — one of these animals was caught — in explaining, they like to knife them and cut them, and let them die slowly because that way it’s more painful, and they enjoy watching that much more. These are animals….

For many years, they exploited America’s weak borders and lax immigration enforcement to bring drugs and violence to cities and towns all across America. They’re there right now because of weak political leadership, weak leadership, weak policing, and in many cases because the police weren’t allowed to do their job….