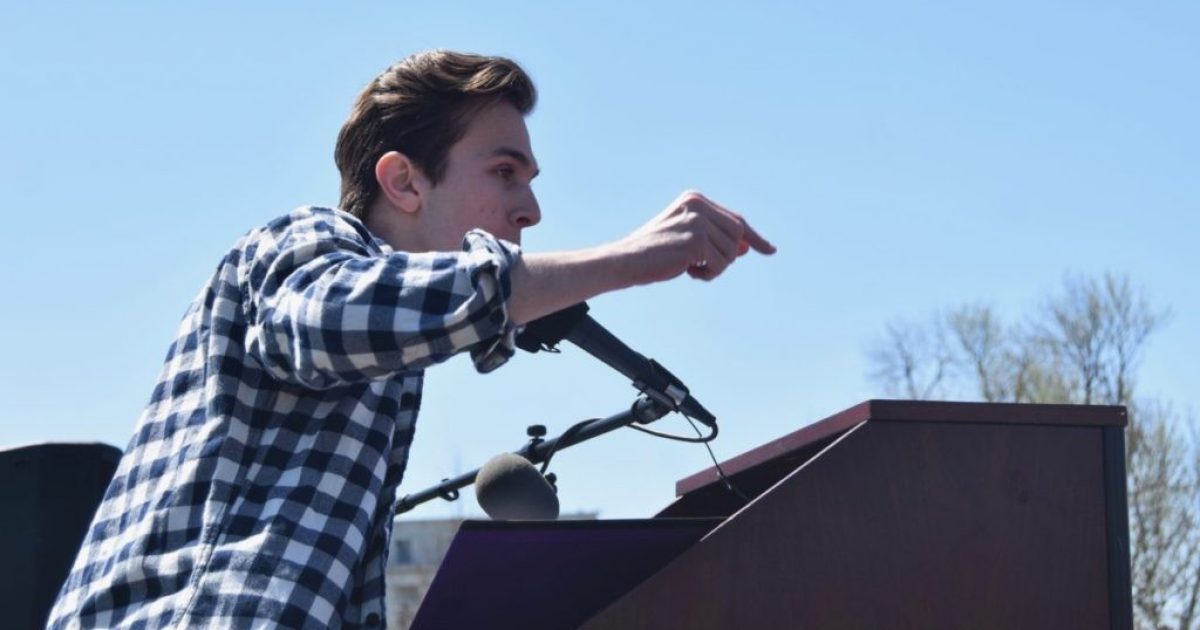 Seriously, this is why these useful idiots should not be listened to when it comes to legislation.  A student who claimed to have followed in the footsteps of discredited foul mouth March For Our Lives leader David Hogg, said not only are rights not absolute, but that he actually thinks graduating high school is a “right.”

Breitbart reports on another DC anti-Second Amendment protest that took place on Friday.

A small group of mostly high school students gathered in front of the White House on Friday as part of the National School Walkout, an anti-gun protest launched by a Connecticut teen following the shooting deaths of 17 people at a Florida high school in February.

Following a moment of silence plus 13 seconds to honor the 13 people shot and killed at Columbine High School on April 20, 1999, the group walked to the Capitol where speakers lashed out at Republicans and the National Rifle Association (NRA).

The organizers from schools in the D.C., Virginia, and Maryland region collected letters demanding gun control from protesters addressed to legislators and registered voters via text.

Of course, like David Hogg and March For Our Lives, there are real shadowy figures behind the scenes funding these people.  This one was funded by Michael Bloomberg’s Everytown for Gun Safety, which gave birth to the Students Demand Action group, who also participated on Friday.

Ian Berlin, 17, is a student at a D.C. high school.  He told Breitbart that he organized the event and spoke at the event about regulations regarding the First Amendment claiming that his group had to purchase permits in order to hold the event.

However, what he doesn’t get is that he had free speech and freedom to assemble without permits.

Yet, he wanted to take that opportunity to talk about the regulations on the freedoms protected in the First Amendment and then apply that to the Second Amendment.

“And so too must we regulate the Second Amendment,” Berlin said. “Just as the freedoms of the First Amendment are subject to rules and regulation so too must be those protected under the Second.”

“No amendment is absolute,” Berlin added. “Your right to a gun does not supersede my right to graduate high school.

Well, now, I think Mr. Berlin has been listening to Chuck Schumer and Chris Cuomo a little too much.

As for the Second Amendment, the same thing applies.  The Constitution is quite clear, “… the right of the people to keep and bear arms shall not be infringed.”

It doesn’t say a little bit, does it?  It doesn’t state there are rules and regulations that can be added to infringe on that right, does it?  Nope, sure doesn’t.

Finally, there is no God-given “right” to graduate high school.  Education is not a right.  It is a privilege.  Some people get one while others do not.  It is encouraged but it does not trump the rights of law-abiding gun owners any more than those killed in mass shootings.

Berlin, who was born after the 1999 Columbine shooting said that politicians had provided “no meaningful action to protect our schools and our communities from this epidemic of gun violence.”

Well, that’s because when it comes to education, the federal government was given no authority to do anything and furthermore they are not given authority to regulate or restrict arms.

“So to the politicians, I say you’ve had 19 years and now you have until November,” Berlin said. “If you don’t act, we will vote you out.”

Now, I don’t know when Berlin turns 18, but I’m guessing there will be a lot of useful idiots like him in November in their little bubbles across our country who will vote like him, but I don’t think they are really in an area that it will have much effect.

I mean just compare a map of the 2016 election and murders by county.

What about this one?

That’s right, the US is number one in gun ownership, but when it comes to murder rates, we aren’t even in the top 100 countries of the world.

That’s because an armed society spends more time stopping evil than contemplating it.

If Berlin were serious about protecting schools, he should be petitioning for the repeal of the gun free zones nonsense since more than 90% of all mass shootings occur in them.