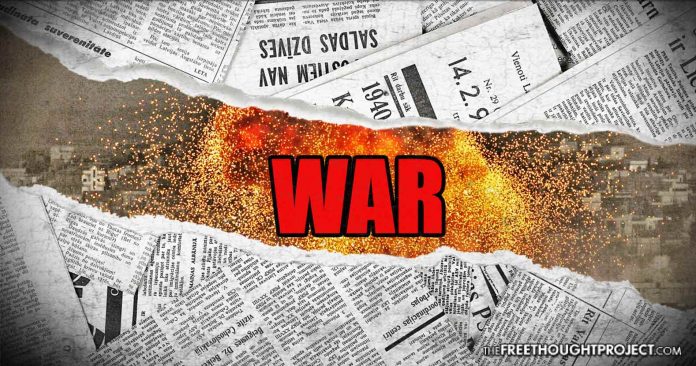 A disturbing trend has been ongoing within the mainstream media when it comes to reporting on United States foreign policy, and while some may argue that the media is typically critical of President Trump, 26 major editorials were published in response to his recent decision to launch airstrikes against Syria, and not a single one criticized the attack.

In fact, that sentiment was shared by the top 100 newspapers in the United States, according to an analysis conducted by Fair.org. Out of those papers, none of the editorials issued in response to an escalation of the war in Syria that could have sparked World War 3, condemned it. While 74 papers issued no response, the editorial teams from 20 papers showed overwhelming support, and six papers neither supported or condemned the attack.

“None of the top 100 newspapers questioned the US’s legal or moral right to bomb Syria, and all accepted US government claims to be neutral arbiters of ‘international law.’ Many editorials hand wrung about a ‘lack of strategy’ or absence of congressional approval, but none so much that they opposed the bombing. Strategy and legal sanction are add-on features—nice but, by all accounts, not essential. The total lack of editorial board dissent is consistent with major papers’ tradition of uniform acceptance of US military action.”

The analysis noted that as the “most influential paper in the country,” the New York Times, “has not opposed a single US war—from the Persian Gulf to Bosnia, to Kosovo to Iraq to Libya to the forever war on ISIS—in the past 30 years.” That trend has stayed in place in 2018, as the Times’ response to the attack showed its newfound support for the Trump Administration.

The New York Times’ Editorial Board claimed it was “reassuring that his military response to a suspected chemical attack that killed dozens of people in the rebel-held Damascus suburb of Douma on April 7 was coordinated with Britain and France,” and applauded Trump’s decision to go after Syria because “preventing chemical weapons was in the ‘vital national security interest of the United States.’”

After months of pushing the claim that the only reason Trump won the 2016 election was that of “Russian election interference,” the Washington Post changed its tune on Trump and acknowledged his increased hostility towards Russia. Leading with the headline, “Trump was right to strike Syria. But the mission is far from accomplished,” the Post’s Editorial Board argued that the strike was a good start, but the U.S. must now be prepared for a response from Russia and Iran.

“Mr. Trump was right to order the strike, and also to focus it on chemical and biological facilities. It is vital that the international prohibition against the use of those horrific agents be upheld; the participation of Britain and France in the operation was important in that respect. At the same time, the president and Mr. Mattis clearly sought to minimize the risk of a direct military confrontation with Russia or Iran. That is prudent, but if Russia takes retaliatory action, including in cyberspace, the United States must be ready to respond.”

An editorial from USA Today claimed that the attack authorized by Trump was “an appropriate way to punish Syrian President Bashar Assad and his military for gassing his own helpless people two days earlier. The nerve agents employed are among the most barbarous and indiscriminate weapons ever devised.”

The Wall Street Journal argued that “Syria’s illegal use of chemical weapons against its own people demanded or at least justified the Western attacks.” The Los Angeles Times went as far as to claim that an alleged chemical attack from the Syrian government is far worse than what the U.S. has done to civilians in Syria:

“Whatever one thinks of the wisdom of Trump’s decision, he is right to see the use of chemical weapons as especially abhorrent. Of course, conventional weapons also cause death and injury, and a child killed by a barrel bomb is just as dead as a child poisoned by sarin or chlorine gas. But for a century, chemical weapons have been viewed by civilized nations as beyond the pale. The descriptions in recent days of Syrian victims gasping, trembling and foaming at the mouth only reinforces that view. If the deployment of such weapons in Syria goes unpunished, other governments and movements might be emboldened to violate that prohibition.”

As Fair.org noted, this is not an uncommon trend, even with the Trump Administration. When the U.S. responded to reports of an alleged chemical attack by the Syrian government with airstrikes in April 2017, only one of the 47 newspapers opposed the airstrikes in their editorials responding to it.

However, the most glaring problem with the mainstream media editorials is not that they supported the airstrikes or opposed them. The most egregious problem with their responses was that the same entities that are supposed to act as the “Fourth Estate” holding the U.S. government accountable, blindly supported reports of a chemical attack that has yet to be verified.

Following the airstrikes targeting the Syrian government, U.S. intelligence officials admitted that they were conducted despite the fact that the United States had no proof that Syria had carried out a sarin gas attack on its own people. In fact, the attack occurred the day before an investigation was set to take place.

The latest example of blatant propaganda from the mainstream media serves as a reminder that the same outlets who helped start the Iraq War by falsely claiming that Saddam Hussein had “Weapons of Mass Destruction” are now pushing the United States towards an escalated war in Syria with unverified claims of a “chemical attack” when the only groups responsible for routinely carrying out chemical attackson Syrian civilians are the U.S. military and the rebel groups they support.