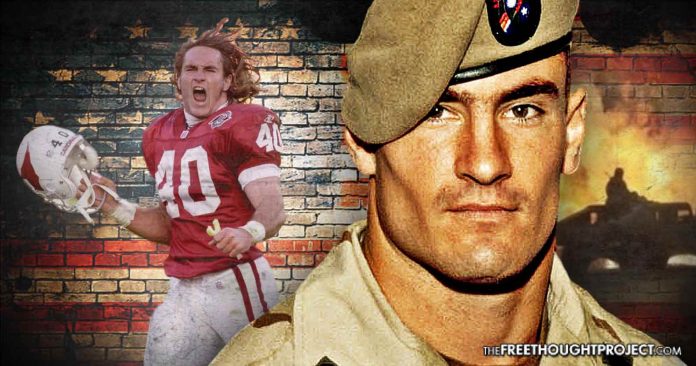 Seventh-round NFL draft pick Pat Tillman wasted no time in setting records for tackles on the football field for the Arizona Cardinals. But in the Spring of 2002, after marrying his childhood sweetheart, Tillman walked away from his multi-million-dollar NFL salary and joined the Army with his brother.

Tillman’s departure from the NFL was widely publicized, as was his death on the battlefield of Afghanistan in 2004. The Pentagon, President George W. Bush, and what seemed like all of America, celebrated Tillman’s heroic death. However, Tillman’s death was not heroic by any means. He was shot and killed by his fellow U.S. soldiers. But once the deception about his story was propagandized, little could be done to undo how the military and the White House had capitalized on his death.

In 2006, The Guardian published a story, titled, “The footballer who became a war hero who became a scandal,” in which author Lawrence Donegan revealed the dastardly actions the government took to rewrite Tillman’s history. Donegan described how all was going well for the Bush Administration’s “War on Terror” when Tillman decided to enlist. He wrote:

“For the Bush administration, recently embarked on its ‘war on terror,’ Tillman’s story was an enormous PR boost. Professional athlete eschews fortune for patriotic duty—not even a White House well versed in spinning self-serving propaganda could have dreamed up such a perfect recruitment story. Tillman finished his basic training in time to be sent to Iraq as part of the US invasion force, before he was sent to Afghanistan in early 2004.”

But all that changed in 2004 when it was learned that the Pentagon’s poster boy had been shot and killed. Instead of telling the truth about Tillman’s death, the decision was made to spin a web of lies and deceit. The heartbreaking reality that he had been killed by his fellow platoon members was, evidently, too dangerous for national security—so much so that an invention of a superhero was birthed. The substitution of stories created a mythical hero out of Tillman on the level of G.I. Joe and was immediately used to further the recruiting efforts of what has now become America’s longest war. Donegan writes:

“The Pentagon immediately announced Tillman had died a heroic death while fighting the Taliban. George W Bush, whose own patriotism never stretched to completing his Texas National Guard duty, spoke of Tillman’s ‘ultimate sacrifice for the war on terror’ and offered to record a tribute to be broadcast during a live NFL game. The soldier was awarded a posthumous Silver Star. On April 30 an Army press release described how Tillman was killed while storming enemy positions.”

Nothing could be further from the truth. It would take a full 10 years before a guilt-ridden ex-soldier broke his silence about what he says happened the night Tillman was killed. Steven Elliott told NPR that he and his squad leader, Sgt. Greg Baker, were the ones who opened fire on Tillman’s position.

The platoon had divided into two groups that went in separate directions. After the first group was ambushed by Afghan fighters, the confusion on the battlefield led Elliott and Baker to open up machine gun fire on Tillman’s location and the former NFL football player, along with 19-year-old Bryan O’Neal, were killed.

“I remember thinking for just a second or two, but what felt like longer—your perception of time in the midst of a firefight can be distorted—that if he’d fired, and without any other information to indicate a friendly position, that I should also fire,” Elliott said, noting that his squad leader fired first, and then he joined in.

He said he was instructed by his superiors not to discuss the friendly fire incident outside of his unit. The military knew it had a PR problem on its hands but Elliott said he was too naive to believe they would spin it into a web of deception.

“I was operating on a certain level of naiveté, I believe,” Elliot said. “[I thought] senior leaders were trying to protect the family, and I had no idea they were being deceived at any point.”

Elliott said he has always wanted to speak with Pat Tillman’s brother, Kevin, about Pat’s death, and he admitted that he struggles with how to approach the family. He told NPR he knows the family feels deceived by its government.

“I always felt like I didn’t know what to say to Kevin,” Elliot said. “It felt like something that you just wanted to avoid, and it grieves me to no end that I didn’t make the effort at that time…I always felt very conflicted about that … I knew that they were very, just hurt beyond belief … [both in] losing Pat but then in the grief and the confusion of the deception.”

What started out as a glorious embark towards battle, ended in a tragic yet completely avoidable death. Just as Americans were told Benghazi was a knee-jerk mob reaction to an anti-Islam film and not a coordinated attack to commemorate 9/11, so were people told Tillman’s death was a heroic one.

Strangely enough, Americans know they were lied to about Benghazi and held several congressional hearings on the failures of leadership in Libya, but with Tillman, he is still celebrated as a hero. The distrust, anger, and outrage at a government who would have Americans believe a lie has been put aside, to honor the man, not his legend.

And honor him they do. Each year, the Pat Tillman foundation hosts a fundraiser in his honor. On the foundation’s web page, his death by his platoon mates is mentioned but missing is any critical comments regarding how the Pentagon and the White House propagandized his death. The Foundation describes his death by writing:

“On the evening of April 22, 2004, Pat’s unit was ambushed as it traveled through the rugged, canyon terrain of eastern Afghanistan. His heroic efforts to provide cover for fellow soldiers as they escaped from the canyon led to his untimely and tragic death via fratricide.”

“Fratricide” is what his death is referred to as, which means “the killing of one’s brother or sister.” The Tillman family has picked up the broken pieces and they are doing their best to move on. The Pat Tillman Foundation focuses on meeting the educational needs of soldiers returning from the battlefield, soldiers they call “Tillman Scholars.” The foundation also acknowledges how Tillman’s fame was highly publicized and describes his legacy:

“While the story of Pat’s death may have been the most publicized in the War on Terror, it is Pat’s life, principles and service that are his true legacy. Pat’s family and friends started the Pat Tillman Foundation to carry forward that legacy by giving military veterans and spouses who embody those principles the educational tools and support to reach their fullest potential as leaders, no matter how they choose to serve.”

And it’s true. Tillman was the epitome of a scholar-athlete. His self-sacrifice and service to his country should be celebrated. But somewhere along the way, someone should be held accountable for the lies perpetrated upon the American people about his death. Instead, not only has no one ever faced consequences for deceiving an entire nation, but deception originating from the highest executive office, its cabinet, and the military continues to this day. Administrations come and go, but the lies remain.

For an even deeper look into Pat Tillman’s life and death, consider “Where Men Win Glory: The Odyssey of Pat Tillman,” written by Jon Krakauer. He noted that much of Tillman’s death still remains a mystery:

“When a soldier is killed in combat, you should put his uniform, his weapon, everything—anything that can be considered forensic evidence should be sent back to the States with the body, so the medical examiners could determine the cause of death. In the case of Tillman, none of that happened.”

Krakauer told NPR that he uncovered more disturbing facts, such as that “Tillman’s uniform and body armor were burned,” and that “his weapon, helmet, even a part of his brain, which fell to the ground after the attack, disappeared.” Krakauer also noted that:

“In July 2007, the Associated Press published an article reporting that the Navy pathologist who performed Tillman’s autopsy testified that the forensic evidence indicated Tillman had been shot three times in the head from a distance of thirty-five feet or less. The article prompted widespread speculation on the Internet and in the mainstream press that he had been deliberately murdered.”

What is crystal clear is that the U.S. military lied, covered up Tillman’s murder, and then used his story for pro-war propaganda. Now, it has been 14 years and the truth about Tillman’s death may never be fully known.