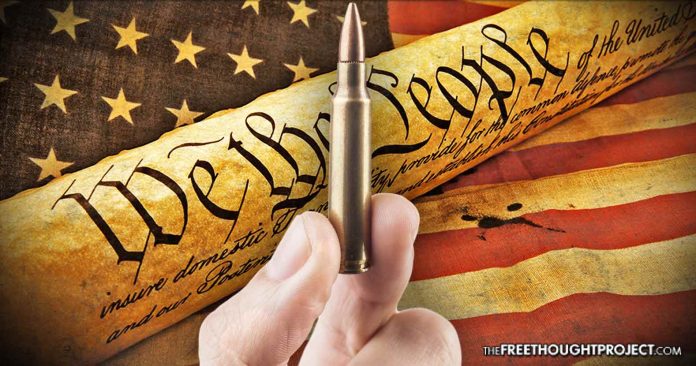 Amid political buzzwords of “sanctuary cities” and “gun bans,” one Illinois county decided to wade into the fray by declaring itself a sanctuary for gun owners. The Effingham County board voted this past week, 8-1, to order its employees not to enforce any laws that would “unconstitutionally restrict the Second Amendment” to the U.S. Constitution.

Effingham County State’s Attorney Bryan Kibler said the measure is meant to act as a warning shot to tell the state legislature that the county does not want unnecessary gun control measures, or for the sale of firearms to be jeopardized. The resolution states:

Board member David Campbell told Fox News that the county “decided it’s time for someone to take a hard stand.” He said the board modeled their resolution on other counties which have adopted similar measures.

The resolution, which Kibler said is “largely symbolic,” was drafted by the board as a response to what it perceives as an attack on the Second Amendment by the State of Illinois and its General Assembly.

“So we thought … why don’t we just make this a sanctuary county like they would for undocumented immigrants? So we did flip the script on it,” Kibler told Fox and Friends, noting that the goal of the resolution is to make it known “to the Illinois general assembly that if they keep on this path of stripping away Second Amendment rights [from gun owners] there’s going to be blowback from Southern Illinois.”

Ever since the resolution passed inEffingham, Kibler said the county has had numerous requests for a draft of the resolution to be passed in other counties in the state. The attorney pointed to bills being considered by the Illinois General Assembly that would restrict the purchase of ammunition to those aged 21 and older as proof that the state is slowly chipping away at individual freedoms.

Kibler said that when the county chose to use the word “sanctuary” in their resolution they received the attention they were seeking. “The Chicago legislation comes up with new… proposals every year which take away our Second Amendment rights,” he said. “So we can send a kid off to war…when he comes home…it’s going to be illegal for him to buy a gun with more than 10 rounds in it.”

Effingham County’s “sanctuary” resolution echoes Iroquois County’s similar resolution adopted in March, decrying the consideration of numerous gun control bills inside the Illinois General Assembly. In a statement, the Iroquois County said the current gun control measures being considered by the state legislature will infringe on their citizens’ rights to be able to defend themselves, engage in recreational hunting and shooting, and it will make instant felons out of any citizen under 21 who fails to surrender their weapons under the new proposed laws.

Similarly, Iroquois also denounced the state General Assembly’s gun control plans, saying they would effectively ban all private and club owned gun ranges and make it nearly impossible for individuals who work late at night and in dangerous jobs to wear body armor for protection, which would conceivably include motorcyclists who wear body armor for personal protection while cycling.

The resolution in Effingham County comes just weeks after Deerfield, Illinois, voted to ban nearly all modern weapons. While Deerfield’s ban is not symbolic, Effingham County’s resolution really does not have any teeth to it. Kibler noted that if the state decides to ban weapons as Chicago has done, there is really nothing a county or local law enforcement can do.

Residents in Deerfield were given 60 days to surrender their “assault weapons” or face fines of $1000 per day per gun. Upon careful reading of the ordinance, it appears that residents will be left with only revolvers, .22 caliber “plinking” rifles, and double barrel shotguns to defend their homes and families from criminals who could not care less about the law.

Fines for not disposing of the weapons range from $250 to $1000 per day per gun for those who choose not to comply with the city’s ordinance. While a fine may seem reasonable to some, as TFTP has reported on multiple occasions, failure to pay fines always results in police action. It is not far-fetched to predict major turmoil and arrests in the event of non-compliance.