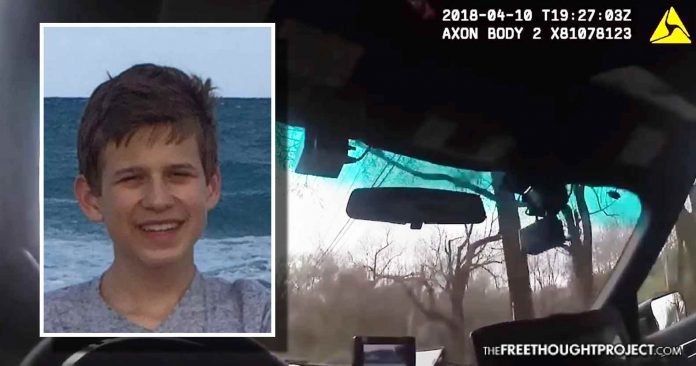 “I probably don’t have much time left. Tell my mom I love her if I die,” 16-year-old Kyle Plush told police—who had no problem ignoring him until it was too late.

Cincinnati, OH — A tragic case of police incompetence and neglect unfolded this month which led to the death of a young boy who desperately needed help from police. Calling 911 multiple times did nothing and the boy died as police ignored his pleas. Now, days after his tragic death, police have released body camera footage showing the officers who “searched” for the boy never even got out of their car and joked as he died.

Kyle Plush, a 16-year-old high school sophomore suffered a tragic fate earlier this month as he was crushed to death in the back of his family’s minivan. Kyle had gotten trapped under the third row seat while the car was parked in the school parking lot and he was unable to free himself.

After he was trapped, Kyle managed to reach his cellphone and dialed 911 to beg police to come help him. Despite calling 911 twice, however, police ignored his calls. The subject of these calls is now under investigation as the lack of response led to the boy succumbing to asphyxiation and dying.

As Cincinnati.com reports, the footage, released Friday, showed Cincinnati Officers Edsel Osborne and Brian Brazile did not check all the school’s parking lots. Police records show the officers were at the school for about 11 minutes, but the body camera footage only shows about 3 minutes of their search.

Exactly what happened to the other 8 minutes of footage is unclear.

As the music plays in the background, ensuring there would be no chance they could hear Kyle’s pleas for help, the officers crack jokes as the life leaves this young boy’s life.

“These kids drive betters cars than you do,” one officer says to the other.

According to the department’s manual of rules and regulations, officers “shall not play games, watch television or movies, or otherwise engage in entertainment while on duty, except as may be required in the performance of duty.” Whether or not this policy covers the music in cruisers remains unclear. However, it could’ve certainly been a factor in finding Plush.

“I don’t see nobody, which I didn’t imagine I would,” said one officer as he failed to do his job.

“I’m going to die here,” the sophomore told the dispatcher during his first 911 call, which was placed shortly after 3 p.m. on April 10. “I probably don’t have much time left. Tell my mom I love her if I die.”

As FOX reported at the time, Cincinnati police and a Hamilton County deputy sheriff responded to the area but couldn’t locate Plush. The dispatcher attempted to call Plush’s phone but there was no answer. Now, as the video shows, the reason they never found Kyle—is because they never actually got out of their car and looked.

Police apparently thought Kyle had prank called them and one officer even suggested as much. However, Kyle set it clear on the second call, made at at 3:35 p.m., during which he explained to another dispatcher that “this is not a joke.”

“I am trapped inside my gold Honda Odyssey van in the parking lot of the Seven Hills. … Send officers immediately. I’m almost dead.”

As WCPO reports, at several points in the second three-minute call, during which the operator does not respond and loud banging or heavy breathing can be heard, he attempts to call on the Siri automated iPhone assistant without success.

In spite of giving police an exact description of where he was and what make and model vehicle he was trapped in — nothing was done — and Kyle died.

“The young man was trapped in the third row bench seat, and it is called positional asphyxiation,” Hamilton County Prosecutor Joseph Deters, who is launching a comprehensive investigation, said. “We are actively trying to identify experts to assist in us in this investigation.”

Not until five hours later did his family member discover Kyle in the back of the van. By then, however, it was too late. Hamilton County Coroner Lakshmi Sammarco would rule Kyle’s death accidental “asphyxia caused by chest compression.”

According to Cincinnati Police Chief Eliot Isaac, the 911 operator had never relayed the make and model of the vehicle because the “dispatcher did not communicate with the caller.” Indeed, the silence during the call proves this lack of communication.

“Something has gone terribly wrong,” Isaac said at a news conference. “We need to find out why.”

According to Isaac, the dispatcher who took the second call was been placed on administrative leave pending the outcome of the investigation. However, he has since returned to normal duty.