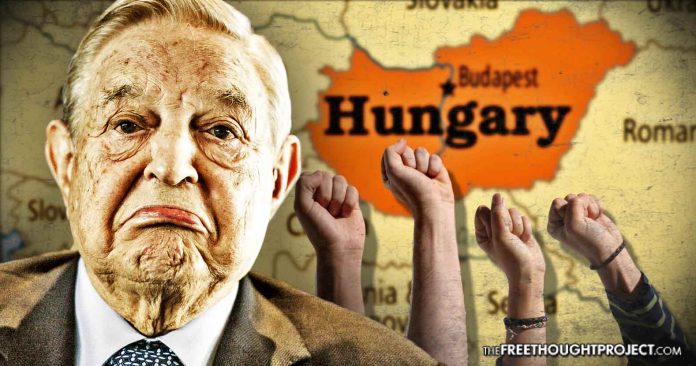 Budapest, Hungary – Lawmakers in Hungary introduced “Stop Soros” legislation in February to “empower the interior minister to ban non-governmental organizations (NGOs) that support migration and pose a national security risk.” As a result, George Soros’ Hungary-based Central European University, will relocate to Vienna, according to a report by Reuters.

The move against Soros-affiliated organizations by Hungarian Prime Minister Viktor Orban is due largely due to his foundation’s stance on mass immigration, as well as deep connections to numerous color revolutions, the Arab Spring, and many other political uprisings across the globe. Although “democracy promotion” is the stated mission, in reality, the many Soros-linked organizations largely operate in service of forwarding the Western globalist agenda.

Reuters reported that Central European University (CEU) “signed an agreement with the City of Vienna to open a new satellite campus there.” The move stems from a law in Hungary that set tougher restrictions on awarding licenses to foreign universities (CEU originated in New York).

“The new law stipulated that CEU must open a branch in its ‘home state’ of New York alongside its campus in Budapest and secure a bilateral agreement of support from the U.S. government,” reports Reuters.

Soros’ Open Society Foundation on Friday vowed to not leave the country until after the expected passage of the “Stop Soros” bill and accused Hungary’s government of trying to silence non-governmental organizations.

“The government has committed to passing the ‘Stop Soros’ law … It will be a symbolic step which serves to stifle non-government groups,” OSF spokesman Csaba Csontos told Reuters, noting that the organization was currently weighing its options.

Reuters reported that the European Commission has taken Hungary to the European Court of Justice over the Soros NGO draft law, accusing the government of violating the right to freedom of association.

But Orban, who won a landslide victory in this month’s election, has good cause to be suspicious of Soros’ OSF and its activities in Hungary—as one need only look at the example of Ukraine to clearly see how the hidden hand of Soros-linked organizations set the stage for later actions that resulted in a coup that overthrew the democratically elected leader of Ukraine.

A report in New Eastern Outlook explains precisely why Orban made moves to stifle Soros’ OSF:

Although the EU has commenced legal action against Hungary for the draft law, Orban stands by the legislation as he believes the Open Society Foundation promotes mass immigration against the will of the Hungarian people he was elected to represent.

In October, Orban said of the hedge fund billionaire, “The Soros network has an extensive sphere of influence within the European Parliament and other EU bodies. Its aim is to build a Europe of mixed population and to condemn the Hungarian government for opposing their view on migration.”

Anyone familiar with the history of the Soros Open Society Foundations in Eastern Europe, and around the world, since the late 1980s, will know that his supposedly philanthropic “democracy-building” projects in Poland, Russia, or Ukraine in the 1990s allowed Soros the businessman to literally plunder the former communist countries’ wealth, according to the New Eastern Outlook.

When Orban, who was elected to a third term on April 8, was asked about the prospect of an OSF departure during an interview with state radio MR1, he responded, “You might understand if I don’t cry my eyes out.” He went on to point out that migration would remain at the top of the European agenda.

The use of NGO’s to attempt to undermine states not beholden to the current Western neoliberal order has been an ongoing point of contention, which saw Russia kick USAID out of the country in 2012 amid accusations of attempting to incite protests and influence the Russian presidential elections.

As The Free Thought Project has reported, while Soros is not a James Bond villain, the billionaire financier’s efforts to control the direction of global politics, through the use of his vast fortune, cannot be disregarded, or understated, as it has a major effect on the manifestation and direction of global politics. When one person leverages such massive amounts of wealth into influencing global political discourse, it’s the average person’s voice that is drowned out by the sea of cash.