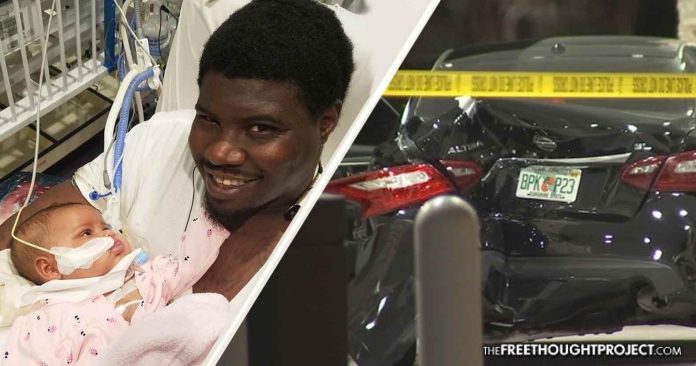 Largo, FL — Last month, the Free Thought Project reported on a story out of Florida in which police allegedly went to a funeral home to use a the finger of a man they killed to unlock his phone. Now, police are admitting to the act and claiming they did nothing wrong despite releasing a damning video.

The tragic incident began last month as Linus Phillip, 30, was approached by two Largo Police officers at a gas station, who alleged that the windows on his black Nissan sedan were too dark.

The window tint on the car—the alleged reason for the stop—must’ve been legal as the car Phillip was driving was a rental.

As the Tampa Bay Times reported, officer Matthew Steiner wasn’t sure if he had probable cause to stop the car, so he followed the car into the Wawa at 1215 Missouri Ave. N. He approached Phillip and asked for the rental agreement.

Steiner and Officer Prentice Ables claimed that when they were talking to Phillip, they smelled marijuana coming from inside his vehicle and attempted to detain him.

Phillip responded by getting into the driver’s seat of the vehicle. The Tampa Bay Times reported that Steiner “found himself trapped halfway in the vehicle as Phillip put it in reverse and accelerated with the driver’s side door open.”

Surveillance footage from the incident, released last week and used to clear the officers of any wrongdoing, does not appear to show the officers in harm’s way although police claim it does.

It is also important to point out that police originally claimed this video did not exist.

As police reported, Steiner pulled out his gun and fired four shots at Phillip in what police are calling “self-defense.” The officer fell back and the car continued to roll backward, hitting another car before it stopped in between two gas pumps. Phillip was later taken to the hospital where he was pronounced dead.

“At the time, the officer felt he was in peril for his own life and took action,” Largo Police Lt. Randall Chaney said at a news conference. “It stopped the action of the suspect at the time, and it may very well have saved people’s lives in the parking lot that night.”

However, as TFTP has reported numerous times, police officers shooting into moving cars often causes the driver’s foot to stick to the gas sending it uncontrollably speeding away. The officer’s actions could’ve gotten people killed.

What’s more, Phillip was not armed at the time of the confrontation, and while officers claimed they found cocaine and marijuana in his car, they did not find any weapons or evidence that would indicate that Phillip was planning to harm others—which contradicts Chaney’s statement.

The family also claimed that police took Phillip’s phone after they killed him and then visited the Sylvan Abbey Funeral Home and demanded access to Phillip’s dead body so that they could use his finger to unlock the phone. Now, as this recent revelation confirms, police indeed crashed the funeral to use a dead man’s finger to unlock his phone.

“So they are allowed to pull him out of the refrigerator and use a dead man’s finger to get to his phone. It’s disgusting,” said Victoria Armstrong, Phillip’s longtime girlfriend.

Charles Rose, a professor at Stetson University College of Law, tells the Tampa Bay Times that dead people can’t assert their Fourth Amendment protections because you can’t own property when you’re dead. But those rights could apply to whoever inherits the property.

Phillip was the father of two young children. His daughter died last year after a battle with leukemia and his son, Isaac, is 16 months old. Armstrong said she is hurt by the way police are portraying the father of her children.

“My son is no longer going to have a father or to make his dad proud. He’s not here anymore because of this and the police are slandering his name like some awful person,” Armstrong said. “We are fighting to find out what happened…He never would have done something to jeopardize being out of Isaac’s life.”

The family has since started a GoFundMe to help seek justice for their loved one.