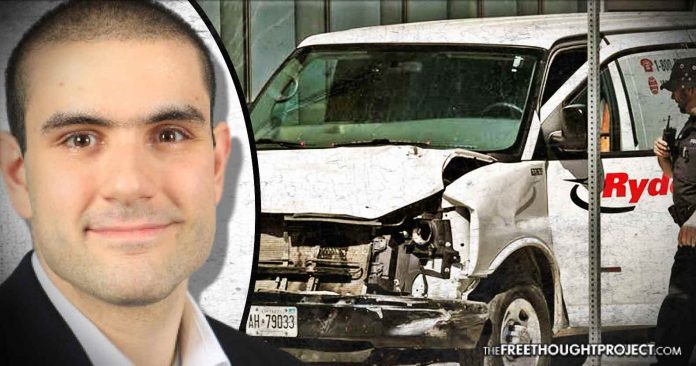 The US is reeling from another tragedy this week after a deranged madman walked into a Tennessee Waffle House and began firing rounds from an AR-15 which he was not allowed to have. Gun control measures that were in place—and actually led to the confiscation of Travis Reinking’s guns—did not stop this killer from carrying out the sick thoughts in his head.

Gun control was in place and it failed. What’s more, less than 48 hours after Reinking murdered four people in a Waffle House, another mentally ill man with a seeming thirst for blood went on a killing rampage in Canada, who has some of the strictest gun laws in the world.

In Canada there is no legal right to possess guns. Canadian civilians aren’t allowed to possess automatic weapons, handguns with a barrel shorter than 10.5 cm or any modified handgun, rifle or shotgun. Most semi-automatic assault weapons are also banned. But that didn’t stop Alek Minassian, 25, from killing 10 people and injuring 15 others.

Minassian’s desire to take lives was so strong that he didn’t need a gun to murder. He simply rented a Ryder van and went to it. Consequently, Reinking, who had the notoriously loathed AR-15 rifle didn’t kill half as many people as Minassian who had no gun at all.

He did, however, attempt to pretend to have one as he begged a police officer to kill him.

After multiple pedestrians plowed down on Toronto sidewalk, driver gets out holding what appears to be a gun. Police arrest him. No shots fired. pic.twitter.com/xWHeylS1d8

People sufficiently enraged to commit such crimes may also be motivated to find other ways, criminologist James Alan Fox of Northeastern University points out.

What’s more, every time there is a mass shooting in America, the anti-gun crowd is quick to take to the pulpits and begin spouting off incorrect information on how American gun ownership has made the United States deadlier than European countries. But this is simply not true.

After the tragic shooting in 2015 in which a gunman killed nine people in a Charleston, NC church, then-President Barack Obama took to the media to state that “we as a country will have to reckon with the fact that this type of mass violence does not happen in other advanced countries.”

Just days later, Sen Harry Reid backed him up, claiming — falsely — that “the United States is the only advanced country where this kind of mass violence occurs.”

After the tragic shooting in Parkland, FL in February, Sen. Chris Murphy of Connecticut echoed this sentiment when he said, “This happens nowhere else other than the United States of America.”

While America is certainly up on the list of gun violence, it’s not even in the top ten. According to a study by the Crime Prevention and Research Center — which was attacked by Snopes, who failed to prove it wrong — from the years 2009 to 2015, the US failed to enter the top ten list for the most mass shootings.

So which country has the largest death rate from public mass shootings?

Also, according to the study, there were 27% more casualties from 2009 to 2015 per mass shooting incident in the European Union than in the U.S.

“There were 16 cases where at least 15 people were killed,” the study said. “Out of those cases, four were in the United States, two in Germany, France, and the United Kingdom.”

“But the U.S. has a population four times greater than Germany’s and five times the U.K.’s, so on a per-capita basis the U.S. ranks low in comparison — actually, those two countries would have had a frequency of attacks 1.96 (Germany) and 2.46 (UK) times higher.”

The statistics debate and information war can go on forever — and it usually does — which is why actual conversation on what is really behind mass killings is suppressed or not even brought up.

The solution to preventing mass killings lies not in banning the tools used to carry them out. This is akin to putting a band aid on massive hemorrhage. Instead of focusing on the symptoms and tools used, there are a few people who are actually looking at the cause.

Stephen Paddock, Omar Mateen, Gavin Long, Eric Harris, Dylan Klebold, James Holmes, Nikolas Cruz, and more likely than not, Travis Reinking, all have one thing in common other than the mass murders they carried out. They were all reportedly taking prescription drugs which alter their state of mind and carry a host of negative side effects ranging from aggression and suicide to homicidal ideation.

It is important to point out that mass murder can also be carried out by those indoctrinated by religion or statism, but for the purpose of this piece, we will focus on what seems to be turning non-indoctrinated people into vicious murderers.

Suicide, birth defects, heart problems, hostility, violence, aggression, hallucinations, self-harm, delusional thinking, homicidal ideation, and death are just a few of the side effects caused by the medication taken by the monsters named above, some of which are known as SSRIs (selective serotonin reuptake inhibitors), or antidepressants.

Despite this deadly laundry list of potential reactions to these medications, their use has skyrocketed by 400% since 1988. Coincidentally, as antidepressant use went up, so have mass shootings.

The issue of psychotropic medication playing a role in mass shootings is not some conspiracy theory. It is very real and the drug manufacturers list these potentially deadly side effects on the very inserts of every one of these drugs. But the mainstream media and the government continue to ignore or suppress this information and steer the conversation to guns.

However, as this most recent tragedy in Canada proves, psychotic killers who want to cause harm will find a way to cause harm. How many more mass shootings and killings will have to take place before Americans wake up to this reality?