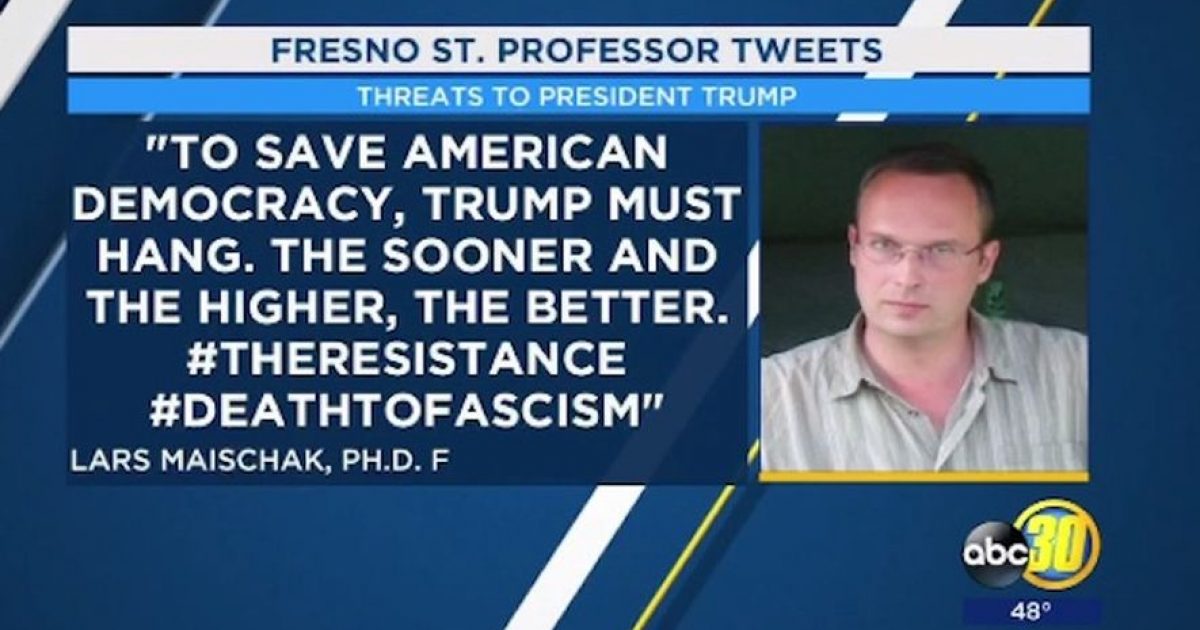 In the winter of last year, Lars Maischak had tweeted, “To save American democracy, Trump must hang. The sooner and the higher, the better. #TheResistance.”

The next day he inquired, “Has anyone started soliciting money and design drafts for a monument honoring the Trump assassin, yet?”

Toward the end of the week, he proposed the mass murder of Republicans, “Justice = The execution of two Republicans for each deported immigrant.”

Maischak was a history adjunct at Fresno State whose topics had included, “Marx and Hegel for Historians.”

President Castro eventually clarified that calls to murder the President of the United States and millions of Republicans, “do not reflect the position of the University.”

Had an adjunct called for the murder of Obama, the reaction would have been very different.

“I’m happy the witch is dead,” she gloated. “Can’t wait for the rest of her family to fall to their demise.”

“I will never be fired,” Jarrar then boasted in a tweet that tagged President Castro.

Once again, President Castro stepped forward to announce that Jarrar’s jeering of a deceased woman and her mourning family was not made as a “representative of Fresno State.”

But you have to wonder about that.

“One set of tweets, as horrible as they were, do not define us,” Castro claimed.

But Randa Jarrar has an ugly history long predating her latest controversy. Jarrar is a notorious BDS activist whose campaigns against Israel could cross the line into a defense of Islamic terrorists.

Jarrar had signed on to a letter condemning Israel for fighting back against Hamas. Among other disturbing claims, its signatories declared that they reject the idea “that Hamas is an irredeemable terrorist organization” and “recognize Hamas as a democratically elected ruling party.”

Hamas is a genocidal Islamic terrorist group that has called for the mass murder of Jews.

The first signatory to the letter was Steven Salaita: the infamous racist who lost a job offer at the University of Illinois after celebrating the kidnapping of three Jewish teens murdered by Hamas.

“Zionists: transforming “antisemitism” from something horrible into something honorable since 1948,” he later tweeted.

Another signatory was Amiri Baraka who lost his New Jersey poet laureate gig after claiming that the Jews had been warned to stay home on 9/11. Another famously anti-Semitic poem of his read, “I got the extermination blues, jew-boys. I got the Hitler syndrome figured… So come for the rent, jewboys.”

Matters turned ugly at Fresno State last year when Jews were blamed for an academic turf battle over the Edward Said Chair in Middle East Studies. Edward Said, a terrorist supporter and academic fraud, has often been a lightning rod. But this time the lightning had a distinctly anti-Semitic flavor. The “Jewish community” and “Jewish faculty” were variously blamed for Fresno State’s failure to fill the chair.

The truth though was that departmental disputes had held up the process not a Jewish conspiracy. But Randa Jarrar had instead circulated conspiracy theories and threatened that, “any other outcome will… will alienate faculty like myself and will severely damage our campus’s reputation across the world.”

But Jarrar has already done more to severely damage Fresno State’s reputation than anyone else could.

2017 wasn’t just a bad year because of Maischak. It was also the year that Greg Thatcher, an assistant professor of public health, decided to encourage his class to vandalize pro-life chalk messages while declaring, “College campuses are not free speech areas.” The resulting lawsuit noted that, “Thatcher returned with a group of approximately seven to ten Fresno State students. Acting at his direction, these students erased, obscured, and defaced Plaintiffs’ messages. One of them even stole Plaintiffs’ chalk and used it to write pro-abortion messages on the sidewalks.” The lawsuit was settled for $17,000.

Maischak, Jarrar and Thatcher are symptoms of the sickness at Fresno State.

Fresno is part of the California State University system. And yet, despite that, it’s a place where hatred thrives. Why did Randa Jarrar feel so confident that she could not only spew hate at a dying woman but misdirect critics to a suicide hotline number undermining its work saving lives by answering phone calls?

“I will never be fired,” Jarrar had gloatingly tweeted.

Fresno State’s spokeswoman could only convolutedly respond, “To answer the technical question: Can she not be fired? The answer is no.”

Randa Jarrar had every reason in the world to believe that she wouldn’t be fired. And she still does.

“This was beyond free speech. This was disrespectful,” President Castro said of Jarrar’s tweet.

As ugly as Jarrar’s tweets were, why were they worse than Maischak’s murderous rants? Maischak’s calls for Trump’s death actually resulted in an investigation by the Secret Service. But Castro responded by expressing appreciation for his unapologetic apology. How did Jarrar go further beyond free speech?

Barbara Bush was an apolitical and likable personality who had just passed away. The outrage over Jarrar’s comments came from a broader spectrum than the anger over Maischak’s tweets.

What Maischak did was more unacceptable legally, but more acceptable socially.

Calling for President Trump’s murder is more socially acceptable on the left than mocking Barbara Bush’s death. President Castro wasn’t concerned about the legality or decency of the tweets. He was reacting to the public perception of them among the demographic with the biggest sway on campus.

But Jarrar’s hatred came out of the same academic safe space where Maischak’s ravings had been nurtured. The lack of decisive action in the Maischak and Thatcher cases sent Jarrar the message that she had nothing to worry about. And the aftermath of both cases testify that she really doesn’t.

After an investigation, some sort of half-hearted apology (that will eventually be disavowed), a bone thrown to the outraged critics, everything will be back to the way it was. And Jarrar will go on indoctrinating vulnerable young minds with her twisted hateful thoughts about America and Israel.

The likeliest outcome is that Jarrar’s colleagues, in and out of Fresno State, will rally to her defense. They will claim that the entire controversy was stirred up by Islamophobic sites against a Muslim professor. Jarrar will claim that she was the victim of numerous death threats. The media will switch to covering the supposed death threats. Just as in the Salaita and Maischak cases, they will obscure what she said.

Petitions will denounce President Castro for surrendering to “Islamophobes” by criticizing Jarrar.

As an older, tenured professor wired into an anti-Israel activist circle and the PEN gang, Randa Jarrar has far more support options. And she will continue collecting the $100,000 salary that she bragged about.

And Fresno State will go on serving as a safe space for faculty who don’t just hate, but lust for death.

“Execution of two Republicans for each deported immigrant” Lars Maischak had tweeted.

“Can’t wait for the rest of her family to fall to their demise,” Randa Jarrar tweeted.

This isn’t just hate. These are calls for death. For the murder and demise of living people.

Fresno State has gone beyond nurturing radicals and is providing a safe space for a murderous cult of Islamic and leftist hate. It’s not enough for President Castro to disavow their words and walk away.

There must be an investigation that explores why Fresno State has become a safe space for hate. And why its faculty feels comfortable and confident calling for the deaths of their political opponents.

Because it’s hate, not the campus winery or planetarium, that Fresno State is becoming known for.