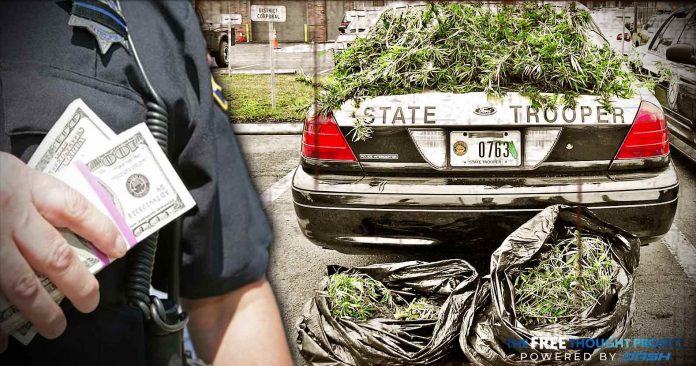 Newark, NJ — A police officer in New Jersey was arrested by the FBI after he was caught selling drugs out of his patrol car and near the police department, in a sting set up by undercover agents.

Ruben McAusland, 26, reportedly sold roughly $12,000 in drugs to an undercover buyer who was working with the FBI, US Attorney Craig Carpenito said in a statement. McAusland is accused of selling at least 35 grams of marijuana, 48 grams of heroin, 31 grams of cocaine and 31 grams of crack between October 2017 and April 2018.

According to the statement from the FBI:

“It’s a surprising case—that an officer, who is supposed to be preventing the sale of drugs, did just the opposite,” FBI spokesman Will Skaggs said.

However, police corruption in the war on drugs is more than a matter of just “a few bad apples.” In fact, the conditions that are created by prohibition guarantee that police will take advantage of their position to act outside of the law since they are less likely to get caught or face any consequences if they do. Police are often unsupervised when finding large amounts of drugs or money that far surpass the value of their paychecks, so there is no wonder that stories of drug dealing cops are a common occurrence.

McAusland is not the first cop to get caught selling drugs out of his car either—back in 2015, The Free Thought Project reported on the story of Officer Donald Jordan from Anderson Indiana, a cop that worked security at a local school who was caught selling drugs.

Jordan was corrupt in many more ways than just selling drugs. In one of the reports against him, it was said that he gave a woman three hydrocodone pills and demanded that she touch his genitals instead of giving him money. When she refused, he reportedly exposed himself and physically forced her hand into his lap.

According to one of the witnesses, Jordan said that he was a “better criminal than he is a cop” and even admitted that he was “corrupt.”

In the case of McAusland, most of the deals he made were extremely high value, and if convicted of all of the charges against him, he faces up to 40 years in prison. Although, it is rare for an officer to see the type of sentencing that the average person would—they often end up getting a slap on the wrist.

In another case from 2015, Perry Betts, one of the most corrupt narcotics officers in the history of the Philadelphia Police Department, was fired for selling drugs, rehired and then fired again. His rehiring came after he was acquitted in a federal corruption case, in which he was accused of 47 different chargesincluding extortion, robbery, kidnapping, and drug dealing.

Betts was acquitted of all of those charges along with six co-defendants who were also Philadelphia Police Officers implicated in the conspiracy. The officers were not only acquitted on all 47 counts, but they also got their jobs back and were even given a parade.

Meanwhile, people who are caught with these same substances have their lives torn apart, sometimes to the point of disrepair, and the country’s drug abuse problem has only gotten worse.

According to a U.S. government study, released by the National Center for Health Statistics, drug overdoses in the U.S. have increased by 23 percent between the years of 2010 and 2014.

In certain areas of the world, like Portugal, where all drugs have been decriminalized, there are far fewer overdoses than there are in prohibition countries. The Washington Post reported earlier this year that drug overdoses are extremely rare in Portugal, and they have some of the lowest rates of addiction in the world. Also, there is growing evidence that a person’s social, economic and personal factors have a much larger impact on their probability of getting addicted than we previously thought.