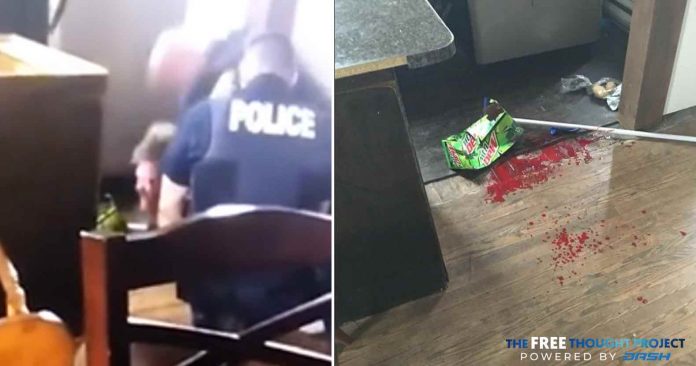 New Castle, PA — A Pennsylvania police officer has been suspended after a gruesome video surfaced showing him repeatedly smash a man’s head into the floor until he fell unconscious.

The video, which was posted to Facebook this week, shows a New Castle Police officer unnecessarily and repeatedly slamming a man’s head into the floor until the man is left unconscious in a pool of his own blood.

According to police, they were responding to the home Monday afternoon after a call about a domestic disturbance involving an intoxicated male and a juvenile male. Police claim the man ran in the direction of a kitchen knife which prompted the repeated head smashing.

“F**k you motherf**ker!” the cop yells as he slams the man’s head into the ground. “Errrr!” he growls.

“Jesus Christ,” he says as the man now lies there unconscious. “I think he’s dead.”

The Free Thought Project reached out to the New Castle Police department who released the following statement:

The incident occurred on April 23, 2018 at approximately 5:34 pm. NCPD officers were dispatched to a residence in reference to a domestic disturbance involving an intoxicated white male, who had assaulted a juvenile male.

The NCPD incident report indicates the intoxicated male attempted to run towards a knife lying on the kitchen counter, causing the first officer on scene to begin struggling with the male.

A second NCPD officer arrived on scene and attempted to subdue the male through the use of a taser three times without success.

The video appears to show the second officer subdued the intoxicated male through force. The male was then handcuffed and transported to UPMC Jameson Hospital, where he was treated for cuts to the head.

The male was subsequently released from the hospital and transported to the Lawrence County Jail on charges of simple assault, harassment and resisting arrest.

The officer involved in the use of force has been placed on administrative leave pending an internal investigation.

Please allow us time to conduct a full, fair and impartial investigation. Thank you.

The woman who uploaded the video to Facebook named the officer seen smashing in the man’s head as “Officer Williams, badge number 45.” She says she got the video from the man’s son’s page before Facebook removed it.

According to the woman, she says the man was handcuffed as the officer slammed his head into the ground. However, it is difficult to verify this from the video. What is clear, however, is that the man didn’t appear to be a threat to the officers who had him face down on the ground.

The video has since prompted backlash against the New Castle Police Department as hundreds of people spoke out on their Facebook page.

“My concern is.. The man was on his stomach… Explain to me how was he a threat… That cop was in rage and unless I’m blind the video clearly shows that,” one Facebook user wrote.

“Absolutely disturbing the way he treated that guy. Even if hitting his head with that much force was necessary. Why so many times? Why ?!?” another user said.

“There is no excuse for your officers brutality… he better not return to the force,” wrote another person.

If you would like to peacefully voice your concern over the video below, you can do so at the department’s Facebook page here.