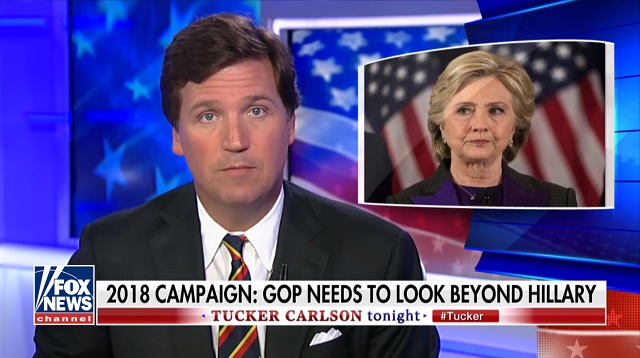 Fox News host Tucker Carlson said Tuesday night that Republicans should run against the Democrats’ “openly bigoted” views “blaming an entire ethnic group for the country’s problems,” their push to “eliminate our country’s borders,” their attacks on the Second Amendment and their “agitating for an actual war against Russia” — not Hillary Clinton.

“According to recent reports at Fox, Republican Party leaders have a secret plan to win the mere terms,” the “Tucker Carlson Tonight” host said. “Instead of telling voters what they would do, they’ve decided to run against Hillary Clinton, the former Democratic nominee. It worked last time. The idea is that it will work again. The appeal is obvious. No one likes Hillary Clinton, even people who are paid to pretend they like her. The downside is, it’s not really a relevant argument. Hillary Clinton does not run anything anymore. She does not represent the modern Democratic Party.”

“They’ve moved on to another planet, and that’s the point,” he continued. “Democratic Party leaders are saying things far more extreme than anything the midwestern Methodist like Hillary Clinton ever would have said or thought. They have become openly bigoted for example, blaming an entire ethnic group for the country’s problems. They have called for eliminating our country’s borders, the right to self-defense, even the distinction between male and female. They are at war with nature and with common sense. And by the way, they are agitating for an actual war against Russia. They are insane. Some of them are dangerous. Somebody ought to run against them, not against the ghost of some elderly retired nominee from the last cycle. Yet somehow, the Republicans in Congress say they are not going to do that. Are they?”

Carlson followed up the monologue with an interview with Rep. Jim Jordan (R-OH), the co-chair of the House Freedom Caucus and reiterated his skepticism of running against Clinton this November.

“I don’t want to pooh-pooh the idea of running against Hillary,” he said. “I love doing Hillary segments. They are hilarious. They are a little mean, but it’s fun. But the Democratic Party of right now is not the party of Hillary Clinton. It’s an openly extremist, racist party, I would argue. And, I think it’s obvious that Republicans in opposition should run against them.”

All Tucker left out was their open advocacy for Big Tech’s censoring of the internet.

The Democrats modern platform is one of racial hate, mass censorship, open borders, civilian disarmament and politically correct thought policing, yet the Republicans could actually lose because they’re going to run on “tax cuts,” “moving our embassy to Jerusalem” and Hillary Clinton.