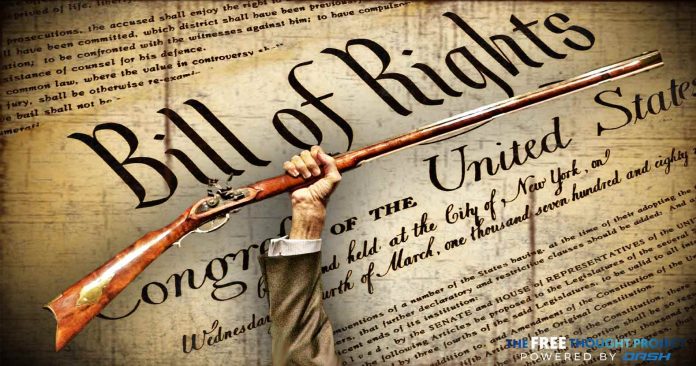 A showdown is brewing in the State of Oregon following gun control advocates’ proposed assault weapons ban called Initiative Proposition 43 (IP43). Under the guise of “gun control” and “safety of our children,” proponents of the measure aim to effectively ban all weapons produced since the Civil War. But several counties are pushing back with their own Second Amendment Preservation Ordinances.

Klamath and Deschutes Counties are attempting to push back against the ordinance by passing their own county-wide ordinances to disallow the county sheriff from enforcing any state or federal law which would infringe on county residents’ rights to keep and bear arms. It’s effectively a ban on gun bans.

Preserve the right of the People of, on and in Klamath County to:
Keep and bear arms as originally understood; in self-defense and preservation, and in defense of one’s community and country.
Freely manufacture, transfer, sell and buy firearms, firearm accessories and ammunition, which are designed primarily for the same purposes.

Oregon’s IP43 is being billed as an “asssault weapons” ban, something even gun owners might support. But in essence, the proposed ban would make illegal nearly all semi-automatic weapons, make criminals out of Oregon residents who prefer to hold on to their guns, and put fear in others who refuse to register their firearms with local law enforcement.

Representative Bill Post, a Republican, is apparently attempting to sound the warning alarm for residents about the severity of the law and the gun confiscation implications which will result from the passage of IP43 currently being planned for the November ballot. He said:

This is completely out of hand — I couldn’t believe it. I’ve been told so many times by people in favor of gun control: ‘no one is coming to take your guns.’ This (IP43) explicitly comes for your guns…This got zero comment or help from anybody in Oregon’s Democratic leadership. The reason they’re not supporting this is that they’re not stupid. They know this would bring out the greatest red (Republican) wave of votes in Oregon history…We must do something. But this is crazy.

This ballot initiative classifies practically every semi-automatic firearm as an assault weapon – rifles, shotguns, and even handguns. These are firearms you’ll find in every gun store in America. Should this pass then you’ll have to choose between surrendering your only means of self-protection or registering them with the authorities. Then, when the next ballot initiative passes, they’ll know exactly what you have, where it is, and come to take it. Maybe now when we say they’re coming for you’re [sic] guns you’ll believe us.

The county measures intended to preserve county residents’ rights to keep the firearms they own are not likely to be able to stand up in court if IP43 is passed in November. Just as IP43 would make criminals out of law abiding citizens across the State of Oregon, so, too, would the counties’ Second Amendment Preservation ordinances make criminals out of duly elected law enforcement officials such as sheriffs.

Few sheriffs, even if the county ordinances pass in response to IP43, would dare to place their liberty and career on the line to comply with a local ordinance. Rather, they would likely cow tow to state and federal laws and begin enforcing the new law.

As TFTP reported in April, one Illinois town, Deerfield, already passed a gun grabbing local ordinance which gave its citizens 60 days to turn in their guns or face $1000 fines per gun per day. Now, it seems, an entire state, the State of Oregon, is attempting to pass its own gun grabbing scheme (IP43), and is using fake promises to do so, saying it will keep kids safe by banning guns.

Banning guns does not keep citizens safe. London has a near total gun ban yet murders, have since surpassed New York City’s crime rates.

Banning guns does not keep citizens safe. Banning government from making criminals out of law-abiding citizens, however, does keep citizens safe. When law enforcement sets its sights on drug users and those who are impoverished, citizens not only lose their freedom, they lose their wealth as well. Civil asset forfeiture is often used to take wealth from those convicted under the War on Drugs, and those who are impoverished. If a War on Guns is launched in the U.S., citizens will lose much more than their semi-automatic weapons. They will lose safety, freedom, and assets to a government all too eager to take it from them.

TFTP recently spoke with a Tennessee man who was convicted of dealing marijuana. He said the FBI, the DEA, and local law enforcement kicked in his door, pocketed over 40,000 dollars in cash, and, as part of his plea deal, forced him to pay the government over $200,000 in a promissory note, all because he was attempting to help people treat their illnesses with a plant.

Not only did they take nearly all of his possessions, label him a felon for life, but they have placed him into a state-sponsored form of indentured servitude for life. He fears revealing his identity for worries he will again be targeted.