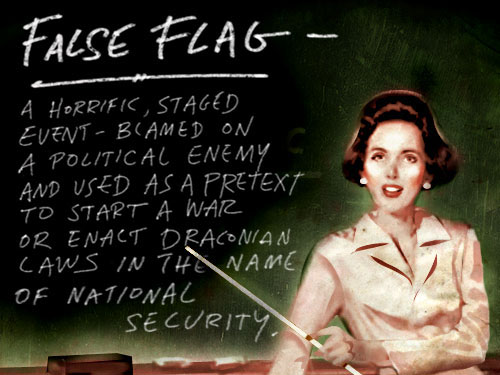 False Flag is a concept that goes back centuries. It was considered to be a legitimate ploy by the Greeks and Romans, where a military force would pretend to be friendly to get close to an enemy before dropping the pretense and raising its banners to reveal its own affiliation just before launching an attack. In the sea battles of the eighteenth century among Spain, France and Britain hoisting an enemy flag instead of one’s own to confuse the opponent was considered to be a legitimate ruse de guerre, but it was only “honorable” if one reverted to one’s own flag before engaging in combat.

Today’s false flag operations are generally carried out by intelligence agencies and non-government actors including terrorist groups, but they are only considered successful if the true attribution of an action remains secret. There is nothing honorable about them as their intention is to blame an innocent party for something that it did not do. There has been a lot of such activity lately and it was interesting to learn by way of a leak that the Central Intelligence Agency (CIA) has developed a capability to mimic the internet fingerprints of other foreign intelligence services. That means that when the media is trumpeting news reports that the Russians or Chinese hacked into U.S. government websites or the sites of major corporations, it could actually have been the CIA carrying out the intrusion and making it look like it originated in Moscow or Beijing. Given that capability, there has been considerable speculation in the alternative media that it was actually the CIA that interfered in the 2016 national elections in the United States.

False flags can be involved in other sorts of activity as well. The past year’s two major alleged chemical attacks carried out against Syrian civilians that resulted in President Donald Trump and associates launching 160 cruise missiles are pretty clearly false flag operations carried out by the rebels and terrorist groups that controlled the affected areas at the time. The most recent reported attack on April 7th might not have occurred at all according to doctors and other witnesses who were actually in Douma. Because the rebels succeeded in convincing much of the world that the Syrian government had carried out the attacks, one might consider their false flag efforts to have been extremely successful.

The remedy against false flag operations such as the recent one in Syria is, of course, to avoid taking the bait and instead waiting until a thorough and objective inspection of the evidence has taken place. The United States, Britain and France did not do that, preferring instead to respond to hysterical press reports by “doing something.” If the U.N. investigation of the alleged attack turns up nothing, a distinct possibility, it is unlikely that they will apologize for having committed a war crime.

The other major false flag that has recently surfaced is the poisoning of Sergei Skripal and his daughter Yulia in Salisbury England on March 4th. Russia had no credible motive to carry out the attack and had, in fact, good reasons not to do so. The allegations made by British Prime Minister Theresa May about the claimed nerve agent being “very likely” Russian in origin have been debunked, in part through examination by the U.K.’s own chemical weapons lab. May, under attack even within her own party, needed a good story and a powerful enemy to solidify her own hold on power so false flagging something to Russia probably appeared to be just the ticket as Moscow would hardly be able to deny the “facts” being invented in London. Unfortunately, May proved wrong and the debate ignited over her actions, which included the expulsion of twenty-three Russian diplomats, has done her severe damage. Few now believe that Russia actually carried out the poisoning and there is a growing body of opinion suggesting that it was actually a false flag executed by the British government or even by the CIA.

The lesson that should be learned from Syria and Skripal is that if “an incident” looks like it has no obvious motive behind it, there is a high probability that it is a false flag. A bit of caution in assigning blame is appropriate given that the alternative would be a precipitate and likely disproportionate response that could easily escalate into a shooting war.

Strategic Culture Foundation provides a platform for exclusive analysis, research and policy comment on Eurasian and global affairs. We are covering political, economic, social and security issues worldwide. Since 2005 our journal has published thousands of analytical briefs and commentaries with the unique perspective of independent contributors. SCF works to broaden and diversify expert discussion by focusing on hidden aspects of international politics and unconventional thinking. Benefiting from the expanding power of the Internet, we work to spread reliable information, critical thought and progressive ideas.