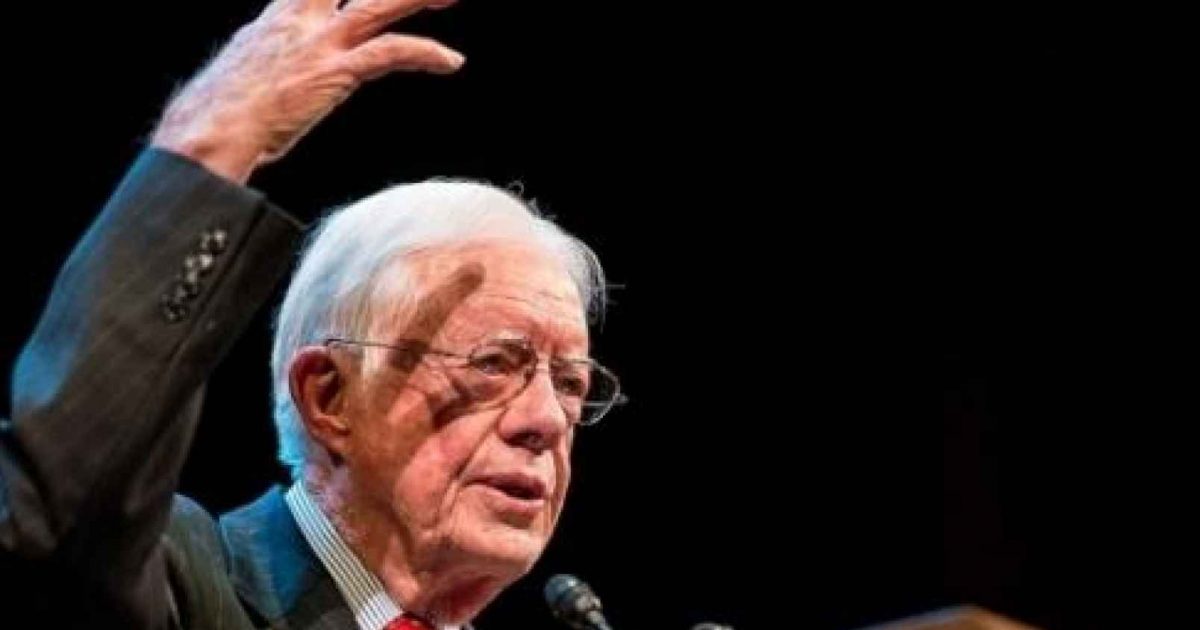 The Washington Free Beacon reported Monday that the Zionist Advocacy Center is alleging in a suit that former President Jimmy Carter’s nonprofit organization, the Carter Center, “has used taxpayer funding to provide material support to international terrorist groups, including Hamas.” Given Carter’s longstanding and abundantly established hatred for the Jewish state, this allegation is no great shock. Nonetheless, the specter of an American President’s foundation funding a jihad terrorist group demonstrates how far we have fallen.

The Zionist Advocacy Center further alleges that the Carter Center “received more than $30 million in taxpayer grants while violating federal statutes barring it from using the cash to provide material support to terror groups.” Not only that: “The plaintiffs maintain the Carter Center has violated the law by hosting designated terrorists at is facilities, as well as by providing various forms of assistance to the Palestinian terror group Hamas and other known terror entities.”

No one who has watched Carter over the years can really be surprised. Back in 2008, Carter claimed that Hamas was prepared to accept the right of Israel to “live as a neighbor next door in peace.” He had no grounds for saying so, and it wasn’t remotely true, but this claim helped him perpetuate the fiction that the Israelis, not the Palestinians, were responsible for the failure of all peace talks and the ongoing tensions between the two.

Two years before that, Carter published the notorious book Palestine: Peace Not Apartheid

, in which he ignored the jihad imperative to destroy Israel, and the numerous maximalist and even genocidal declarations from Palestinian leaders, and painted an outrageous fantasy of a peaceful Palestinian people, ennobled by suffering and besieged by a rapacious Israeli war machine that was imposing apartheid policies in the name of a false need for security.

In a review in the Huffington Post (of all places), Alan Dershowitz eviscerated Carter’s book, pointing out that in order to make his case, Carter not only had to ignore and misrepresent present-day realities, but rewrite history as well:

He barely mentions Israel’s acceptance, and the Palestinian rejection, of the U.N.’s division of the mandate in 1948.

He claims that in 1967 Israel launched a preemptive attack against Jordan. The fact is that Jordan attacked Israel first, Israel tried desperately to persuade Jordan to remain out of the war, and Israel counterattacked after the Jordanian army surrounded Jerusalem, firing missiles into the center of the city. Only then did Israel capture the West Bank, which it was willing to return in exchange for peace and recognition from Jordan.

Carter repeatedly mentions Security Council Resolution 242, which called for return of captured territories in exchange for peace, recognition and secure boundaries, but he ignores the fact that Israel accepted and all the Arab nations and the Palestinians rejected this resolution. The Arabs met in Khartum and issued their three famous “no’s”: “No peace, no recognition, no negotiation” but you wouldn’t know that from reading the history according to Carter.

Many find it odd that the renowned architect of the Camp David Accords would stoop to all this; but it must be remembered that at Camp David, Israel gave up a great deal in exchange for little more than promises – promises that have been repeatedly broken. Jimmy Carter’s record of hostility toward the Jewish state spans his entire career. He has never publicly recognized that it faces the same jihad foes that attacked America on September 11, 2001, and counsels policies of appeasement and accommodation that, if fully implemented, would only embolden the jihadis and further weaken Israel.

And so now it is being claimed in a court case that the Carter Center has been aiding Hamas. Longtime Carter watchers can only say: of course.