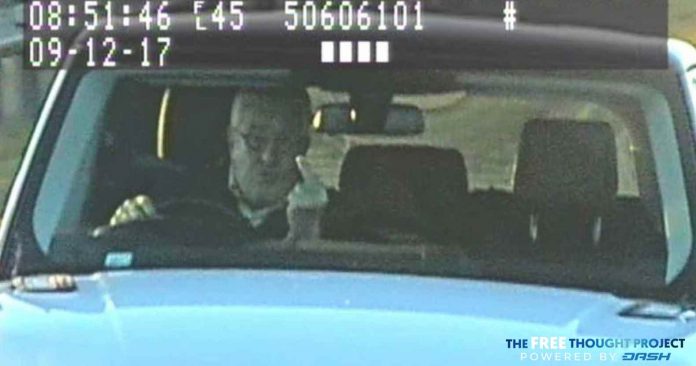 On Monday, the North Yorkshire Police department took to Twitter to harass and intimidate otherwise entirely innocent people by bragging about a man going to jail who had been caught on one of their traffic cameras flipping it off.

“Top tip: If you want to stay out of trouble, don’t do what this driver did and swear at our mobile safety cameras while driving past in a car fitted with a laser jammer. Today he’s beginning 8 months in jail for perverting the course of justice,” tweeted the department.

Top tip: If you want to stay out of trouble, don't do what this driver did and swear at our mobile safety cameras while driving past in a car fitted with a laser jammer. Today he's beginning 8 months in jail for perverting the course of justice. https://t.co/Y5jpeOlt96 pic.twitter.com/rKQRVgNkB1

According to the police department, “perverting the course of justice” has nothing to do with kidnapping and caging a man who has caused harm to no one and everything to do with detecting lasers and raising one’s middle finger.

Shortly after putting the man’s photo out on Twitter, the police department then released video from their camera to further shame him.

And here's the video of him in action… pic.twitter.com/8SuvQGbAqb

The victim in this case is 67-year-old Timothy Hill, a company director who lives in Grassington, England. The senior citizen, who will now likely lose his job will spend the next 8 months in a cage was a repeat “offender” who was photographed multiple times driving through the red light cameras while flipping the bird. 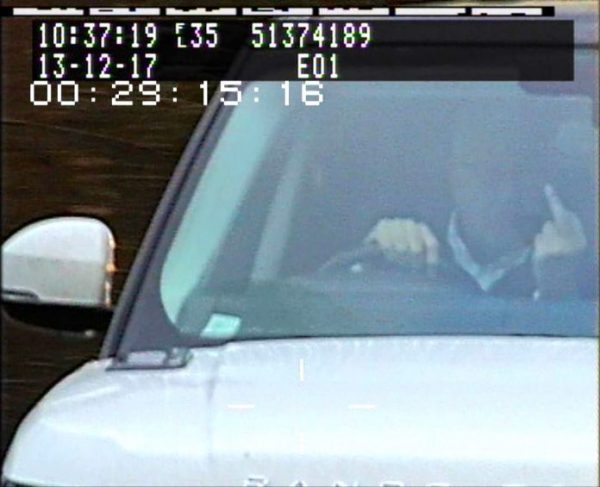 On three separate occasions, Hill was photographed raising his middle finger as he drove through by the surveillance state devices. Hill was a serial rights flexer, but this apparently angered police who launched an investigation into the 67-year-old—not because he was caught harming someone one—but because he raised his middle finger while using a device that didn’t let police spy on him.

According to the department, Police were unable to ascertain his speed but charged him with perverting the course of justice, which he pleaded guilty to at court.

What’s more, to make sure they struck fear into the hearts of any other Brits who’d dare to drive through a red light camera with a laser jammer and a middle finger, the judge went out of his way to make an example of him.

“The judge who jailed Hill said such actions ‘strike at the heart’ of the justice system and his sentence must act as a deterrent to others,” noted the North Yorkshire police department.

We now see George Orwell's nightmare taking shape in the UK…
Can anyone imagine a government so drunk with power that this act of free speech becomes a crime worthy of long-term incarceration? https://t.co/Zp77Lj6vsH

Traffic Constable Andrew Forth, who led the investigation for North Yorkshire Police, released the following statement after Hill had to take a guilty plea to avoid an even longer prison sentence:

“If you want to attract our attention, repeatedly gesturing at police camera vans with your middle finger while you’re driving a distinctive car fitted with a laser jammer is an excellent way to do it.

“It’s also an excellent way to end up in prison. As Hill’s case shows, perverting the course of justice is a very serious charge which carries a custodial sentence.”

Luckily, the reaction from many Brits was one of disgust and revolt.

Modern day representation of the the American Colonials to the English Crown c. 1776. https://t.co/lEs9RKrGdn

This is why we broke up with you and made our own country https://t.co/kGU0ZDfuJY

In just the last month, TFTP has reported on three insanely Orwellian cases out of Britain, this being one of them.

The other case involved the kidnapping and caging of a man for making a joke video of his dog “saluting Hitler” to poke fun at his girlfriend. In that case, he harmed no one and was prosecuted for his free speech only.

In another horrific case, Britain’s government is forcing a couple to essentially kill their own baby. Alfie Evans will likely succumb to his illness in the next few days and his parents will have to live with the fact that the British government would not let them seek treatment that could’ve saved his life.

Alfie’s father, Thomas Evans has been attempting to appeal these rulings so the family can fly to the Vatican hospital in Rome, where they have been offered free medical care, with experimental treatments that are not offered in the UK.

Despite the fact that this will come at no cost to the UK government or the hospital, they are legally forcing the family to stay in the UK, where they will be denied medical care because the government decided that it was not worth the effort to keep the boy alive. Even worse, the hospital has not been feeding the child while he is under their care, which is now court mandated.

The residents of North Yorkshire can now rest easy knowing that police are locking up elderly men for raising their middle finger, throwing people in jail for YouTube videos, and sanctioning the death of babies—while a human trafficking and child rape epidemic sweeps the nation going almost entirely uninvestigated by police.