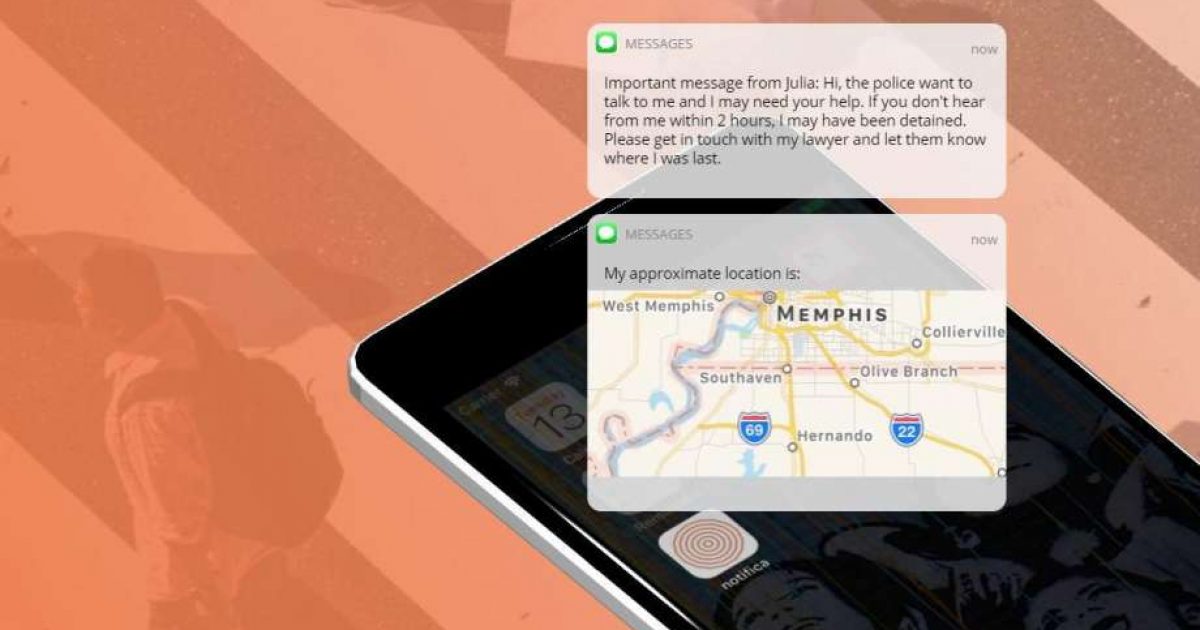 We know that George Soros funds a plethora of organizations all over the world that seem to undermine the very societies they are embedded in, and this latest news is no different as a Soros-funded organization has now announced a new app to aid illegal aliens in the united States to avoid arrest by federal agents and subsequent deportation.

According to Laredo, Texas-based LMTOnline, the app named Notifica was produced by United We Dream, the largest national immigrant youth-led organization for smartphones.

The app, called Notifica, allows immigrants here illegally to activate a plan if they come in contact with immigration law enforcement authorities or find themselves at risk of being detained.

Users can prepare a set of automatic messages to alert — with one click — family members, lawyers and others if they, or someone they care about, encounter immigration enforcement authorities. The tool was developed last year and distributed on a small scale and is now available for the public on Google and Apple apps stores.

Smartphone applications to deal with arrests by immigration agents are evolving in an era of increased enforcement on the southern border, as well as inside the country.

To give you an idea of people who might use the app, LMT added:

Damaris González, a recipient of the Deferred Action for Childhood Arrivals program along with her two sisters, said she and her family are installing the app on their phones.

“My mom doesn’t have documents, so I want to make sure that we are prepared and know what to do if something happens,” said González, an organizer with United We Dream.

González, who was brought to the U.S. illegally in 1985 when she was 9 years old, said Notifica “will make it easier for my family to contact me in the case, God forbid, something may happen.”

OK, so Ms. Gonzalez’s mother came here when she was 9 in 1985.  That would make her approximately 42 years old.  Why did she never seek citizenship when she turned 18?  Surely, she understood her illegal status at the time and I’m sure things could have been handled properly.  We’re not told in the article whether or not she did that.  We’re only told that her daughter wants to continue to protect her illegal mother, and apparently herself.

Judicial Watch provides us with more about the group that produced the app.

The group behind the app is called United We Dream, which describes itself as the country’s largest immigrant youth-led community. The nonprofit has more than 400,000 members nationwide and claims to “embrace the common struggle of all people of color and stand up against racism, colonialism, colorism, and xenophobia.” Among its key projects is winning protections and rights for illegal immigrants, defending against deportation, obtaining education for illegal immigrants and acquiring “justice and liberation” for undocumented LGBT “immigrants and allies.” Illegal aliens encounter lots of discrimination, which creates a lot of fear, according to United We Dream. “We empower people to develop their leadership, their organizing skills, and to develop our own campaigns to fight for justice and dignity for immigrants and all people,” United We Dream states on its website, adding that this is achieved through immigrant youth-led campaigns at the local, state, and federal level.

United We Dream started as a project of the National Immigration Law Center (NILC), according to records obtained by Judicial Watch. Between 2008 and 2010, NILC received $206,453 in U.S. government grants, the records show. The project funded was for “immigration-related employment discrimination public education.” Headquartered in Los Angeles, NILC was established in 1979 and is dedicated to “defending and advancing the rights of immigrants with low income.” The organization, which also has offices in Washington D.C. and Berkeley, California claims to have played a leadership role in spearheading Barack Obama’s amnesty program known as Deferred Action for Childhood Arrivals (DACA), which has shielded hundreds of thousands of illegal aliens from deportation. “Ultimately, NILC’s goals are centered on promoting the full integration of all immigrants into U.S. society,” according to its website.

Both the NILC and its offshoot, United We Dream, get big bucks from Soros’ Open Society Foundations (OSF). In fact, both nonprofits list OSF as a key financial backer. In the United States Soros groups have pushed a radical agenda that includes promoting an open border with Mexico and fighting immigration enforcement efforts, fomenting racial disharmony by funding anti-capitalist black separationist organizations, financing the Black Lives Matter movement and other groups involved in the Ferguson Missouri riots, weakening the integrity of the nation’s electoral systems, opposing U.S. counterterrorism efforts and eroding 2nd Amendment protections. OSF has also funded a liberal think-tank headed by former Hillary Clinton campaign chairman John Podesta and the scandal-ridden activist group Association of Community Organizations for Reform Now (ACORN), so corrupt that Congress banned it from receiving federal funding.

I ask, should this not be considered aiding and abetting criminals?  The law seems pretty clear on the matter.

knowing that a person is an alien, brings to or attempts to bring to the United States in any manner whatsoever such person at a place other than a designated port of entry or place other than as designated by the Commissioner, regardless of whether such alien has received prior official authorization to come to, enter, or reside in the United States and regardless of any future official action which may be taken with respect to such alien;

What I want to know is why would those enforcing immigration laws not use the same app to locate illegal aliens?  Perhaps they will and United We Dream would inadvertently aid in their arrest.

Furthermore, I would submit that United We Dream is also in violation of the law by knowingly putting out an app for the sole purpose of aiding illegals escape arrest.