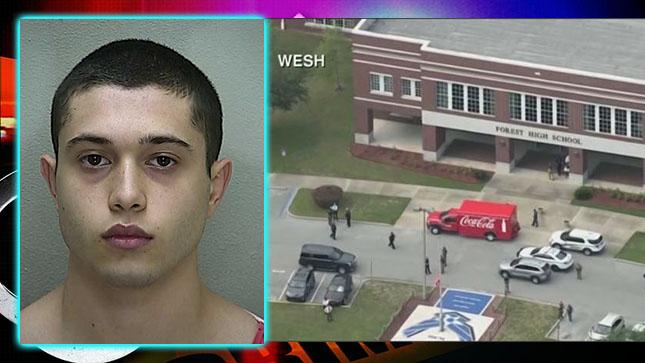 A 19-year-old male fired his gun into a Florida high school, injuring one student, but he was stopped by a school resource officer, who also arrested him.

Now, this is not your typical school shooting.  The 19-year-old, identified as Sky Bouche, entered Forest High School in Ocala, Florida on Friday, April 20, 2018 with a shotgun in a guitar case attempting to blend in with the other students, said Craig Ham, deputy superintendent of Ocala schools operations.

As he passed by a classroom, he shot at the bottom of a classroom door, which was locked.

Pellets from the blast hit one student in the ankle and he was taken to the hospital with non-life threatening injuries.

“I shot through the door,” Bouche told reporters as he was being led away by police and when they asked him why he did it, he replied, “I didn’t see anyone.”

Marion County Sheriff’s Deputy James Long said that he heard a loud bang and rushed to the scene where the shot occurred, taking Bouche into custody.

The sheriff’s department’s SWAT team then did a secondary sweep through the building to ensure there were no other shooters present.

Here’s a video of police breaching my class after shots were heard about 10 feet outside my classroom. Police and law enforcement responded quickly and efficiently. I always had a fear of something like this happening to my school, I’m so thankful to be okay. pic.twitter.com/JJ4U6XU32j

That’s far more than we can say for the cowards in Broward County.

The Ocala shooting also coincided with a nationwide student walkout to protest gun violence on the 19th anniversary of the 1999 massacre at Colorado’s Columbine High School. The Ocala school planned its version of a walkout, students said.

Chris Oliver told the Ocala Star-Banner that his 16-year-old son, a Forest student, told him the shooting happened near his classroom. The boy told Oliver the shooter was standing in a hallway and fired at a closed classroom door. The shooter then dropped an unspecified weapon, ran and tried to hide, the boy told his father.

Bouche then appeared in court.  He faces charges including terrorism, aggravated assault with a firearm and possession of a firearm on school property.  A second court date has been set for May.

He told The Ocala-Star Banner that he felt an adrenaline rush before the shooting that quickly wore off, and he was unable to continue with his plan.

Apparently, Bouche had planned to carry out something much bigger than merely shooting at a door.

So, why isn’t the media all over this story?  Had you even heard about it?  Probably because no one was killed and the criminal was stopped by a school resource officer.

Just like Deputy First Class Blaine Gaskill who stopped a school shooter in Maryland in March, Long didn’t wait to respond but rushed to the scene to stop the crime.  That’s more than I can say for the cowards in Broward County, who, as we know have only found one student that they are willing to confront in a school, an unarmed, pro-Second Amendment student named Kyle Kashuv.

I’m not in favor of bigger government to solve the problem of school shootings, such as placing a police officer at every school, but am more for getting rid of gun free zonesand stop infringing on the rights of teachers and staff to carry their weapons on school property.  That would be less costly and promote greater freedom among the people.

However, in this case, I’m glad Deputy Long was successful in stopping Bouche in his tracks.  He should be congratulated and thanked.