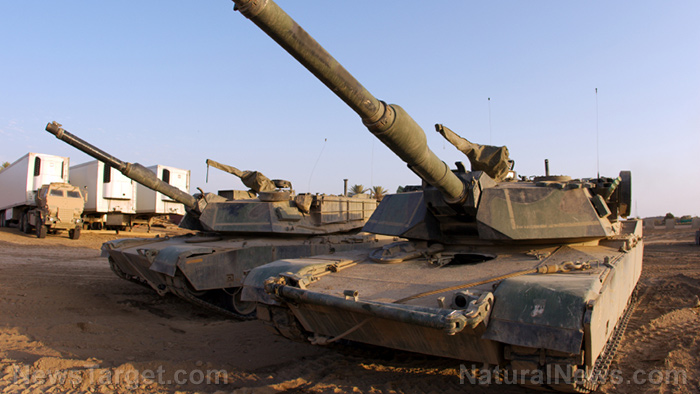 (Natural News) American foreign policy has long been characterized by a precedent of bombing and overthrowing countries that elected officials accuse of committing major human rights abuses. But the United States government has been guilty of many of these same acts of domestic terror over the years, which begs the question: Should other countries also be allowed to overthrow our government in order to protect American citizens from similar harm? (We ask this rhetorically, of course, and the answer is “no,” but the twisted logic persists among U.S. interests trying to justify bombing Syria.)

Shortly after the Syrian city of Douma was allegedly hit with a chemical weapons attack back in early April, President Donald Trump and many in the mainstream media quickly blamed the incident on Syrian President Bashar al-Assad. This was the pretext by which President Trump almost overnight made the decision to start lobbing bombs into Syria, despite a lack of credible evidence that President al-Assad was even the guilty party.

It’s a “shoot first, ask questions later” approach to dealing with alleged foreign threats, either real or manufactured, and it usually results in the U.S. becoming indefinitely entangled in the affairs of other countries – most often in the Middle East, and typically to the tune of tens of billions of dollars in military spending.

Remember with the FBI gassed and murdered 80 Americans in Waco, Texas?

But again, why is the American government never held similarly accountable? Take the infamous Waco, Texas, raid as a prominent example. The Federal Bureau of Investigation (FBI) sent tanks into a Central Texas compound occupied by dozens of people, many of whom were children. The FBI proceeded to blast the private property with CS gas, which left more than 80 men, women, and children dead in its wake.

This was an act of cold-blooded murder by our own government, and yet nobody was ever held liable for this egregious crime against humanity. The Feds had no business being at Waco in the first place, let alone making the decision to burn alive innocent children and babies with chemical weapons. And yet, again, justice was never served, and the guilty parties were let off the hook because our federal officials can do no wrong.

It’s one of the most horrific human rights abuses in American history – and one that many would argue was far worse than what allegedly occurred in Douma. If President Trump and the many other politicians calling for war against Syria are at all interested in being consistent in their convictions, they’d similarly call for countries like Russia to intervene whenever children are injured or killed by American domestic policies.

“When the FBI used CS gas, banned in 100 nations for use even in war, against men, women & children – where was the outrage by the media?” asks David Knight from InfoWars. “Did any nation bomb America for using chemical weapons? And 25 years later, mainstream media still focuses on the ‘heresy’ of David Koresh if they cover Waco at all. Do we still burn adults & children for heresy?”

“Mandatory” vaccination is chemical violence against children – should Russia bomb the CDC, then, according to twisted logic?

Or how about the continued destruction of children’s lives with “mandatory” vaccinations, which injure and kill tens of thousands of babies and infants every single year? Vaccines are a form of chemical violence that is far more destructive than alleged isolated chemical gas attacks in the Middle East, so does that mean, by the same twisted logic, that Russia should get involved by bombing the headquarters of the U.S. Centers for Disease Control and Prevention (CDC) in Atlanta, Georgia? Of course not, but this would be consistent with those supporting the U.S. bombing of Syria.

It’s only fair for there to be one standard in dealing with chemical violence of any type, no matter who’s committing it. This would necessitate the American government also be held to account for harming American citizens – whether it’s done overtly with tanks and chemical gas, or covertly with “public health” initiatives like forced vaccinations loaded with harmful chemicals like monosodium glutamate, aluminum salts, thimerosal, formaldehyde and other ingredients the CDC admits are still found in vaccines.