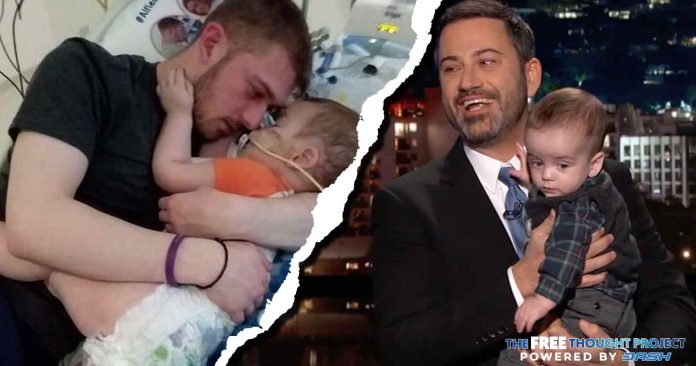 A 23-month-old baby boy has died after he was held hostage by the British government against the wishes of his parents who may have been able to save his life. The denial of medical care to baby Alfie—which was being offered to him for free by doctors in Italy—happened, not out of some vile conspiracy to harm a child, but as a function of the British healthcare system.

“My gladiator lay down his shield and gained his wings at 02:30. I love you my guy,” Tom Evans, Alfie’s father wrote on his Facebook page Saturday.

“Our baby boy grew his wings tonight at 2:30 am,” his mother Kate wrote. “We are heart broken. Thank you everyone for all your support.”

Alfie’s life began as a struggle and the toddler had been in a hospital since December of 2016 because of a rare degenerative neurological disorder. This year, the Alder Hey Children’s Hospital, run by bureaucrats who are apparently more interested in saving money than saving lives, decided that Alfie’s life was no longer worth saving.

The Vatican hospital in Rome offered free medical care, with experimental treatments that are not offered in the UK, which could’ve saved Alfie’s life, and came at no expense to the UK government. However, the bureaucrats ruled that “all medical experts agreed that further treatment was futile and that it would be against Alfie’s best interests to travel to Italy.”

Alfie’s father had been attempting to appeal these rulings so the family could seek this treatment. But despite the fact that this would have come at no cost to the UK government or the hospital, they forced the family to stay in the UK.

In Britain, you can fly your loved one to Switzerland to end their life. But if you try to fly your son to Italy to preserve his, the police will literally hold him hostage till he dies.

Alfie was denied food by his “caregivers” at the hospital and his life came to a tragic and potentially preventable end this week as he was starved to death by the state. And, in spite of multiple protests from governments and political figures from around the world—including the Pope—no one will be held accountable because Alfie’s death was a function of the state.

“When we give the government the power to make medical decisions for us, we, in essence, accept that the state owns our bodies,” former Congressman Ron Paul once said. In their decision to refuse the parents the opportunity to treat their child as they wished, the British government made its point that it owns the bodies of its citizens.

But Alfie was sick and was going to die anyway, many people will claim. However, it should have been up to his parents—not the government—to decide Alfie’s fate.

Had Alfie been able to leave, as the case of Ashya King illustrates, he may be alive today. King, whose cancerous brain tumor earned him a similar death sentence, fled the U.K. with his parents and sought treatment, ultimately in the Czech Republic. Today, he’s cancer free.

Unfortunately, this system that effectively sentenced a baby to die is championed by many who claim that government should be in charge of medicine.

For example, talk show host, Jimmy Kimmel delivered an emotional monologue last year about his new son, who was born with severe heart defects requiring emergency surgery. At the end of it, he urged Americans to support the Affordable Care Act. This speech was picked up by media everywhere and repeatedly covered to push for the ACA.

However, this is false. If parents have health insurance, their child would be covered. Also, the term “pre-existing condition” is used to describe uninsured chronically ill people who apply for insurance coverage, not for a child in need of immediate care like Kimmel’s son. What’s more, hospitals in the United States are legally obligated to provide emergency care to all patients—regardless of insurance status.

Kimmel then wrapped up his monologue stating, “If your baby is going to die and it doesn’t have to, it shouldn’t matter how much money you make.”

Indeed, it should not matter, but it also should not matter what the state tells you to do in regards to saving your baby’s life. And, the very system Kimmel proposed that night as he shilled for the ACA—which is a direct giveaway to big insurance companies (but another topic altogether)—is what forced a baby to die, even though he didn’t have to.

Where is Jimmy Kimmel now?

America’s health system is far from perfect. But for now, at least, babies are allowed to receive any treatment their parents wish, up to and including being able to leave the country and receive free care from the Vatican.