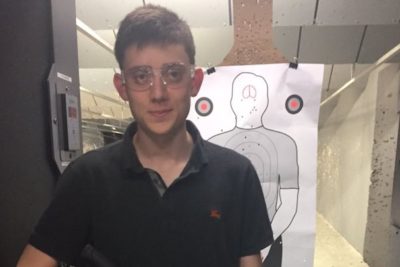 Kyle Kashuv said: “I find it utterly vile that he’d call a Jew the next Hitler. It’s also quite telling that he doesn’t know that Hitler took the people’s weaponry and I want more law-abiding citizens to have firearms.”

Kashuv is right. The left is unhinged, and it is clear that Marjory Stoneman Douglas High School, like colleges and universities all over the country, as well as most other high schools, is no longer a center of learning, but merely an indoctrination center for the hard left. After what happened there, for teachers to be defaming Jewish students and calling for a disarmed populace is monstrous. Gregory Pittman and the school administrators owe Kyle Kashuv an apology. But will he get one? That’s doubtful.

A Parkland, Fla., history teacher allegedly called a pro-Second Amendment Jewish student “the Hitler type” and “dangerous,” according to a Friday report.

“I find it utterly vile that he’d call a Jew the next Hitler,” Kashuv told Fox. The student’s family moved from Israel to the U.S. in the 1990s. “It’s also quite telling that he doesn’t know that Hitler took the people’s weaponry and I want more law-abiding citizens to have firearms.”

Pittman allegedly made the comments during a class in which Kashuv was not enrolled. At least three students told the junior that the teacher said he was the “next Hitler,” according to the Sun Sentinel. The Twitter dispute precipitating the alleged remarks started when Kashuv posted a video and photo documenting his first gun shooting experience with his father, an Israel Defense Forces vet.

Security officers questioned Kashuv about with whom he visited the gun range and what weapons he used. One officer allegedly said, “Don’t get snappy with me, do you not remember what happened here a few months ago?”…