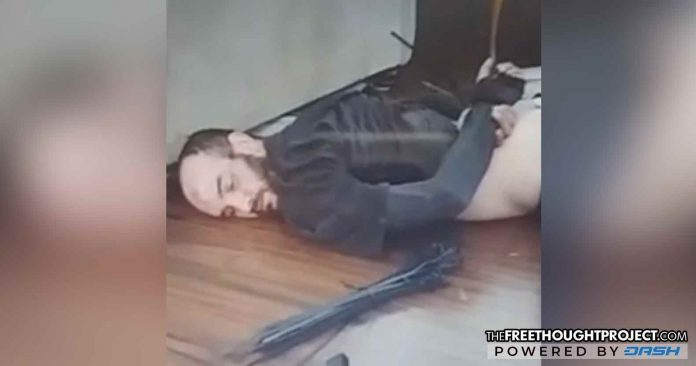 Port Alberni, CA — The parents of a 13-year-old girl, who was being harassed by an older man, are now facing criminal charges after they decided to take matters into their own hands after the police refused to help them track down the predator.

According to a report from CTV News, the parents begged the Port Alberni Royal Canadian Mounted Police (RCMP) to determine the identity of the man who was texting their daughter. After weeks of apparent frustration, the determined couple then lured the man to their home, all the while pretending to be the daughter desiring to have sex with him.

After the couple found out that the man who was sexting their daughter was a family friend, they apprehended him, zip-tied him, and then broadcast the predator snatch on Facebook.

Streaming the video live, the mother can be heard decrying the man’s presence in her home. The 28-year-old man can be seen lying face down on the floor, speechless, as the ordeal unfolded. The mother said:

“He came to my house to meet my 13-year-old f****n’ daughter to f**k her…He wanted to be her first. We f****n’ tackled him and zap-strapped him and called the police…Why wouldn’t the police come and help me catch this predator that just came to my f****n’ house?”

The mother then identified the man as her husband’s best friend’s younger brother. The family called the police to report that they had finally identified and apprehended the man who was obsessed with their daughter. But after Alberni RCMP arrived, instead of arresting the man who was allegedly attempting to have sex with a teenager, they arrested the couple for assault.

One of the mounties can be heard lamenting the fact the couple was being arrested. “You’re all being detained for assault right now, I’m sorry,” he said.

Confused, once again, over why the RCMP did not intervene in the apprehension and miffed as to why she was being arrested, the mother said in a live-streamed video,

“I’m arrested because we caught a predator that the police refused to catch.”

In an interview with CTV, the mother explained her actions, giving an indication as to precisely how the apprehension took place. She said she was told by police to ignore the unidentified man’s advance and block his number, which is something she could’ve done. However, this wouldn’t prevent any predator from pursuing a victim in real life. So, instead of heeding the advice of police, the angry mother decided to take matters into her own hands.

“I went to the cops and asked to come with me for this meet and they told me to block him and ignore it, and I came home and said yes to the meet(ing),” she said.

The parents invited the man over using the lure of sex. Like a scene from the television series “To Catch a Predator,” the mother waited in her daughter’s room while the man let himself in the house.

She immediately recognized the man as someone she knew, and then her motherly impulses seemed to instinctively take over. After realizing the pedophile call was a trap, he reportedly said “Oh my god!” and that’s when the mother said she “punched him in the face.”

Predictably, instead of giving the mother an award for identifying the man who was undoubtedly attempting to rape her teenage daughter, the authorities are now considering charging her. Could the decision to charge her be a reaction to being embarrassed publicly for not doing their jobs? The mother seems to think so. She said if they had believed her and taken action instead of waiting for a crime to occur first, the entire ordeal could have been handled differently.

“If they would’ve come with me they could’ve prevented it all, and if I get charged I still feel I did the right thing,” she said.

Validating the common belief that criminals have more rights than law-abiding citizens, Port Alberni RCMP Inspector Brian Hunter issued the following statement, which one could say vilified the family and made a victim out of the 28-year-old man police claim was “lured” to the residence. The statement reads in part:

“While the investigation remains active and ongoing, we are mindful that the inability to release all of the information known to date has likely contributed to concerns…We can confirm that our investigation includes that the male was allegedly lured to the home and was met by three adults. There were no children there when he arrived.”

The video, the arrest, and the incident raised serious questions about whether or not police are actually engaged in proactive policing or reactive law enforcement. Watch the video and decide for yourself, based on the facts, whether or not the mother or the police did the right thing.

The 28-year-old man has still not been charged, yet the family faces assault and forcible confinement criminal charges that could put them away for years. This is one of the sickest reactions by police we may see all year. So much for ‘if you see something say something!’