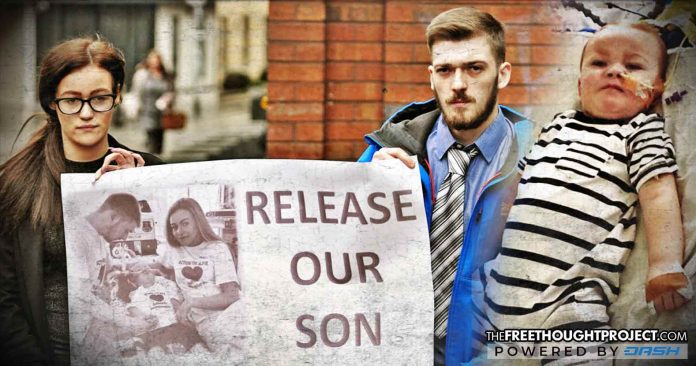 The case of Alfie Evans, the 23-month-old boy who died after the UK government ordered doctors to withdraw life support, is a reminder that not only does universal healthcare come with dangerous consequences, but that if it was Alfie’s parents—and not the government—who ordered their son to be deprived of food and water until he died, they would be arrested and charged with child abuse.

Alfie was born with a rare degenerative neurological condition that left him in a semi-vegetative state, and his parents initially took him to Alder Hey Children’s Hospital because he was suffering from seizures. Doctors determined that keeping Alfie on life support would not be “in his best interest” in December 2017, and his parents fought back, which resulted in a fierce legal over the course of the next few months.

Alfie’s parents begged for the right to take him to Italy to pursue extended treatment, and his case was ruled against by the high court in London, denied by the Supreme Court and ultimately rejected by the European Court of Human Rights on March 28.

After Justice Hayden with the high court in London endorsed an end-of-life care plan for Alfie on April 11, Alfie’s father flew to Rome to meet with Pope Francis on April 18. The Pope spoke was vocal about his support for Alfie’s continued treatment and he said that he was renewing his “appeal that the suffering of his parents may be heard and that their desire to seek new forms of treatment may be granted.”

Moved by the prayers and immense solidarity shown little Alfie Evans, I renew my appeal that the suffering of his parents may be heard and that their desire to seek new forms of treatment may be granted.

Alfie was granted Italian citizenship on April 23, in an attempt to legally transfer him to Italy for extended treatment. The Italian ministry of foreign affairs released a statement saying, “The Italian government hopes that in this way, being an Italian citizen will enable the immediate transfer of the child to Italy.”

But it was too late. Doctors withdrew Alfie’s life support on the same day, and he survived on his own without food and water for more than four days before he died on April 28, just 11 days before his 2nd birthday.

Many of the critics who look at Alfie’s case argue that he was “as good as dead,” and that the trip to Italy for more treatment could have killed him. While they may have a point, there is a much bigger factor at play in this story.

When the courts in the UK determined that there was no point in continuing to keep Alfie alive, they took away any rights his parents had to attempt to save his life, and they assumed control over whether he lived or died.

The United States is often criticized because it is the “only highly developed country in the world without universal healthcare,” and critics insist that state-run healthcare is necessary to save the lives of babies. But what many do not realize is that when socialized medicine is implemented, it gives the government omnipotent control over the health of its citizens, and the ability to decide whether they live or die.

Not only did the government make it illegal for Alfie’s parents to attempt to provide life-saving treatment for their son, but police in the UK also threatened to arrest citizens who criticized the case on social media—serving as a reminder of why it is so incredibly important for Americans to defend their First and the Second Amendment rights.

If parents refused to seek out life-saving medical care for their children, and if they then went on to deprive their children of food, water, and oxygen until they died, they would be charged with child abuse. But when the government does it, it is called health care.

Alfie Evans is just one example of the many children who are denied treatment that could save their lives—not because their government doesn’t have universal healthcare, but because it does and it has decided that their lives are not worth it, and their parents have no rights.