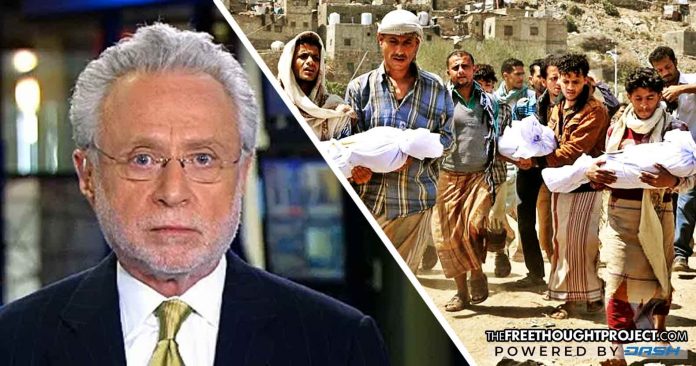 The current conflict in Yemen, which was manufactured as a proxy war by Saudi Arabia, targeting its bitter enemy, Iran, is America’s dirty little secret which the media refuses to question. According to an analysis from Unicef, more than 5,000 children have been slaughtered in the war, with the death toll from violence alone surpassing 10,000—as millions teeter on the brink of starvation. The number of casualties has only continued to increase, as a report from the United Nations noted that the parties involved are conducting operations “heedless of their impact on civilians.”

As The Free Thought Project has reported, the current situation in Yemen is nothing short of genocide, as there are 7 million civilians in starvation, and 19 million out of the country’s 27 million population “in need of some form of aid.” Saudi Arabia has repeatedly facilitated famine, continued to murder children, and all of it is with the help and approval of the United States.

Just last week, TFTP reported on a bombing that took place at a wedding near Yemen’s capital city of Sana’a. A report from the Associated Press which barely registered as a blip in the rest of the media claimed that the majority of people who were killed were “women and children who were gathered in one of the tents set up for the wedding party in the district of Bani Qayis.”

The bride was killed and the groom was one of more than 50 people who was wounded. Ali Nasser al-Azib, deputy head of the hospital, told the AP that at least 30 children were among the injured—several are suffering from shrapnel wounds and severed limbs, and are in critical condition.

As Glenn Greenwald pointed out last week, this most recent slaughter of innocent women and children comes after Saudi Crown Prince Mohammed bin Salman went on a publicity tour across the United States, meeting with elites from all sides of the political spectrum and industry.

As the Yemen war enters its fourth year of being ignored by the media, RT’s In the Now has republished a forgotten clip from 2016 in which CNN’s Wolf Blitzer interviews Rand Paul. The clip is nothing short of chilling and explains why the media and politicians continue to ignore the war, while silently supporting it—the slaughter of innocent children is good for business.

As the clip begins, Rand Paul is explaining that “There are now millions of displaced people in Yemen. They’re refugees. So we supply the Saudis with arms, they create havoc and refugees in Yemen. Then what’s the answer? Then we’re going to take the Yemeni refugees in the United States? Maybe we ought to quit arming both sides of this war.”

To give specific details of the US involvement in the slaughter of children, Paul noted, “We are refueling the Saudi bombers that are dropping the bombs. It is said that thousands of civilians have died in Yemen because of this.”

CNN’s Blitzer responded, “So for you this is a moral issue. Because you know, there’s a lot of jobs at stake. Certainly if a lot of these defense contractors stop selling war planes, other sophisticated equipment to Saudi Arabia, there’s going to be a significant loss of jobs, of revenue here in the United States. That’s secondary from your standpoint?”

Paul countered, “Well not only is it a moral question, its a constitutional question.” He then noted that it was Obama who partnered with Saudi Arabia to wage war on Yemen without Congressional approval. “Our founding fathers very directly and specifically did not give the president the power to go to war. They gave it to Congress. So Congress needs to step up and this is what I’m doing.”

CNN's Wolf Blitzer on the Saudi slaughter in Yemen.
How is this guy still on the air?! pic.twitter.com/f6Z9Q9gYCY

Since this original report aired, the admitted scope of the US role in Yemen has become far greater than just bombs and refueling. The Defense Department released a statement in December 2017, in which it admitted for the first time that U.S. forces have conducted “multiple ground operations and more than 120 strikes this year” in Yemen.

Sadly, this slaughter shows no signs of slowing and is arguably getting worse.

Only a few weeks into his presidency, Donald Trump made clear his policy of continuing the annihilation and genocide of the citizens of Yemen. Following in Barack Obama’s footsteps, Trump launched an attack on Yemen only days after taking office which led to the death of multiple civilians, including women and children.

This is the 8-year-old girl killed in US raid in Yemen, Arabic media reports https://t.co/nPlWh6LqE3
US killed her teen American brother too pic.twitter.com/QP0TsgdIfq

Nawar’s death epitomizes the rapacious and savage nature of the US presence in Yemen and their continued aid to the terrorist nation of Saudi Arabia who indiscriminately bombs schools, hospitals, and civilian neighborhoods within the nation.

And all of it, according to CNN and the rest of the military industrial complex—is good for business.