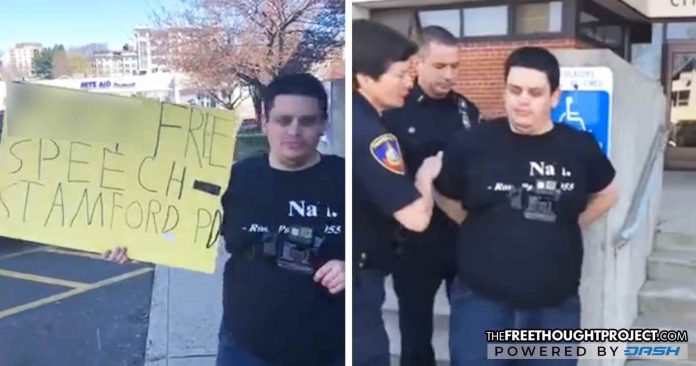 Stamford, CT — Free speech and liberty activist, Michael Picard had harmed no one, had not committed a crime, and was merely expressing his right to free speech by claiming the Stamford PD dislikes free speech. Indeed, within just a few minutes, the chief of police himself came out to prove Picard right.

Last Thursday, Picard held a sign that said, “F*ck Free Speech —Stamford PD,” merely attempting to point out the gross violations of the First Amendment committed by the department after they arrested another activist, Michael Friend, for holding up a different sign warning drivers of a distracted driving checkpoint ahead.

Friend was appearing before a judge last week after being charged with allegedly interfering in police duties by warning drivers of a checkpoint ahead. Because Friend was arrested for merely expressing his free speech by holding up a sign that said “Cops Ahead” to warn drivers, Picard went to the courthouse to voice his concern.

Picard had on his GoPro camera which filmed the entire interaction, however, police confiscated it as evidence after his arrest. Luckily, Picard’s friend, Dawud Talib was also at the courthouse to film the interaction.

After a few minutes in front of the courthouse, Picard was confronted by Police Chief Jon Fontneau, who warned the free speech activist to stop expressing himself, or go to jail.

Picard, knowing he was well within his rights to hold this sign up in front of a courthouse, refused. In response to Picard’s refusal to censor himself, Fontneau had him arrested and handcuffed. Picard was subsequently charged with breach of peace.

“I found the sign to be offensive in front of police headquarters as people are coming in and out,” Fontneau said. “I don’t think our day-to-day residents should have to put up with something like that.”

That decision, however, it not up to Fontneau. Indeed, this precedent has already been established in the United States Supreme Court case, Cohen v. California. The Court overturned a man’s conviction for the “crime” of disturbing the peace for wearing a jacket in the courthouse that displayed the phrase, “F*ck the Draft.”

Picard could not comment specifically on the case, however, he did note that “They have a checkpoint for everything nowadays,” adding, “They can’t stop infringing on your rights.”

TFTP spoke with Picard’s attorney, Joseph R. Sastre who explained how unjust this charge against his client is.

“A person is guilty of breach of the peace in the second degree when, with intent to cause inconvenience, annoyance or alarm, or recklessly creating a risk thereof, such person: (1) Engages in fighting or in violent, tumultuous or threatening behavior in a public place; or (2) assaults or strikes another; or (3) threatens to commit any crime against another person or such other person’s property; or (4) publicly exhibits, distributes, posts up or advertises any offensive, indecent or abusive matter concerning any person; or (5) in a public place, uses abusive or obscene language or makes an obscene gesture; or (6) creates a public and hazardous or physically offensive condition by any act which such person is not licensed or privileged to do. For purposes of this section, “public place” means any area that is used or held out for use by the public whether owned or operated by public or private interests.”

“I think the first sentence says it all,” Sastre told TFTP. “A person is acting like a mere fool when he sets out with intent to cause inconvenience, annoyance or alarm. Charging protesters with this statute section, or another like it, sends a message that the police don’t think you have an opinion on anything. No, to them, a guy holding a sign is just an attention seeker, out to make a spectacle of himself. It is the equivalent of the abusive husband who tells his wife to ‘stop acting so hysterical’ when she tries to get him to consider her feelings, or to treat her better.”

For those who follow TFTP closely, you’ve probably seen our reports on Picard before, which is why the police department may have it out for him.

In 2015, Picard was also arrested for his free speech. This time, however, police confiscated his phone and then proceeded to record themselves trying to fabricate ways to charge this innocent man.

“To me, Michael Picard’s case, and Michael Friend’s for that matter, makes it clear that the Stamford Police Department needs new leadership.” Sastre noted. “But what is even more distressing to me about this case is that the Stamford Police seem to have reached out to a prosecutor in the courthouse to ask how to deal with a man holding a sign, and that the prosecutor suggested that he be arrested. Proving once again that freedom of speech really only means that you have the right to say, as loudly as you want, that you agree with the police state.”

If you’d like to peacefully voice your concern about the video below, you can do so at the Stamform police Facebook page here.