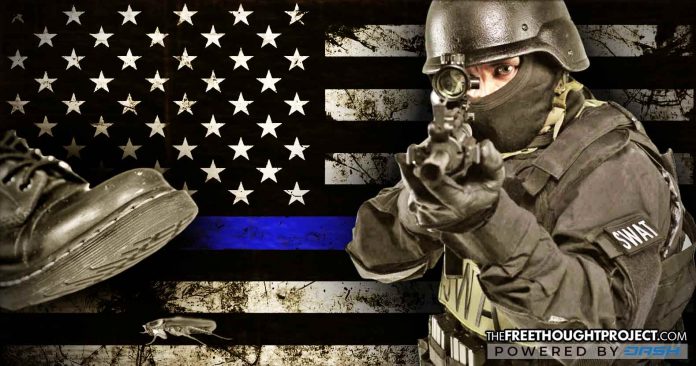 It takes at least four years of college for an enlisted person in the military to become a military “officer,” which is quite a contrast from the mere nine months it takes for a police officer to earn the title. But according to a group of 10 former Austin Police Department recruits who wanted to become peace officers, just like the military, the Austin PD is training  “warriors” instead of “guardians.”

The former recruits are now blowing the whistle and claiming that the type of mentality they encountered is not what they signed up for and is not representative of the greater Austin community. KVUE writes:

Summer Spisak, a 38-year-old former tech employee who participated in nine weeks of the eight-month academy last year, said instructors told her and other cadets they would “punch them in the face” if they said they wanted to be police officers to help people.

Spisak and others are now sounding the alarm for the public, saying police are being trained to view community members as the enemy and not as their fellow citizens. “It’s so different from what is portrayed…It’s so different from my expectation of the Austin Police Department,” Spisak concluded.

KVUE continued by describing another former recruit’s observations of the police training currently being implemented at the Austin PD:

Jonathan Murray, who now works in sales for Dell, said instructors repeatedly degraded the homeless and prostitutes, referring to them as “cockroaches” and suggesting they “find a transient” if they were bored and wanted a felony arrest.

Viewing sex workers as insects and the homeless as potential targets for prosecution differs vastly from the generalized public perception of officers as those who are sworn to “protect and serve” members of the community. According to the former recruits, officers of the peace should have a “guardian” mentality as opposed to the “warrior” mindset the recruits and graduates are being taught to possess.

Both Spisak and Murray joined eight others who voiced their concerns in a letter to two different news agencies. Their objections were met, predictably, with denial by Austin’s Chief of Police, Brian Manley, who claims his cadets are trained to be both guardians and warriors.

We train our officers at the Austin Police Department to be guardians, but to have the ability in the moment to become a warrior when it is necessary…Law enforcement is a profession where you have situations where you have to go in and use force to protect yourself or the community, but the vast majority of the work we do requires that guardian mindset—that guardian training.

Part of the motivation, it seems, to train police to be warriors comes from the false perception that there is a war raging against law enforcement. There are absolutely zero statistics to support the claim that there is a “War on Cops” at work on the streets of America.

While there are less than 75 officers who are killed by bad guys with guns each year, more officer deaths are attributed to suicides than homicide and vehicle accidents—combined. Therefore, there is hardly any justification to train police to become warriors, critics would likely contend. Instead, responsible academy training should understandably focus more on preventing suicides and depression than learning the public is the enemy to be referred to as cockroaches.

Much of the criticism involving police officer training undoubtedly comes from the teachings of Ret. Lt. Col. Dave Grossman, as The Free Thought Project has reported. His lectures on “Killology” are routinely given to law enforcement leaders throughout the country. If any single police officer trainer can be credited with promulgating the “warrior” mindset throughout the nation’s law enforcement agencies, it is Grossman, through his instruction and speaking engagements.

Josh Eels of the Men’s Journal had an opportunity to attend one of Grossman’s lectures and interview the controversial police trainer. Eels said Grossman grossly exaggerated the notion that police are engaged in a war on the streets of the United States. Claiming, like other national leaders have done, the streets of America are more dangerous than they have ever been, Grossman encourages recruits to study how to kill and when to kill.

But his facts are simply false. Not only is violent crime lower than it was in the 60s, 70s, and 80s, but fewer police officers are being killed now, compared to the days of alcohol prohibition. Eels writes:

Over the past two years, he has spoken to more than 100 departments around the country. There’s probably no one in America who trains more cops; there’s almost certainly no one who trains cops who is better known.

Grossman and all he represents, in the eyes of many, is precisely what is wrong with police academy training today. Police officers number almost one million strong in the U.S., yet the pervasive view among many police officers—as well as their supporters—is as one unnamed military veteran told TFTP this week, the people they serve are “evil” and the work of law enforcement is “righteous.”

What the former recruits are disgusted with boils down to the “Us vs. Them” mentality whereby an officer’s loyalty is to the department and his fellow boys in blue, rather than protecting the interests of the public at large.

Amid all of the warrior, righteous war talk, there are a few police officers who are starting to wake up and unplug from the mindset and who are beginning to think for themselves. Officers are starting to realize the civil asset forfeiture schemes, ticket quotas, arrests for “resisting arrest,” and jailing individuals for being poor (because they cannot pay their fines) ultimately work against a free society and do not jive with what they thought they were signing up to become.

Now it seems even police officer recruits, at least in Austin, are quitting the program before being given the prestigious title of “officer” without rightfully earning it, all because they say the system is corrupt, abusive, and coercive.