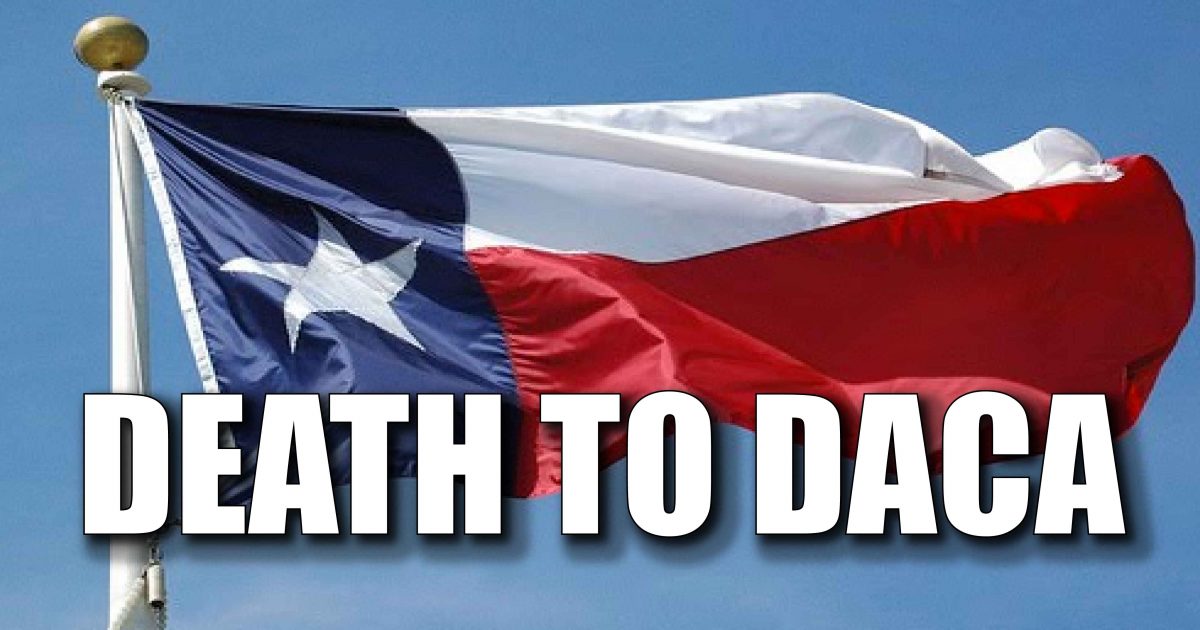 President Donald Trump blasted Barack Hussein Obama Soetoro Soebarkah over his illegal and unconstitutional Deferred Action for Childhood Arrivals (DACA) and rightly so.  However, since he has been in office, he has failed to rescind DACA and carried on under the previous administration’s policies.  This has now led to Texas and several other states filing suit against the administration over what they claim is an unconstitutional program to protect illegal aliens from being deported.

“DACA purported to grant lawful presence and work permits to nearly one million unlawfully present aliens without congressional approval,” Paxton added.  “In fact, DACA was an attempt by President Obama to enact a law that Congress had repeatedly rejected. Our coalition is urging the U.S. District Court for the Southern District of Texas to declare DACA unconstitutional and stop the federal government from issuing or renewing any DACA permits in the future.”

The coalition of states that are joining Texas are Alabama, Arkansas, Louisiana, Nebraska, South Carolina and West Virginia.

Paxton went on to say, “Last September, President Trump sided with the rule of law. He agreed to phase out DACA after I led a coalition requesting his administration do so or face a court challenge. Since then, three activist federal judges have blocked the federal government from cancelling DACA. That means that unelected federal judges are forcing the Trump administration to leave an unlawful program in place indefinitely as legal challenges drag on.”

“The multi-state coalition lawsuit we filed today is about the rule of law, not the wisdom of any particular immigration policy,” Paxton continued.  “The Constitution guarantees the American people the right to set their own immigration policies through their representatives in Congress. The federal executive branch lacks the power to unilaterally grant unlawfully present aliens lawful presence and work authorization.”

And this is where the real rub is.  The Executive Branch is simply to enforce the current immigration laws, not change policies to keep from enforcing it.  If Obama was unconstitutional in his DACA policies, and he was, then there should be no reason for President Trump to ignore those policies and even ignore a federal court’s ruling and simply enforce the law.

“Left intact, DACA sets a dangerous precedent by giving the executive branch sweeping authority to ignore the laws enacted by Congress and change our nation’s immigration laws to suit a president’s own policy preferences,” he said.  “The danger DACA poses goes far beyond its consequences for our immigration system.  It invites future presidents to ignore the law, ignore the will of the people, and set their own policies on the Second Amendment, privacy rights, drug laws, or any of the other important issues debated in Congress.”

The Texas Attorney General then encouraged Trump to do his duty under the Constitution, a duty he swore an oath to perform.

“President Trump has a duty under the Constitution to take care that the law be faithfully executed,” Paxton added.  “Activist judges should not stand in the way of the president fulfilling his constitutional duty. DACA encourages lawlessness within the federal government and at our borders. Legally, DACA is similar to the executive amnesty program known as DAPA. The courts blocked DAPA after I led another state coalition challenging its constitutionality all the way to the U.S. Supreme Court. Our coalition is confident that ultimately, through our federal lawsuit, DACA will meet the same fate as DAPA.”

If only we had people representing us who knew and understood the Constitution and the limitations it fixes upon each branch of government and the authorities given to each branch and acts accordingly.  It’s a crying shame when the states have to go through this mess to get the federal beast to do what it was designed to do.  If this is what we have to do constantly, and we do at the expense of the citizens of the states, then we would almost be better off without a federal government.  In fact, it seems preferable.

Read the lawsuit below.