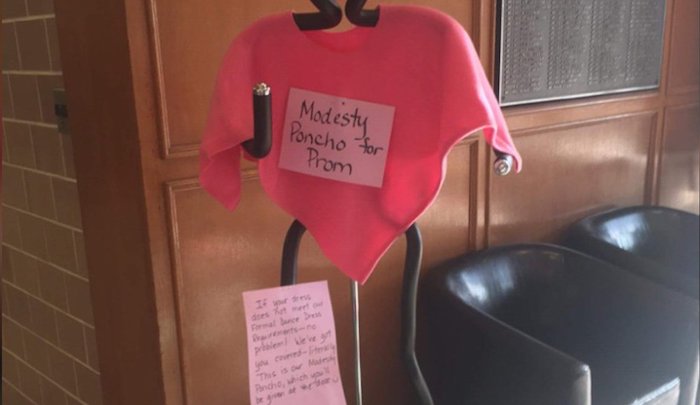 There are lots of Catholic schools and lots of proms, but only in Dearborn do we get the “modesty poncho.” Might this have something to do with the fact that this is in Dearborn, where there are a large number of Muslim students and increasing influence of Islam? Will “modesty hijabs” be next? With public schools increasingly opening prayer rooms for Muslim students and presenting a rosy and whitewashed picture of Islam to students, don’t be surprised.

One high school in Dearborn, Michigan has found a way to deter inappropriate prom dresses: the “modesty poncho.”

In the halls of Catholic high school Divine Child were colorful ponchos hanging on mannequins with attached signs that said “modesty poncho for prom” and reminders to students to dress appropriately for the upcoming event.

“If your dress does not meet our formal dance dress requirements ― no problem! We’ve got you covered ― literally. This is our Modesty Poncho, which you’ll be given at the door,” reads one note attached to a mannequin. “Available in short and long styles,” says another.

The “modesty poncho” was a “lighthearted” attempt to get students to focus on “inner beauty,” said theology teacher Mary Pat O’Malley, who created the ponchos.

“We are trying to focus on the inner beauty of people and not draw attention to something that doesn’t really need to have attention drawn to it,” she said. “It’s really intended as a deterrent — and a lighthearted one at that.”

The school quickly and unsurprisingly received backlash over the “shaming” ponchos, forcing administration to put out a letter home to parents offering clarification.

On Tuesday, Principal Eric Haley alerted Divine Child families that the ponchos would not be used during prom, but were merely meant “to remind all students and parents of our formal Prom dress policy.”

“To be clear: The poncho will not be passed out at Prom. It was on display to proactively remind students of our dress code policies and eliminate any confusion prior to this special event,” he wrote. “We recognize that it has done the opposite for some members of our community and draws away from our goal of having students adhere to the dress code policy.”

One unnamed student told Fox 2 Detroit that the ponchos were indeed a serious threat.

“If the teacher deems that your dress is inappropriate, you will be given a poncho at the door,” she claimed, adding, “I would refuse the poncho.”

“It’s a method of shaming, a method of building and degrading to females and its interpretation what’s modest and what isn’t,” said an anonymous parent, outraged over the ponchos….