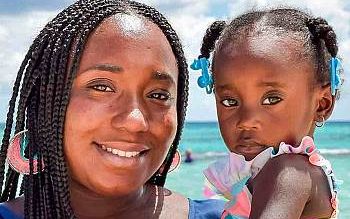 Siwatu-Salama Ra is a 26-year-old mother who will give birth in prison after using a legally purchased handgun to scare off an assailant.  Ra’s daughter was in the car when the neighbor began ramming it with her vehicle.

Ra was forced to watch in horror as the angry assailant (a neighbor with whom Ra had a dispute) deliberately crashed her vehicle into Ra’s car while Ra’s two-year-old daughter was playing inside. Ra removed her unloaded, legally purchased a handgun from the glove box and brandished it, scaring the neighbor off. But for that “crime,” Ra will give birth behind bars.

Channel Harvey, the neighbor who used her car as an assault weapon, was never charged, according to Reason. Ra was arrested for felonious assault and she is now serving a mandatory two-year-sentence, even though Michigan is a Stand Your Ground state and Ra was clearly defending her family on her own property.

Siwatu called her sister herself and found out from her sister that there was no permission given for this young lady to be at the family home that day visiting, and therefore Siwatu informed the young lady that she needed to call her mother to come back and pick her up….

And so, the mother arrived about 10 minutes later to pick the child up. She was very upset, irate even. She pulled back up to Siwatu’s family’s home. She started yelling, using profanity. She was very angry. She started demanding answers. “Why can’t my child be here? These girls have made up. Your niece has come to my home over the last two weeks. I don’t understand.” And she testified at trial that she thought she had a right to be on that property and to demand answers as to why her child was not welcome there. And that’s where this incident started.

Harvey refused to leave, according to Burton-Harris, and eventually drove her car into Ra’s, which was parked on the street with Ra’s two-year-old daughter inside it.  At that point, Ra, like any mother, feared for her child’s safety and did what mothers are known for: protected her child.

Harvey then used her cell phone to take a picture of Ra holding the gun and raced off to the police station, where she filed a police report. Ra also filed a report, but Detroit police consider the first person to file a report to be the victim in a dispute, even though, in this case, Harvey initiated the violence.

For her “crime” of not wanting her property rights violated and defending her vehicular property and her child’s life, Ra is behind bars and will give birth to a baby while in prison.