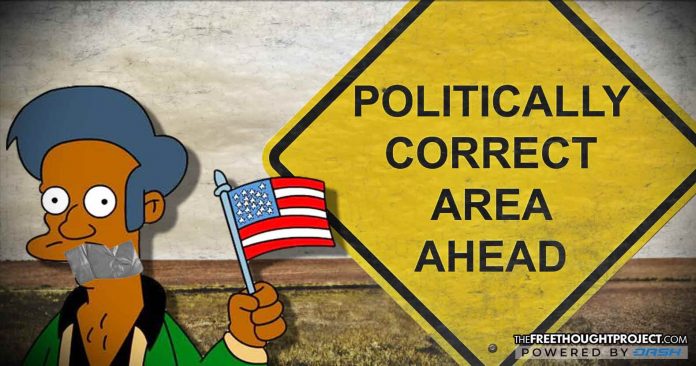 Simpsons creator Matt Groening knew he would stir up controversy when he decided to give life to show character “Apu Nahasapeemapetilon.” But maybe he had no idea how much, or didn’t care. Whatever his motivation for introducing the world to Apu, his character has predictably drawn the consternation of the politically correct police department.

But according to Groening, the outrage is fake news and those who take offense to the stereotypical Indian character are simply pretending to be offended. In a revealing interview with USA Today, Groening was asked if he had any comments about Apu being a stereotype of the Indian Community.

“Not really,” Groening responded. “I’m proud of what we do on the show. And I think it’s a time in our culture where people love to pretend they’re offended.”

One of those concerned citizens to whom Groening was likely referring is comedian Hari Kondabolu. Even though Kondabolu has made a living employing his self-deprecating humor, often making fun of his own Indian heritage, he decided to attempt to kill Apu by making a documentary. “The Problem With Apu,” as it is titled, attempts to reveal just how stereotypical, racist, and offensive Apu is to the Indian-American community.

TruTV’s documentary even assembled A-list actors to opine about how offensive Apu is to them. Those actors include Kal Penn, Whoopi Goldberg, and others.

Kondabolu readily admits Apu sounds like his father but seems more offended that long-time Simpson voice-over actor, Hank Azaria, a white man, was tapped as the voice of Apu.

None of that bothers Groening. And it really does not seem to bother Kondabolu, who is now making money off of attacking a fictitious animated character who looks and sounds like many Indian-Americans people encounter on a daily basis. In the end, Apu is simply funny, and a somewhat true to life persona as many people view him.

‘So what makes Apu so stereotypical?’ one might ask. For starters, Apu is a Kwik-E-Mart owner, not that he couldn’t have been, to fit the stereotype, a taxi cab driver, deli owner, doctor, or smoke shop owner.

His voice is choppy, quick, and slightly nasalized, which emphasizes a South Asian and until people created an issue out of it, millions of Americans—including those from India—found humor in it.

In the Youtube video below, Kondabolu spoke freely with Trevor Noah on The Daily Show and admitted, “I don’t really give a shit” about Apu. He revealed that the network, TruTV, wouldn’t like his comments.

Such an admission proves Groening’s point, one could say. The offense isn’t real and isn’t born out of something truly offensive. That is proof enough that Kondabolu is doing the critical documentary for the same reason Groening makes the Simpsons. It’s about the money, honey!

Kondabolu admitted that he had made fun of Indians relentlessly. “I milked it for as much as I could…about four or five years,” until he said, 9/11 happened. That is when he claims he changed. But he has not. He is still making money from pseudo-outrage over the Simpson’s character Apu and his White guy voice-over, Hank Azaria.

Co-writer/Executive Producer of the Simpsons, Dana Gould, simplified Apu’s character by telling Kondabolu why he is so funny. In a way, with his choice of words, Gould put to death any talk of Apu’s character as being an attempt by the show’s creators to be racist.

“There are accents that by their nature to white Americans, sound funny. Period,” Gould said.

Last week, Azaria was a guest on the Late Show with Stephen Colbert where he discussed Apu and his character. Azaria told Colbert the fact that anyone was bullied or teased by Apu’s character “makes me sad,” and he admitted that there is a lot of talk about what to do with Apu.

Azaria said he would be “perfectly willing to step aside” if, as he says, it was “the right thing to do.” He also said he would welcome South Asian writers or voice-overs into the studio. And that is precisely what the Simpsons critics want: Representation. They want a seat at the table. But it is unclear if Groening and Gould are willing to change the formula for their show’s success. After all, The Simpsons is the nation’s longest-running primetime scripted TV show.

There is a dangerous precedent being set in America right now, and it all stems from the act of being offended and the actions one takes to prevent future ‘offenses.’ It is important to note that the freedom of speech is under attack and it is a bipartisan effort. Many of those complicit in the quelling of free speech are merely useful idiots and have no idea they are participating in one of the most effective forms of censorship humanity has ever seen.

All people have to do to silence anyone with whom they disagree is to now claim their speech offended them.

Telling people what words they can and can’t say and how they can say them to ‘protect’ others is chilling and nothing short of tyrannical. Freedom of speech does not come with terms and conditions as words alone, less the obvious yelling “fire” in a movie theater, cannot cause physical harm.

The act of being offended is a choice taken by those who hear certain words. Limiting or changing language does nothing to stop someone from offending in another manner or being offended.

Before his death in 2008, George Carlin wrote a book titled, When Will Jesus Bring the Pork Chops?, in which he blasted everything from the dumbing down of America to the politically correct police.

In his book, Carlin explains how being politically correct is actually intolerance disguised as tolerance.