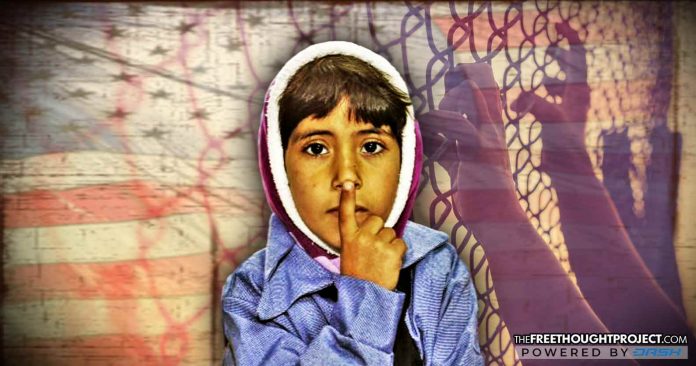 According to a Senate subcommittee testimony last week, nearly 1,500 immigrant children were lost in government arranged foster homes last year, with the suspicion that many of them were kidnapped by human traffickers.

During the hearing, Senator Heidi Heitkamp of North Dakota told child protection representatives with the Health and Human Services Department (HHS) that they were “the worst foster parents in the world.”

“You are the worst foster parents in the world. You don’t even know where they are. We are failing. I don’t think there is any doubt about it. And when we fail kids that makes me angry,” Heitkamp said.

Many of the children are still unaccounted for, but some of them who have been found were held captive by human traffickers in terrible conditions.

Subcommittee Chairman Senator Rob Portman said that an investigation into the lost children began after the HHS put eight children from Guatemala into the custody of human traffickers, who forced them to work on a farm for 12 hours a day without pay.

“It is intolerable that human trafficking — modern-day slavery — could occur in our own backyard. What makes the Marion cases even more alarming is that a U.S. government agency was responsible for delivering some of the victims into the hands of their abusers,” Portman said after learning of the case.

“Whatever your views on immigration policy, everyone can agree that the administration has a responsibility to ensure the safety of the migrant kids that have entered government custody until their immigration court date,” Portman said.

Since that incident came to light, HHS and The Department of Homeland Security (DHS) promised to check up on the unaccompanied immigrant children who passed through their care. After these checkups, it was revealed that many more children were slipping through the cracks than anyone anticipated.

Acting assistant secretary at HHS, Steven Wagner, told the committee that between October and December of 2017, HHS called 7,635 children that the agency placed with sponsors and they were only able to track down 6,075 of them. At least 28 of them had reportedly run away, five others were deported, 52 were living with someone else and 1,475 were missing.

The number of children in danger could be much larger, considering that since 2013, more than 180,000 unaccompanied immigrant children passed into America, and very few of them had family in the states who they could stay with, so many of them were placed in the care of random foster families who did not have to go through the same types of background checks and scrutiny that foster families usually do.

The agencies blame their neglect of these children on low budgets, but they seem to have billions to spend on fighting the drug war and creating a police state at the border.

Of those 180,000 children that were placed in new homes, it is hard to imagine how many are currently missing, since so many of the 7,635 children who were actually followed up on could not be found.

In 2016, an AP investigation found that more than two dozen children had been sent to homes where they were sexually assaulted, starved or forced to work for little or no pay.

Child welfare lawyers from Ohio who testified at the hearing said that increased persecution from immigration enforcers has made family members of unaccompanied children who enter the US afraid or unable to take custody.

One of these attorneys, Jessica A. Ramos, suggested that the children be appointed lawyers, in addition to having the opportunity to reunite with family members in the US without fear of deportation.

There have been similar concerns in Europe as well—in 2016, it was reported that more than 10,000 immigrant children may have disappeared after arriving in Europe over a two-year time period.

“It’s not unreasonable to say that we’re looking at 10,000-plus children. Not all of them will be criminally exploited; some might have been passed on to family members. We just don’t know where they are, what they’re doing or whom they are with,” Europol’s chief of staff told the Observer newspaper.

While it is possible that some of these children are intentionally staying under the radar because they fear deportation, there have been enough cases of human trafficking in these circumstances to show that this is a widespread problem.

Along with immigrants and refugees, Native Americans have an especially high risk of becoming victims of human traffickers. As The Free Thought Project reported last year, Native American women and children are disappearing from areas near oil fields, where thousands of workers from around the country live in “man camps.” Investigations have revealed human trafficking to be a factor in many of these instances, but police in native tribes do not have jurisdiction to arrest non-natives, making it difficult to prosecute the human traffickers who are preying on their community.

Sadly, whether they are immigrants, natives, orphans, or just poor, children who are in vulnerable positions become easy targets for predators, and they are often ignored by the law as well, since these are already groups who are not treated with the dignity that they deserve by the systems that they live under.