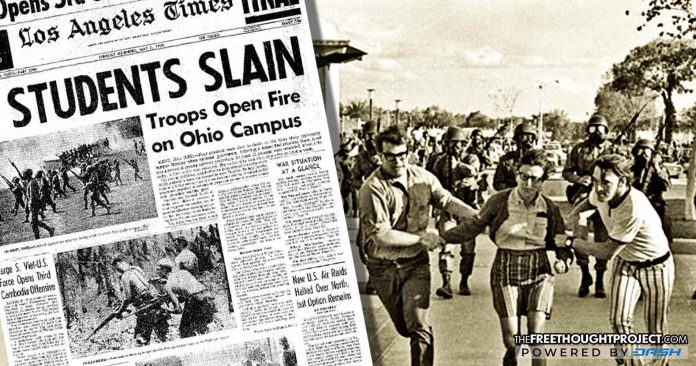 On May 4, 1970, members of the Ohio National Guard descended on the campus of Kent State University in Ohio to quash and antiwar protest. During the protest, soldiers opened fire on an unarmed group of students—firing 67 rounds in 13 seconds—killing four and injuring nine others. To this date, not a single person has been held accountable and the government still refuses to admit that it participated in the murder of its own citizens.

As the Free Thought Project reported in 2016, Kent State is the one school shooting that the US government wants you to forget.

It has been 48 years since that day and there has yet to be a credible and impartial investigation into the massacre. Also, no group or individual has faced a single consequence for opening fire on innocent students and killing them. Although eight of the National Guardsmen who opened fire that day were indicted by a grand jury, all of their charges were eventually dismissed.

The families of the victims were given $15,000, a statement of regret, and essentially told to get on with their lives.

For decades after the killings, the US government did their best to cover up the shooting. As an in depth explanation from Counter Punch points out, “the US government took complete control of the narrative in the press and ensuing lawsuits. Over the next ten years, authorities claimed there had not been a command-to-fire at Kent State, that the ONG had been under attack, and that their gunfire had been prompted by the “sound of sniper fire.” Instead of investigating Kent State, the American leadership obstructed justice, obscured accountability, tampered with evidence, and buried the truth. The result of these efforts has been a very complicated government cover-up that has remained intact for more than forty years.”

Not until 2010, after undeniable forensic evidence was dug up by independent and private researchers did the real truth of that day begin to surface.

Aurel Krause and Emily Kunstler founded the Kent State Truth Tribunal (KSTT), which helped to expose the sheer lies fed to the American public about what really happened that fateful day.

In spite of this overwhelming and indisputable evidence, in 2012, the US government, once again, refused to reopen the case. However, the truth still came out.

A crucial piece of the conspiracy was apparently uncovered in 2010 that played a pivotal role in exposing the crimes of the US government. Audio recordings were analyzed and subsequently found to record the Guardsmen being given orders to murder the protesters.

The Cleveland Plain Dealer reported on this revelation in 2010:

“Guard!” says a male voice on the recording, which two forensic audio experts enhanced and evaluated at the request of The Plain Dealer. Several seconds pass. Then, “All right, prepare to fire!”

“Get down!” someone shouts urgently, presumably in the crowd. Finally, “Guard! . . . ” followed two seconds later by a long, booming volley of gunshots. The entire spoken sequence lasts 17 seconds.

According to the reports, the review was done by Stuart Allen and Tom Owen, two nationally respected forensic audio experts with decades of experience working with government and law enforcement agencies and private clients to decipher recorded information.

Despite the troops’ claims of protesters throwing rocks at them, the shots were fired from 60 feet away. What’s more, as Allen and Owen point out, there is no audio indicating that the troops who opened fire were getting hit with rocks.

There is undeniable evidence, however, that the US government killed innocent civilians for protesting war and yet still, no one was held accountable and the government refuses to acknowledge it.

As Krause explains, “Kent State remains a glaring example of government impunity, it sends a message that protestors can be killed by the state for expressing their political beliefs. This lack of accountability and hostility towards peaceful expression flies in the face not only of our Constitution, but also our international human rights commitments.”

Indeed, the idea that one’s government can kill them for peaceful protest is chilling, which is why the establishment wants you to forget about it.

Below is a video of what oppression looks like. Americans would do well to remember this did not take place in some tyrannical other country, but right in their own backyard.