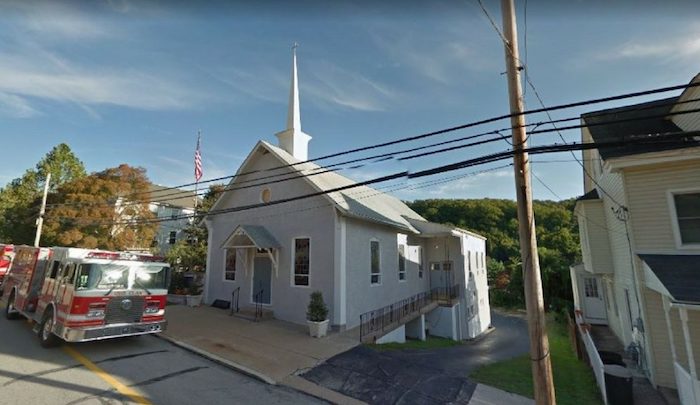 Recently a Muslim drove up to BlueStone Church in West Conshohocken, Pennsylvania, while a service was going on. He wasn’t there, however, to engage in interfaith dialogue. What he did there was a menacing glimpse of what is likely to become a common occurrence at churches across the country.

The front of the church is very close to the edge of the road, and while I spoke this evening about the sacrificial love of Jesus and how Jesus calls us to love one another with that same kind of sacrificial love, I noticed that a man pulled his car up to the entrance of the church and he sat there during the course of the message for over 35 minutes. At first, I assumed he was waiting to pick someone up from one of the nearby homes. Then I wondered if he was planning to attend the service, but wasn’t sure where to park. But soon it became clear that he wanted to hear the message from his car, so he parked in the fire lane outside the church and listened. It seemed a little curious to me, but didn’t immediately strike me as alarming.

As I was wrapping up the message, he began yelling into the building. I wasn’t sure what he was saying at first, so I stopped speaking and walked toward him so I could engage in conversation with him. It quickly became clear that he took great offense to what I was preaching about, and in the midst of yelling at me he stated, “You press on my nerves. You press on Muslims’ nerves. You’re going straight to Hell on the day of judgment.” Apparently, he was Muslim and he wanted to make sure that I knew he had a problem with the Christian message I was preaching….

As our towns and cities grow more diverse, they will be increasingly enriched by encounters such as this one. Celebrate diversity! Our diversity is our strength! This man only shouted; he didn’t pull out a knife or a gun and start murdering Infidels. He must be a “moderate.”

But his statements warrant closer scrutiny. How exactly did Stange “press on Muslims’ nerves”? He wasn’t preaching about Islam or Muslims. He was simply speaking about his Christian faith. But that was enough to set the Muslim intruders’ nerves on edge and lead him to begin shouting and fulminating about how everyone there was going to hell.

Meanwhile, this incident is illustrative. The third anniversary just passed of our Muhammad Art Exhibit and Cartoon Contest that was attacked by jihadis in Garland, Texas on May 3, 2015. In the wake of the attack, not a few Christians told me that I had done a terrible thing in co-organizing and speaking at the event. They claimed that Pamela Geller and I were gratuitously provoking Muslims, and brushed aside our response, which was that to bow to intimidation, in that case the threat of violence against those who drew Muhammad, would only encourage more intimidation.

Very well. But those Christians should take careful note of this incident. They thought that Pamela Geller and I were poking Muslims in the eye by holding our event in defense of the freedom of speech, and that we should have been more respectful. But the congregation of BlueStone Church in West Conshohocken, Pennsylvania wasn’t provoking Muslims at all, and still ended up being accused by an enraged Muslim of “press[ing] on Muslims’ nerves” anyway.

The lesson is clear: some Muslims consider any expression of the Christian faith (as well as any expression of other non-Muslim religions) as provoking to Muslims, as this Muslim did in Pennsylvania, and as an intolerable affront. So all the good Christians who castigated us for holding our free speech event in Garland should be consistent. If their intention is to avoid provoking Muslims at all costs, they should close down their churches now and convert to Islam. It would be the tolerant thing to do.

Robert Spencer is the director of Jihad Watch and author of the New York Times bestsellers The Politically Incorrect Guide to Islam (and the Crusades) and The Truth About Muhammad. His new book is Confessions of an Islamophobe. Follow him on Twitter here. Like him on Facebook here.