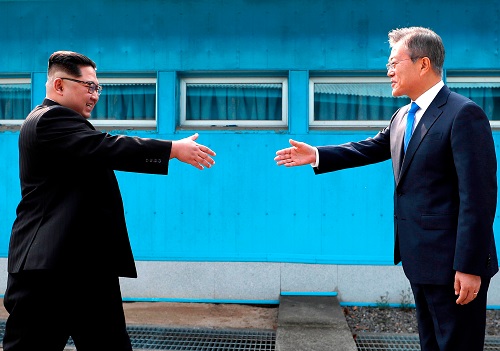 There is a saying in geopolitics that peace summits are generally a perfect time to prepare for war. This thinking stems from the military philosophy of Sun Tzu, who believed that when a nation is weak it is important to appear strong, and when a nation is at its most dangerous it is important to appear weak or “diplomatic.” Sun Tzu also often praised the virtues of distraction and sleight of hand, not only in war, but in politics as well.

I would note that Sun Tzu and the Eastern “sleight of hand” methodology is not only a mainstay of Chinese as well as North Korean thought, but also required reading for Western covert intelligence agencies. It is important to fully understand this methodology when examining the East vs. West paradigm, because almost everything you see and hear when it comes to relations with countries like China and North Korea is theater. Their governments have hidden schemes, our governments have hidden schemes and the globalists manipulating both sides have plans that trump everything else.

Keep all of this in mind when you hear about the sudden and almost inexplicable announcements of peace summits with North Korea in May or June between Pyongyang and the Trump administration.

Looking at the scenario purely from the perspective of political motive, it’s difficult to discern why Trump has been so obsessed with North Korea since he first entered office. North Korea has always had nuclear capability as well as the ability to deploy those nukes in one form or another against the U.S. North Korea has also always been involved in further nuclear testing and missile testing. The idea that such testing today is somehow a “violation” of arbitrary international standards and etiquette is absurd. Almost every nation in the world is engaged in military expansion and development.

Then again, if one only looks at surface rhetoric and policy, it is difficult to discern why the Trump White House is equally obsessed with Syria and the Assad regime. One of the primary driving forces behind the Trump election campaign was the idea that this was a candidate that would break from establishment elites in the tradition of perpetual war. Trump’s criticisms of past presidents and their handling of Iraq and the Middle East was supposed to represent a sea change in American policies of aggression. Instead, his cabinet is now laced with the cancers of neo-conservative warhawks (fake conservatives) and globalist banking proponents.

The U.S. was supposedly mere months away from completely removing its military presence from Syria. Yet a well timed “chemical attack” on a Damascus suburb, blamed on Assad, gave Trump a perfect rationale for keeping troops in the region as well as escalating the use of force through missile bombardment. The original claim under President Obama was that we were in Syria because of the growing threat of ISIS (a terrorist movement supported by western covert intelligence). Now, the new enemy is the target globalists always intended — the Syrian government itself.

When I see news of North Korea abruptly embracing peace talks just after meetings with China and not long after wild threats were tossed around of impending nuclear conflict, I wonder about the true nature behind the abnormal shift in rhetoric. When I see Trump suddenly speaking of Kim Jong-un as “very honorable” after months of trading character attacks on social media, I have to wonder when the next false flag event similar to the Damascus farce will take place?

There are already clear signs that all is not as it seems when it comes to a potential North Korean peace agreement.

North Korea’s offer to halt nuclear testing in exchange for a truce with the U.S. rings a bit hollow when one realizes Pyongyang’s primary nuclear testing site has recently collapsed in on itself from overuse. Any halt on testing by North Korea is likely temporary as secondary sites are prepared.

It also should come as no surprise that North Korea is willing to enter into diplomatic talks only months after achieving successful tests on their first ICBMs capable of reaching the eastern seaboard of the US. Again, as Sun Tzu taught, when you are most dangerous it is important to appear weak to your enemies.

Trump’s newest National Security Adviser and neo-con warmonger, John Bolton, expressed “doubts” in interviews that North Korea will “give up” its nuclear armaments. Bolton and other globalists know full well that North Korea has no intention of disarming, and if this is going to be a prerequisite to any peace agreement then I would expect talks to fall apart before they ever begin.

During initial talks to engineer “peace” in Syria under the Obama administration, the establishment argument was that Assad would have to step down as president of Syria in order for diplomacy to move forward. Of course, as noted above, western covert agencies created ISIS out of thin air just as they created the Syrian civil war out of thin air. They caused an extreme civilian genocide through their ISIS proxies, blamed the Assad regime for the instability in the region and then, when their color revolution failed to unseat Assad, they ask him to relinquish power as a good will offering towards the peace process. See how that works?

Obviously, globalists knew Assad was never going to step down. Why would he when he knows that this was the goal behind the creation of ISIS from the very beginning? And so, Syria remains a useful point of chaos in the globalist arsenal as a larger war is an ever present possibility. It is a perpetual powder keg that could be set off anytime the globalists choose.

Iran is also an excellent example of the fraudulent nature of establishment peace agreements.  The initial agreement arrived at in 2015, called the Joint Comprehensive Plan Of Action (JCPOA), listed a drastic reduction in Iran’s Uranium stockpile and enrichment facilities.  Iran seems to have complied with this request according to initial reports, and has complied with IAEA requests for inspections.  However, globalist peace deals are never fixed – they can be changed at a moment’s notice to facilitate a breakdown in the agreement.

The US has recently made demands for the IAEA to inspect not only Iran’s nuclear facilities but also its military sites, which were not under the original IAEA purview.  Iran, of course, is not too happy about the idea of having its military bases subject to foreign inspections.  US officials have also claimed Iran is not following the “spirit of the agreement”; not because of any supposed nuclear development, but because of Iran’s support for the Assad regime in Syria.

On top of this, the US is seeking to change the original JCPOA while refusing to label the changes a “renegotiation”.  Officials have called for a “supplementary deal”, which to my mind is in fact a renegotiation of the original deal.  This is clearly meant to cause a collapse in the JCPOA, as Iran is unlikely to ever accept a renegotiation.

Finally, Israel is now claiming that Iran has broken the JCPOA by secretly developing nuclear technology.  Once again, like WMDs in Iraq and chemical weapons attacks in Syria, no hard evidence whatsoever has been produced to support this claim.  But, that might not matter at all as Israel has already initiated strikes against Iranian targets in Syria (Syria and Iran have a mutual defense pact), and they may very well attack Iran directly within the next year.

Globalists do not care about peace, they only care about timing their wars properly.  The same reality applies to North Korea. Here is how this situation is probably going to play out…

The Trump administration will enter into peace talks with outlandish demands of complete nuclear disarmament. North Korea has so far offered a freeze on testing, but again, this is probably due to the collapse of their main testing site. A freeze on testing is not the same as total disarmament.

North Korea missile tests will continue, and new nuke facilities will open. Trump will call for the kinetic termination of such sites.

People who actually believe that globalists will abandon one of its best geopolitical Pandora’s boxes in North Korea have still not learned their lesson from the Syrian debacle, or from Iran. These regions represent a gold mine of potential international chaos which can be used as cover for all sorts of misdeeds as well as continued economic decline.

As I have noted in past articles, it is rather convenient for the banking elites at the Federal Reserve that every time they make an announcement of further cuts to their balance sheet as well as continued interest rate hikes a new geopolitical crisis involving Donald Trump simultaneously erupts. Is this mere coincidence, or should we view it as a discernible trend?

If it is a trend, then I would expect further crisis events involving Syria. Iran and North Korea in May and June as the Fed is set to increase the size of its balance sheet reductions thereby pulling the plug on its long time policy of artificially supporting markets. More strikes in Syria as well as destabilizing relations with Iran are likely. A collapse in talks with North Korea should be expected, followed by more plunges in stocks and other assets.