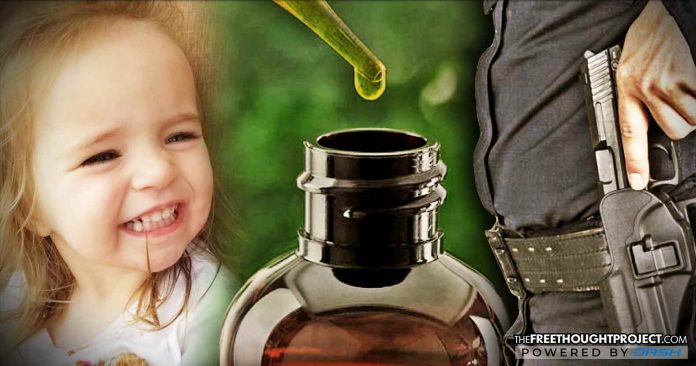 When a mother tried cannabidiol as a treatment for her young daughter, who was having nearly 40 seizures per day, she was amazed by the effects and thought she had finally found a solution after pharmaceutical drugs failed to work. However, after her prayers were answered, the state stepped in and threatened to take her daughter away.

Lelah Jerger’s daughter, Jaelah, began having spasms when she was only 6 months old. Quickly, those spasms turned into seizures and Jaelah was given antiepileptics, pharmaceutical medications designed to control seizures. Not only was the medication not effective, but Jerger said it produced harmful side effects that created even more problems.

After finding CBD oil (cannabidiol, derived from hemp), the concerned mother was amazed by how effective it was at controlling Jaelah’s seizures. Unfortunately for the Jerger family, Child Protective Services (CPS) got involved and threatened to take Jaelah away from the family, all because Lelah chose to treat her daughter’s condition with CBD instead of pills.

In an interview with People magazine, Jerger explained her daughter’s diagnosis, how CPS got involved, and how scary the situation was at the thought of losing her children. She said Jaelah’s epileptic condition was very rare but she was relieved to finally have an answer as to why her daughter was having spasms.

“She has a rare type of epilepsy called benign myoclonic epilepsy in infancy … Finally we knew what we were dealing with, but we were scared because we didn’t know anything about epilepsy at all.”

Doctors, who are only trained in most cases to diagnose and prescribe pharmaceuticals for illnesses, ordered Keppra—the brand name for Levetiracetam. But doing her due diligence and reading the harmful side effects of the drug, Jerger said she became worried when she learned Keppra, like antidepressants, can cause people to become suicidal. Worse still, the pharmaceuticals were not working. Jaelah was still having 40 seizures daily.

Jerger said she began to look for a safer, natural alternative to drugs. She found cannabidiol, purchased it online from a Colorado retailer, and began to give Jaelah CBD drops, twice per day. She said the results were amazing.

“We saw immediate results. We had a 95 percent reduction in seizures right of the bat. We didn’t have any negative side effects. She was a normal 2-year-old! … We’ve had absolutely no difference in Jaelah besides a reduction in seizures. We’re very grateful that we came across it (CBD).”

In March, Indiana legalized CBD for use in the state for certain illnesses, but Jaelah’s condition wasn’t one of the “qualifying conditions” listed. As a result of the legislation, the Jerger family believed giving Jaelah CBD would also be legally permitted. They were wrong.

As The Free Thought Project has reported on numerous occasions, when physicians discover patients have gone “off the reservation” so to speak, and have started rejecting their pharmaceutical options to begin treating illnesses with natural medicine, the authorities are often called.

Jerger made a grave mistake when she told the doctors she found CBD and it was working better than their pills. Even though one doctor initially told her, “If it’s working, use it!” eventually CPS was notified by the doctors and told that the mother wasn’t following standard protocols in giving her child only FDA-approved medicines.

CPS came the very next day. That is when Jerger said her nightmare with the system began. Not only did “Child Protective Services” promise to take Jaelah away, it threatened to take ALL of Jerger’s children away from their loving mother. All of it was done because she chose a safer, natural alternative to prescription pills that were working exponentially better by all accounts.

“[CPS said] … they would take her. We were scared to death that they were not only going to take Jaelah but take our other kids too.”

CPS officials allegedly did not prohibit them from using the oil, but ordered the parents to give the little girl Keppra as well. They also forced the family to submit to weekly drug tests to prove they were, in fact, giving the child Keppra. So without any legal recourse, the parents complied. About five days after the CPS visit, and after forcing the mother to give her the dangerous pharmaceuticals, Jaelah began suffering serious side effects from the drug. Complications arose, almost immediately, forcing them back into the hospital—and costing the family thousands of dollars. The concerned and now worried mother described those fearful and painful days:

“We had to admit Jaelah into the hospital to have her taken off the medication because she was throwing up, she wasn’t eating, she wasn’t acting like her normal self … She would walk around the house crying for no reason. That wasn’t what we were used to seeing out of Jaelah.”

Bravely, and without any regard to the potential legal ramifications, Jerger did precisely what CPS didn’t want her to do—yet what any courageous and loving mother would do. She took her child off of Keppra and then filed a lawsuit against CPS. Now she said she lives in fear:

“It’s a natural fear now. I still have nightmares about [the CPS visit]. I have anxiety about it and I keep my doors locked. The aftermath of dealing with CPS is real, but we’re trying to live as normal as possible…Jaelah isn’t getting high off the product and that’s what makes it legal in our state. Unless you’re walking in our footsteps or have lived the life we live, I don’t think anyone has the right to judge. This is not marijuana.”

The lawsuit alleges that CPS used its bully platform to violate Jaelah’s and the family’s constitutional Fourth Amendment rights against unreasonable search and seizure when it demanded Jaelah’s blood be drawn.

According to the IndyStar:

“the parents claim that the blood draw of their child represents ‘a non-consensual search and seizure without a warrant’ and violates the Fourth Amendment to the U.S. Constitution, according to the 11-page complaint filed Monday.”

The mother, who was only trying to find the BEST medicine for her ailing child is now on the warpath. She said in an interview:

The American Civil Liberties Union (ACLU) is representing Jerger in her lawsuit against CPS. According to court documents obtained by the IndyStar, they allege:

“[The] requirement that J.J. (Jaelah) take Keppra represents an infringement into the Jergers’ fundamental familial relationship and, as such, violated the Due Process Clause of the Fourteenth Amendment to the United States Constitution.”

We interviewed one mother whose 19-year-old daughter is currently taking a prescription for seizures. She does not wish to be identified but relayed to TFTP the following anecdote. She said she had been reading about the benefits of CBD and asked her daughter’s neurologist about the oil. She said the doctor told her there were absolutely no scientific studies published about the efficacy of CBD.

We wanted to test that seemingly false statement so we searched the National Institute of Health’s website. Not surprisingly, in the search results was a study involving seizure patients with intractable seizures. Published in 2018, the study concluded that using a CBD product with a ratio of CBD/THC of 20:1:

“Our results suggest that adding CBD-enriched cannabis extract to the treatment regimen of patients with refractory epilepsy may result in a significant reduction in seizure frequency.”

Seizures were reduced by about half in the 26 patients who were already taking seizure medicines. Who knows how low the seizure rates would have dropped had the study not concluded at the end of 3 months. Not only has CBD been demonstrated to function as a stand-alone antiepileptic, but when used in conjunction with existing seizure medicines there is an improvement in frequency of seizures across a wide range of ages.

It is high time for Americans to be able to approach their physicians without fear that they will rat them out to a bunch of goons who only seem to know how to split up families using the full weight of the government. Both cannabis and cannabidiol need to be reclassified by the DEA as non-scheduled substances and the federal government must decriminalize the possession of the two naturally-occurring plants: Hemp and Marijuana.

No other parent should have to go through the torture of watching a government agency suck blood from their kids’ veins, and threaten to take their children away. Many believe, as critics contend, that the FDA, the DEA, and CPS exist solely to protect pharmaceutical profits. It is not about effective medicine. It is about keeping people addicted and dependent on the pill factories and their white-coated pill pushers. If CPS really cared about the child, in this case, they would not have attempted to force her parents to make her take the medications that harmed her in the first place.

More Trouble for Cuomo as Subpoenas Begin to Fly
May 16th, 2021 Flag And Cross

NY Times: Biden Has A Short Fuse And Swears At Aides When Frustrated
May 16th, 2021 The Lid