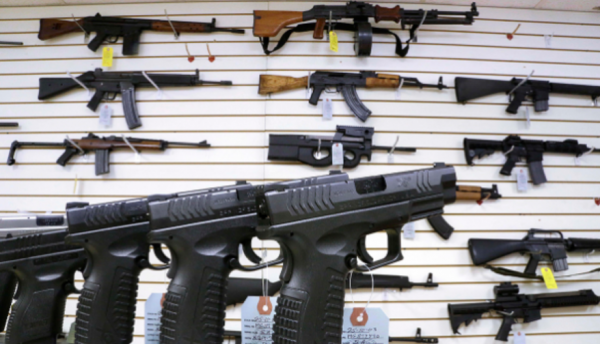 (Natural News) A California Democrat was recently given a platform by USA Today to publish a shocking editorial that calls for nationwide confiscation of all “military-style semiautomatic assault weapons” from law-abiding citizens.

Representative Eric Swalwell from California’s 15th District wrote that all so-called “assault” weapons need to be banned, and that a federal gun buy-back program needs to be instituted in order to effectively collect them all from the citizenry.

Rep. Swalwell even goes a step further, insisting that those who refuse to hand over their “assault” weapons be criminally prosecuted – including law-abiding gun owners who have never been convicted of committing a crime with their legally-purchased weaponry.

Not content to simply impose a fresh ban on all new “assault” weapon purchases, which in and of itself is unconstitutional, Rep. Swalwell actually wants to see door-to-door gun confiscation teams engage in Nazi-style removal tactics in order to rid the streets of all firearms that he personally deems reckless and unnecessary.

“Reinstating the federal assault weapons ban that was in effect from 1994 to 2004 would prohibit manufacture and sales, but it would not affect weapons already possessed,” Rep. Swalwell wrote in his op-ed for USA Today. “This would leave millions of assault weapons in our communities for decades to come.”

“Instead, we should ban possession of military-style semiautomatic assault weapons, we should buy back such weapons from all who choose to abide by the law, and we should criminally prosecute any who choose to defy it by keeping their weapons.”

Democrats like Rep. Swalwell are enemies of the Constitution, and enemies of We the People

Despite the fact that the United States is currently more than $21 trillion in debt, Rep. Swalwell wants to see as much as $15 billion apportioned as part of his plan to seize all “assault” weapons from law-abiding Americans. He’s now proposing that the owners of such weapons be given $1,000 per gun to hand them all over to government officials.

It’s a lunatic idea, of course – but then again, when have Democrats ever proposed something that made sense both from a logical and a practical perspective? The nation’s roads, bridges, and other infrastructure is crumbling, and the only thing that people like Rep. Swalwell can think about is funding efforts to try to eliminate the Second Amendment.

Commenting on the proposal, Orange County Register writer Sal Rodriguez points outthat Rep. Swalwell obviously doesn’t know anything about firearms, nor is he aware of the fact that there’s no such thing as an “assault” weapon.

“While I think the idea of banning ‘assault weapons’ – a category of firearm which only exists in the minds of people who don’t know anything about firearms, based purely on what said people think a ‘military-style’ weapon might look like – is a pointless exercise in government overreach, at least Swalwell is up front and honest,” Rodriguez writes.

“Unlike Sen. Dianne Feinstein’s proposal to merely ban the future sale of ‘assault weapons,’ Swalwell explicitly wants to criminalize any gun which looks scary to him and is willing to spend billions of dollars towards that end and imprison anyone who doesn’t hand over their lawfully acquired firearms.”

What this all suggests is that Rep. Swalwell, and others like him, aren’t at all interested in truth or facts. They have one agenda on their plate, and that’s to chip away at – and eventually completely eliminate – the Second Amendment right of Americans to own the firearms of their choice. This further makes Rep. Swalwell an enemy of this Constitutional Republic, as well as an enemy of We the People who own and operate it.

Read Tyranny.news for more daily coverage of the tyranny of the Left.